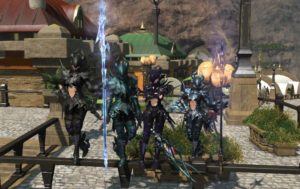 Here is a short guide to the Dragon Knight, for you who are struggling with the number of skills and possible combos of this DPS class. First of all, remove all the ideas received and heard during your travels through the dungeons of Eorzea with other players or even on any forums: the "Dragoon" is by no means a useless class, kikoo, without dps, who spends his time on land. This was the case in Final Fantasy XIV v1 but that time is over and I will prove it to you with the help of this tutorial.

To begin with, a silly but useful question. How to become a Dragon Knight? It's simple, you have to be pole master level 30 as well as marauder level 15 and then do a quest in Coerthas, at the Observatory exactly. The latter will be given to you by Alberic.

How do you use your characteristic points each time you level up? It is of course obvious that you will have to put them in "Strength" in order to gain in hitting power. Don't worry about your health count, it will increase over time, along with your level and gear. It will be more than enough.

Now let's talk about the other important stats that will make your Dragon Knight a war machine.

There are three characteristics in which you can "specialize". First of all, we have "Determination". This directly influences your damage so it will of course be important for your Dragon Knight. Then comes the turn of the "Critical" which will increase your chance to strike a critical hit during a skill or auto-attack. Then the "Precision" without which you will have no chance of reaching your target (this one differs depending on your position and the mission / raid you are doing). We end with "Vivacity" which will allow you to strike faster and reduce the reuse time of your skills. 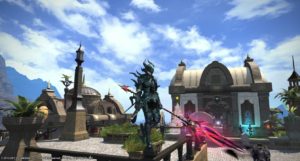 Now let's talk about how to choose your gameplay because, be careful, depending on the region of the world, players do not play the same way. Just because one "build" works very well doesn't mean that the others should be thrown in the trash. We will compare the European and Japanese gameplay of this class. If, in fact, we Europeans favor Determination and Criticism in order to strike very hard but slowly, our friends in Japan will prefer to strike very quickly by making critical attacks using Quickness and Criticism (this gameplay will require a better management of your PT). As you can see, these two ways of playing are very different but, contrary to what the players back home say, they are equivalent. Now the choice is yours. Regarding the Precision, I direct you directly to this link.

Let's take a quick detour to the "cross skills" or talents on FFXIV. Basically, the spells that you will borrow from other classes to optimize yours.

Fracture, a DoT that you will take from Marauder level 6.

Inner looseness, a buff that increases your critical strike chance. This spell belongs to the level 12 pugilist.

Watch, a level 2 Marauder's defensive buff, increasing your defense by 20%.

And to finish, Bain de sang, a level 8 Marauder spell, which will convert 25% of your damage to HP.

Here is now the "tactics" part of this guide. I am going to introduce you to one of the many possible cycles of the Dragon Knight. However, I will only specify here that, even if the positions are no longer mandatory, keep them. Your DPS will only be greater.

In the second part, start by using the "Double Breakthrough" which is a DoT, followed directly by "Balayette" which is a skill outside cooldown, which will allow you to chain the "Fracture" almost directly to your DoT that you have taken. in CrossSkill.

Let's move on with the third part of our cycle. Use "Inner Looseness" which will increase your chance to land a critical hit, a buff that you will obviously have taken in CrossSkill, followed by "Powerful Breakthrough" so you don't lose your 15% damage increase. End with "Blood for Blood", which will increase your damage by 30% but be careful, it will also increase damage received by 15%.

Here is your "burst" phase which begins now that your buffs are in place. Start with "True Breakthrough", followed by "Breath of Power" which will increase the damage of your next jump by 50%, followed by "Vorpal Breakthrough", then "Breath of Life" which will make your next attack a critical hit and which At the same time, you will restore HP (limited to 10% of maximum HP), a critical hit that you will do with your "Total Breakthrough". Finally, use your "Leap" which was previously increased by your "Breath of Power".

To finish in style, here is the last phase of our cycle. To perform the latter, you will need to start with your "True Breakthrough", followed by your "Backstroke Leap" which is your second jump that can stun the target. Follow with the "Vorpal Breakthrough", then with your "Dragon Dive" your AoE jump, to end with, a "Total Breakthrough". After this, the cycle starts again from the start so we will go on a "Powerful Breakthrough" etc .... however all your spells will not be reusable immediately, adapt yourself.

Your AoE (your area effect spells)

Before I leave you, I'm going to tell you a bit about the Dragon Knight AoEs. In addition to being a very good DPS class in Mono Target, it is nonetheless effective in area, less than a Black Mage but it is still good in this area. First of all, you should know that the Dragoon has 3 Area Actions. Every spell in AoE is very different and I'll explain all of that to you right now.

Here is your first AoE, "Rings of Brambles". It's a circular AoE hitting all enemies around you. You can combine this spell with "Powerful Breakthrough" to increase its power.

The Dragon Knight's second AoE attack, the "Point of Destiny". This Action will attack all of your enemies in a straight line, so position yourself well if you use this spell (which is personally my favorite for AoE as it is much more powerful).

And here is your third and final AoE, the "Dragon's Sting". You fire a fire attack on enemies around you by jumping on them, a very effective and powerful attack despite its long cooldown.

To finish with this little paragraph on the Dragoon's AoEs, I will simply tell you to pay attention to your PTs because doing the zone with this class spends a lot of Points, so remember to use your "Motivation" at the right time to avoid not run out.

You now have all the cards in your hand to break everything. To conclude, the Dragon Knight is a class with more than satisfactory DPS and which, compared to other classes of the same genre, has superior survivability thanks to its defensive and healing skills. Plus, if you like classy heavy armor, spears, and slaps, then the Dragoon is for you! 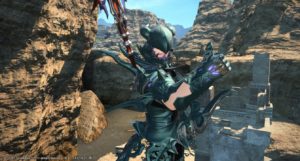