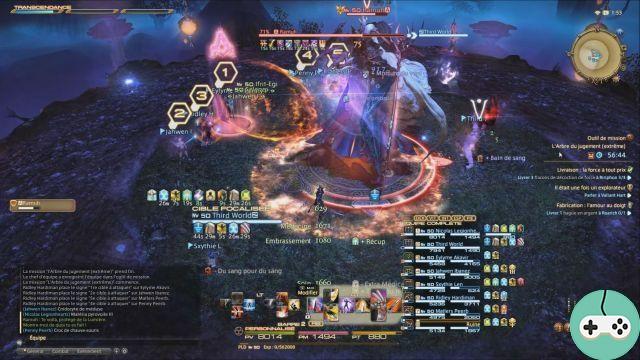 I offer you a short guide on extreme Ramuh, a fight that is not so difficult, however, which puts off some. This fight takes place in 4 phases:

The OT (secondary tank) will quickly take 3 to obtain an improvement protecting it against an ultra-powerful attack from the boss (17 damage!) And take charge of the boss. The remaining orb is eaten by a raid member. Tayo Tayo!

The next pack of orbs is eaten by stopping at 2 charges (even the OT!). Eating more than three orbs grants a healing received debuff (maximum of 3 charges). Quickly, two people are frightened (they are recognizable by their round symbol with a red cross located above their head). They will go to the back of the boss.

The person with the lowest ET number with a lightning zone targeting them personally will go to A and free them from their torpor. HOWEVER, an area of ​​natural lightning damage may very well fall on A and the raid leader will guide the team to avoid crossing multiple of these areas. It's not that it tickles but still!

The current TO will eat 3 orbs and take over the boss.

These two mechanics alternate so well that normally, one spawn of orbs will be eaten by the raid while the next will be used largely by the tank for protection! 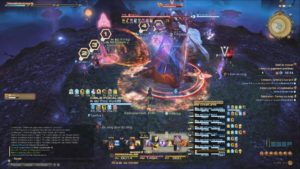 This phase will require killing enemies very quickly. The first thing to know is that you have to anticipate this entry into phase by taking into account two points:

The DPS will have to take care of killing in the direction of clockwise the enemies to lengthen the casting time of the aggravated Sentences of the enemies which will delay the launch of the skill of the boss named: LIGHTNING OF JUDGMENT!

There are always scared people and orbs to deal with.

To facilitate the DPS, the MT can be placed at the edge of the map to take one of the two fear spells and it will be released by one of the boss's attacks after the lightning passes.

The spawned orbs are cleaned.

The MT focuses the enemy from the north. Any DPS is good to take.

Immediately after the new appearance of orbs, the change of tanks will take place. As you will see in the video, I like to take another fear spell and, to do so, I go along the field to the right and I hit enemies in the process (damage over time and company) always to help the DPS.

If all goes well, the enemies will die and the boss will cast his famous lightning bolt of judgment that will lead you to a raid death (wipe) if summoned before all the adds are dead.

The LB can be used at this time if the DPS is a bit tight!

Note: In case you haven't thought about managing the time to free frightened people, there is no stress to be had. During the next fear spell that will take place in phase 3, the two targeted people will not go to A but under the boss and 4 people will be released at once! 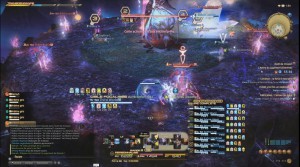 What is marked in phase 3 also works for phase 4, the same mechanics taking place in these two phases.

Just like at the start of phase 3, you will either have to change the tank or load the current MT once more.

The events will always take place in the same order and the actions will have to take place in the same order. This way, the players will have no reason to stress because everything is known in advance. This will prevent budding suicide bombers from eating 2 orbs, dying and then giving their pretty bond to another. Or to see everyone dance the macarena because there are not enough orbs to change tanks and break all the bonds! Come on, a little concentration: it's not me, it's the other.

The mechanics of phase 3 and 4:

Once again, you have to manage to make the phase change after freeing the players from their torpor and breaking the link. 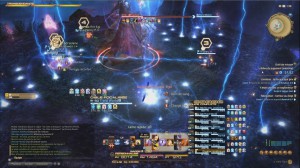 Fourth phase: 29% -Death of the bearded man without summation!

It's time to mow bearded man! There will normally be a spawn of Orbs before they get Bonds again. The tanks will have to exchange the boss. I also recommend not to hurry to change (same thing in phase 3). Gaining a few seconds on the timer can help ensure his back and those of the group.

Regarding the LB. The safest time to use it is either the phase change 3 to 4, or right after cleaning the last orb when the new lightning will appear (between step 4 and 5 of the guide). This will hamper the raid the least. 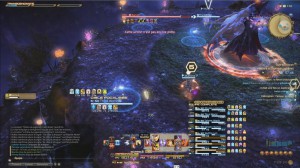 Hope this guide will help you kill him!