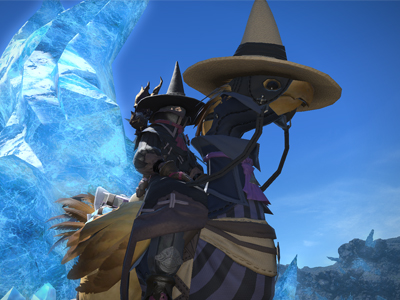 After a small lull, several returns have been published lately. Let's recap it all!

Do you envy the masks of the relay NPCs in Chocobo? The team have not yet decided how to implement this but are investigating the issue!

Let's stay in fashion by talking about the wet effect on our character: for the moment, it would be difficult to implement water drops on clothes. However, the rain will soon cause puddles and footprints to appear if your shoes get wet. 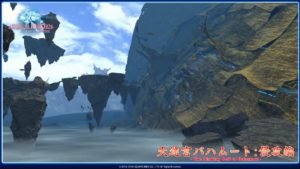 Mounts, Companions and the Mission Tool

Ha, how many times we wished we could use the mission tool with our company out, or be able to use another mount when the Chocobo is fighting alongside us ... We were starting to wonder when his suggestions will emerge . Today, the schedule is unveiled: 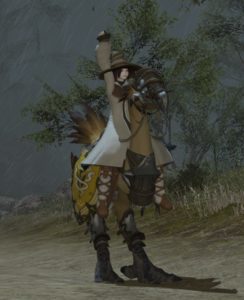 This tool is very practical but can quickly drive you crazy: smart kids have fun using it at any time, just to annoy the whole group. The team is studying this problem and aims to prevent this function from being used in combat for 2.3. In addition, it plans to display the name of the person initiating the call for 2.2.

In the meantime, I advise you to move this window to a corner of your screen to be a little less bored. 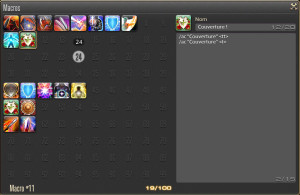 Hiroshi Minagawa spoke on these two topics. He explains that they are currently working to correct the syntax errors for the macros and that those created up to 2.1 can be used as before:

We have started fixing the syntax errors for macros so that they work the same as in Update 2.15.

Thanks to the fixes we are working on, all macros you have created up to version 2.15 will be able to be used as before.

At this time, we are unable to confirm whether macros created after update 2.16 will still work. As soon as we have more details, I will keep you informed.

We apologize for the inconvenience, I will let you know as soon as possible. [/ Lightquote]

Regarding the transfer of data (action bar, macros, etc ...) PS3 to PS4, this is not possible during the beta. The task being a top priority for the team, they are working on it!

[lightquote author = "Hiroshi Minagawa" source = "http://forum.square-enix.com/ffxiv/threads/82871-Pouvoir-transf%C3%A9rer-les-barres-d-actions-en-croix-du -PC-% C3% A0-la-PS3-et-versa.? P = 1871986 # post1871986 "] During the beta test phase of the PS4 version, it will not be possible to transfer local save data from PS3 to PS4. That being said, this is an extremely high priority task for us and we are working hard to ensure that you can move your data right out of the box.

I'll give you more details when this feature has been implemented and tested, but for now I can give you a brief overview:

* All of this is currently in development, so there may be some changes between now and release. Thank you for your understanding. [/ Lightquote]

In the future, rather than using the PSN server, would it be possible to export the data to the FFXIV server and then import it locally? Is this planned?

When we were discussing the specs, we also thought about setting up a specific server for this. Regarding the software implementation, it would indeed be simpler and give us more freedom. On the other hand, we came to the conclusion that the preparation of the installations would not be feasible.

Based on the points listed above, we decided to abandon the idea of ​​a dedicated server to transfer data between different platforms when the PS4 version was released.

As I wrote above, since this is very resource intensive, I cannot make any promises to you and I apologize for it.

We collect your monthly subscriptions and use them for development and maintenance. This is an important resource but it has its limits, and if we were to invest a large part of it just for this functionality, then we would have to give up on other possibilities and other additions.

For these reasons, we will therefore continue to look at methods that do not require a dedicated server. Among these, there are some methods that are relatively difficult to implement but the operational cost of which is quite low. [/ Lightquote]

What do you think ? Do not hesitate to react !

Add a comment from FFXIV - Return # 19: Compagnon and CL