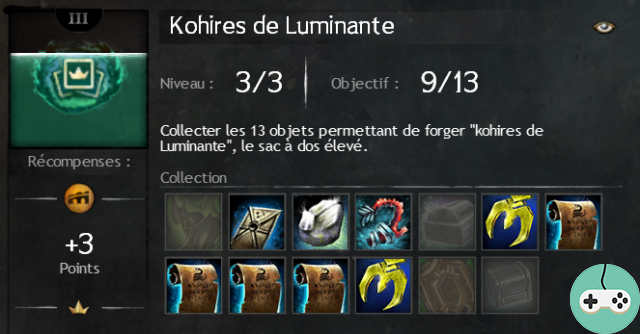 We meet again today for the guide on Kohires high back of luminante. At the end of the collection, you will have the choice of statistics in that of Central Tyria. This back is done in two steps but can now be done independently: 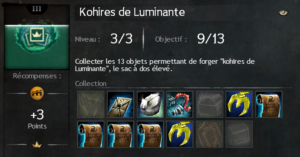 This collection aims to unlock all 16 auric weapon skins. Completing it will reward you with the exotic backpack " Kohires Auriques ». There are 3 ways to move forward in this collection:

The Auric Basin reward course (unlocked by completing the Emerald Orée) will allow you to obtain a weapon of your choice as well as a charged core recipe (See Crafting) in the middle of the course. Unfortunately, this course is not repeatable. Conversely, the Heart of Maguuma reward course which also offers auric weapons (as well as chaks weapons) is repeatable.

It is advisable to take a weapon with two hands because the cost of manufacture is the highest.

If you opt for the third solution, first know that it is the most time-consuming and expensive of the three. You will first have to have characters with professions related to creation (hunter, artificer and blacksmith of weapons). Each of the weapons will require the following components: 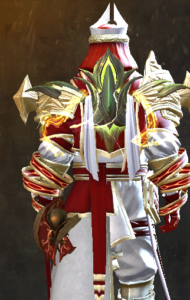 Do you want to be up to date and know all the tricks for your video games? In gamesmanagers.com we enjoy playing as much as you do and for that reason we offer you the best tricks, secrets or tips for you to play non-stop. We offer you quality content and always updated to keep you up to date. That's why, in our website, you will find not only videogame guides but also tricks, secrets and thousands of tips so you can play to the limit. Are you ready to get it? Enter now and enjoy your videogame!
SWTOR - 4.0 - Cartel Market ❯