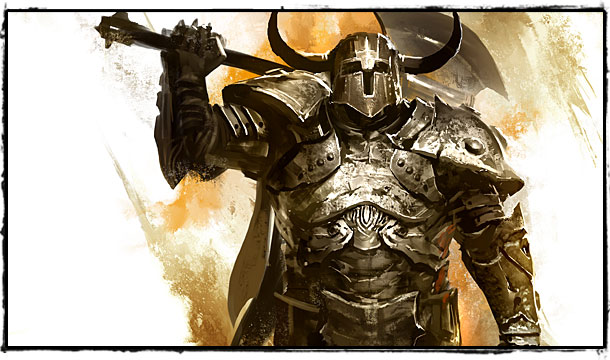 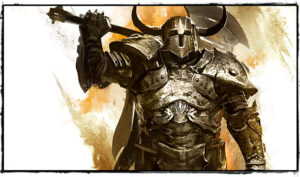 The Warrior is an expert in weapon handling and relies on his speed, strength, toughness, and heavy armor to survive in battle. He can take a lot of hits in the heat of the moment, while also ramping up his adrenaline to deal more damage.

The Warrior can wield 9 different weapons, including 1-handed weapons, 2-handed weapons, ranged or melee weapons, a shield or a war horn. A total of 19 possible combinations. The warrior is therefore both formidable and versatile in his handling of weapons.

2-handed weapon.
To handle a longsword is to take the risk of being carried away by the blow, unless precisely taking advantage of the inertia of the blow. Thus, the Warrior who uses this weapon will use his momentum to deliver area-of-effect sweep attacks while moving.

2-handed weapon.
The hammer allows whoever wields it to knock down enemies with AoE attacks by hitting the ground.

2-handed weapon.
The rifle is a single target weapon that can attract an enemy or finish off a cowardly fighter.

1-handed weapon. Main or secondary hand.
The ax is the prerogative of those who favor force over tactics. It allows you to accumulate adrenaline more quickly and to carry out devastating attacks.

1-handed weapon. Main or secondary hand.
Mace will be a dreaded weapon of spellcasters, allowing skills to be interrupted by knocking out victims and making them more vulnerable to additional attacks.

1-handed weapon. Main or secondary hand.
The sword brings speed and mobility to the warrior. Associated skills allow enemies to bleed, while leaping from target to target.

Secondary hand equipment.
When the Warrior is equipped with a shield, he can decide to block projectiles or spells. Any hit that is blocked deals less damage.

Secondary hand equipment.
The war horn, when it is worn by the warrior, brings in particular the possibility of increasing his damage.

The harpoon is a long-range mechanical weapon.

A Warrior can easily change the active weapon set in combat, but it takes a cooldown to allow them to change them again to prevent Warriors from constantly switching between their weapons. However, a Warrior can equip the Weapon Mastery ability to bypass this cooldown and opt for a more back-and-forth style of combat with both sets of weapons. When not in combat, the Warrior can reconfigure their weapon sets before embarking on battle.

warriors can start combat without adrenaline and level it up with each attack they make. Warriors have three stages of adrenaline that require an increasing number of hits to complete, and can release the accumulated adrenaline using a shattering skill. Each level of adrenaline also grants it a passive bonus to damage for each attack it hits.

These skills release all the adrenaline accumulated by the warrior. Each weapon has a shattering skill that improves with each level of adrenaline. This buff can be increased damage, adding additional conditions, lengthening conditions duration, or increasing the duration of a skill.