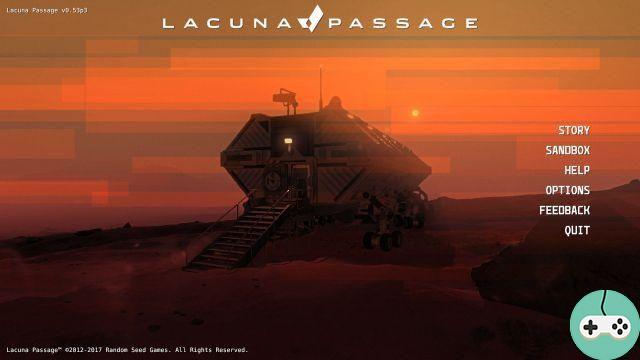 Even if Lacuna Passage is only scheduled in early access for Wednesday May 17th, I had the opportunity to play it in preview at the beginning of May. The opportunity to take the first step on the surface of the Red Planet!

The idea for Lacuna Passage was born with the successful landing on Mars of the Curiosity rover in August 2012. What started out as a small project carried by a few volunteer contributors grew rapidly, attracting the attention of passionate players. A successful Kickstarter campaign in July 2013 saw the team raise $ 54 and get the game approved on Steam Greenlight shortly thereafter. Random Seed Games from there becomes a full-time team made up of project creator Tyler Owen, his brother, Spencer Owen, and an artist.

Now that you have a better position on the project, let's get started! Immediately, right off the menu, I find myself in the Martian vibe of the title thanks to pleasing graphics and relaxing classical music. 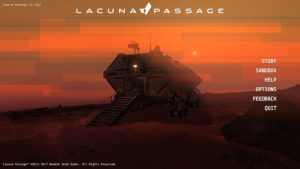 By the way, if you want to get into the musical mood as well, here's a YouTube preview of the soundtrack. I advise you to let the video run in a loop throughout your reading for better immersion.

A little tour on the side of options summarizes the shortcuts. You will notice the integrated possibility of taking photos (screenshots) which are directly stored in the game directory, on your computer, but also viewable from the game interface. 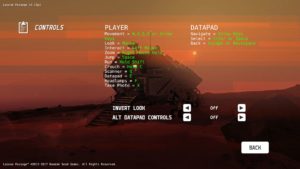 In the story mode, expected in a future update, we will follow the adventures of Jessica Rainer, the sole survivor of the Heracles mission crash whose objective was to investigate the disappearance of the first manned mission to Mars. With several tools at her disposal and especially her sense of observation, Jessica will have to find all the evidence that can help her understand what happened to the last humans on the planet. But, for the moment, only the fashion sandbox is available where we wake up in a landing pod. Our mission is to check the equipment and venture out on Martian soil in search of habitats. On more than 40 square kilometers of land to discover, it is necessary to recover resources in random points of interest, equipment caches and other inhabitants in order to survive as long as possible. 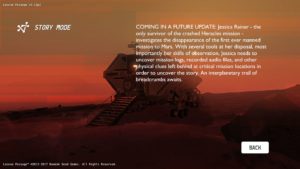 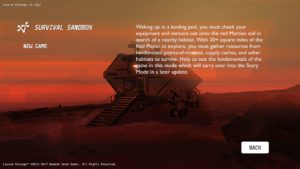 Although this is rather rare in an open world, the tutorial explains the basics of getting started with the character. Simple and effective, a set of objectives guide me in my first Martian steps. The character moves using the keyboard keys (direction keys or WASD). He sprints with the Shift key and jumps with Space. The scanner (Q key) is essential to navigate because, it must be admitted, even if the landscapes are magnificent, there is a certain monotony. Wherever you look, a huge desert of red pebbles that does not help you find your way around. 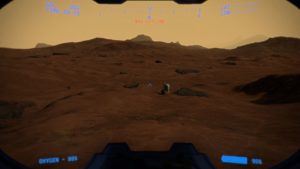 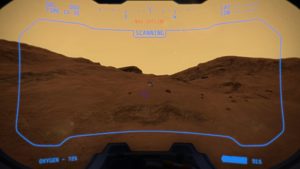 Le datapad opens with the shortcut E and gives a whole lot of various and varied information on our environment (map, weather forecast), but also the inventory and the vital constants (with a precision rarely seen going up to the glucose level in the blood). The mouse cannot be used, navigation is performed on the keyboard with the arrow keys, Enter or Space to select. This allows you to open the datapad while doing other things. Some shortcuts allow direct access to key elements: I (inventory), K (documents), N (navigation), P (photos), O (weather forecast). 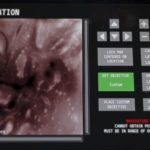 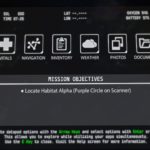 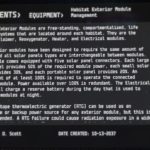 Following the indication on my scanner, I arrive at the first habitat, a large structure placed in the middle of nowhere and surrounded by equipment. 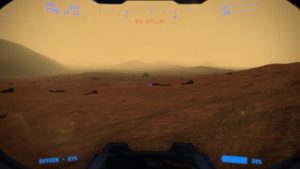 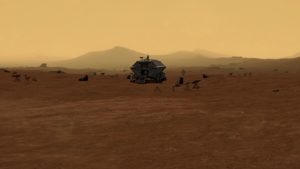 This structure has all the equipment necessary for my survival, providing electricity thanks to solar panels, water thanks to a station extracting it from the ground and oxygen. Thus, thanks to the survival rations in my possession, I have all the basis to survive! 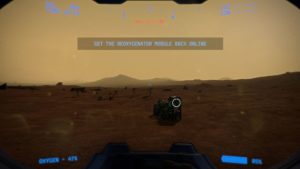 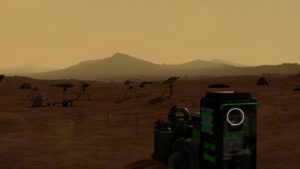 All of these devices are offline when I arrive, so I go around to turn on the button and check the status of the pieces of equipment. 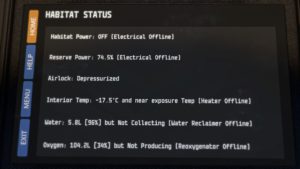 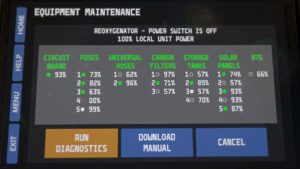 As you can see, the game is based on quite complex mechanics, with each key piece of equipment consisting of components with Sustainability. It is therefore necessary to monitor their condition using the diagnostic tasks and possibly repair. To find your way around, the manual gives the details. For example, here is everything there is to know about the device that creates water. Everything is not mandatory, the device will sometimes work without certain elements, without being 100% operational. For the moment, I don't have too many worries, all the equipment is still in good condition, but you can imagine that to survive longer, each component will have to be used to the best of its abilities and a real puzzle will arise to find the best compromise. 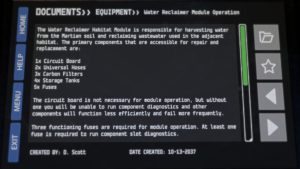 L'shooting is simple but in good condition. Again, there is everything you need to get started in Martian life with a bunk to sleep in, bottled water, food and spare parts. Excellent opportunity to introduce you to the inventory which, like the datapad, works exclusively with the keyboard. It is possible to transfer objects at will from storage spaces to inventory and vice versa, switching from one mode to another using the Tab key. And depending on what we put in the cupboards, the appearance in the world changes. 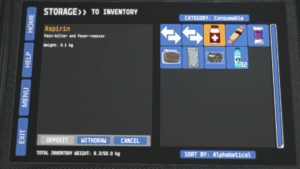 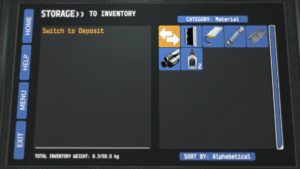 Two stations at the bottom of the habitat provide access to thecrafts (I haven't discovered any recipes yet) and recuperation (component extraction), taking thinking to an even higher level, where it is no longer just necessary to think about the components in your possession, but also about all objects in a more general way, and all the components that can be extracted, and how those elements themselves can be reused. Oulala! 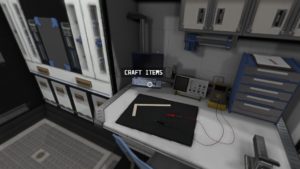 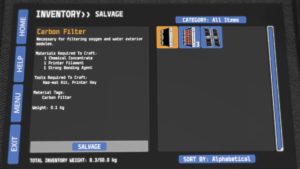 Of course, it would be too simple if we only had to manage the habitat and its components (!). It is also necessary to manage vital constants of our character whose organism is put to the test in the vacuum of space. You have to eat, drink, sleep, and make sure that he does not fall ill thanks to a multitude of data ... 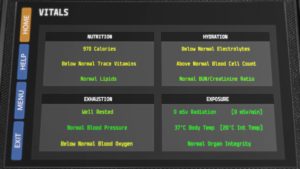 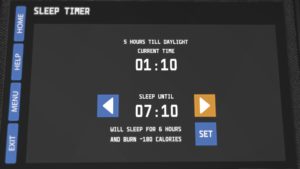 The planet is big, gigantic and, at the risk of repeating myself, the views are magnificent. It's not every day that you can see this! 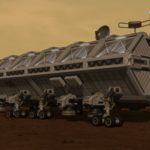 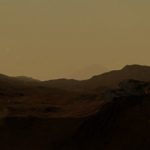 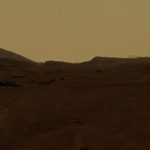 Pretty and well designed, Lacuna Passage has everything to convince fans of survival in a hostile environment, totally embarking on the stressful atmosphere of the desert immensity of Mars. It's already particularly well finished for a game that hasn't even kicked off Early Access, which is even impressive (how many supposedly finished games are coming out in a much less complete state). The tutorial allows you to quickly understand the basics and not to wander on this gigantic planet without understanding, thus offering a more than correct lifespan, even to beginners (or not gifted in survival). Accessible, it still offers a much more complex second reading thanks to all the elements to take into account, offering players seeking to optimize real metrics to manage. If you feel like exploring, do not hesitate, the game will be available very soon on Steam:


Do you want to be up to date and know all the tricks for your video games? In gamesmanagers.com we enjoy playing as much as you do and for that reason we offer you the best tricks, secrets or tips for you to play non-stop. We offer you quality content and always updated to keep you up to date. That's why, in our website, you will find not only videogame guides but also tricks, secrets and thousands of tips so you can play to the limit. Are you ready to get it? Enter now and enjoy your videogame!
ESO - Crown Store - October 2 ❯