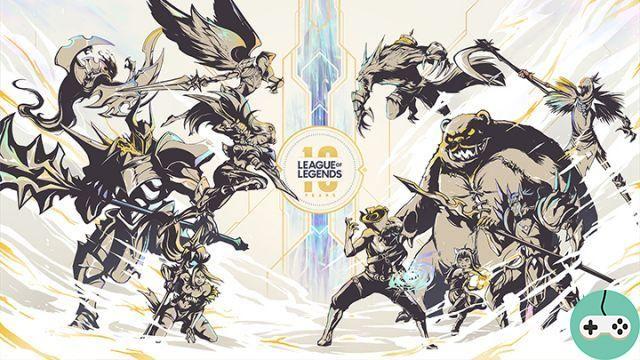 It's been ten years since millions of players clash in Summoner's Rift, often passionately, sometimes vehemently, League of Legends brings together a large community and Riot Games (Tencent) seems more than inclined to continue the adventure for a good decade: as evidenced by the announcements of this night which have made vibrate the hearts of many players.

Quite honestly, I was sleeping at this late hour. However, I did my homework when I woke up, so I can offer you a little recap of the announcements!

It is now confirmed, Senna, the companion of Lucian, is the next champion to join the League of Legends roster. Many leaks and a recent teaser had already largely contributed to guessing the identity of the next character to join the Rift. The confirmation allows us to learn a bit more about Senna, which will be a support ... playing with shooter mechanics. A curious mixture that we will be able to test from next October 29, on the PBE (test server). The character will be deployed on live servers on November 10.

On the new side, we can also count on a significant evolution of the Summoner's Rift. The card will indeed have small indentations on the bottom and top lines. Dragons will also be recast and impact the map. Depending on the aspect of the dragon, the jungle will be modified, with the appearance / disappearance of certain obstacles. All the changes can be viewed on the title's official website. You can test this from October 22 on the PBE. The pre-season patch will be deployed on November 20, 2019.

The famous URF (Ultra Rapid Fire) mode will also be back. As a reminder, this is a mode where the cooldown of skills is reduced by 80%, and where the resource cost of skills is removed. In short, a happy mess.

Finally, a series of gifts will be made available to players for 10 days. Starting tomorrow, all you have to do is log in and play a game to receive a gift. The only condition being to have a Riot account created before 16/10.

Available for several months on PC and MAC, the Tactical Combat game mode (inspired by the mod Auto-chess originally appeared on DotA II) will be ported to mobile during the first quarter of 2020. It is already possible to pre-register on the Google Play Store. Note that the game will be enriched on November 5 with a new set of champions. The publisher also mentions that new sets of champions and skills will arrive at a regular rate of 3/4 months.

Claimed by some players for years, Riot will finally offer a revised version of its MOBA on mobiles and consoles. The development team makes it clear that this is not a basic port of its title. Wild rift has in fact been designed to be playable with two joysticks. The map loses a little in complexity and the rhythm of the games will be accelerated to adapt to the supports of the game. However, we are promised a deep game, with forty champions at launch. More information to come in early 2020. Pre-registrations are already possible on the Google Play Store.

Do you like Hearthstone? Do you like Magic? Maybe you'll enjoy Legends of Runeterra, the new card game from Riot Games even more! The publisher does not seem satisfied with the market's proposals, and seems to offer an interesting mix of the two aforementioned titles. In short, an accessible and deep title. The title will be available on PC, Mac and mobile during the year 2020. A beta phase will begin soon. You can now pre-register at: https://playruneterra.com/fr-fr/

Did you dream of it? They did it ! An animated series league of legends will be released next year, looking back on the origins of two well-known champions of the game. The opportunity to see a little more about two intriguing regions of Runeterra: Zaun and Piltover.


Another production has been uploaded to Netflix today. No animation here, since it is a documentary directed by Leslie Iwerks, which looks back on the advent of the game and on the testimonies of the community around the title.

Project A, L and F

Three other projects were also discussed during tonight's event. Project A is the most advanced, it is a tactical shooter totally detached from the universe of league of legends. The game wants to be the spiritual successor of Counter-Strike (just that) while taking up the principle of hero-shooter (Overwatch / Paladins ...). The development team is made up of several veterans who have worked on some well-known FPS, such as Call of Duty, CS: GO, Destiny or Halo. To be continued!

Project L is a fighting game still in development, and project F will offer the possibility of visiting Runeterra with our friends, so we can hope for an MMO!

Probably the most surprising announcement of the evening. LoL Sports Manager is a title in development which will propose to manage a professional team evolving on league of legends. The release is scheduled for next year on PC and MAC.