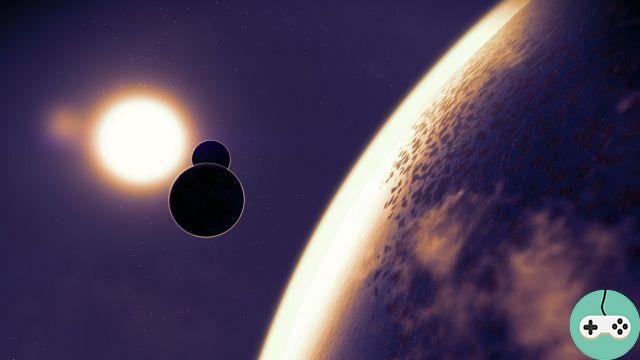 You can join the game at the best price thanks to CDKeys!

After the galaxies and the systems, here comes the time of the cathedrals the guide on the planets.

In No Man's Sky, to say that there are a lot of planets would be an understatement, there are a total of ... 18 446 744 073 709 551 616! Well, no need to lie, it will be impossible for anyone to visit all these planets, but also, given their huge number (procedurally generated, like the vast majority of the game), it is possible to come across planets that may be similar.

Each planet (and moon!) Has a different size and color, as for the planet itself (flora and fauna), this is linked to one of the 9 biomes. Planets also have a day / night cycle, the latter being more or less the same for all planets and moons. A complete cycle takes approximately 1 to 2 hours, or approximately 15 minutes during the day and 15 minutes at night, in real time. 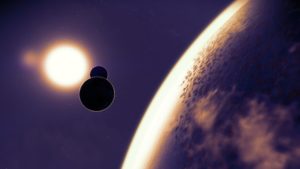 It is impossible to know what type of planets are in a system until you are there, although depending on the type of star the system has (and the type of galaxy) you are more likely to come across biomes. specific. Once in a system, there are two ways to get information from a planet. The first is to scan it from space, targeting it. And the second is to simply land on the planet, which will automatically give information on the latter. Be careful, however, the information obtained on the planet only concerns certain points, namely:

Everything else, such as flora and fauna, will not be revealed. The only way to find out is by scanning them through your character's visor.

There are a total of 9 biomes in the game. Each biome has its specificities. The biome is what influences the type of the planet, but also its resources, its appearance, and its climate. On the other hand, the weather conditions can be different from one planet to another, even if the biome is the same. It is the “intensity” of the meteorological effect which is determined by the climate which is defined by the biome. Note that the biomes are the same whether it is on a planet or a moon. There is no specificity on one or the other. 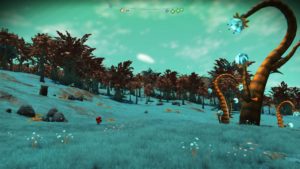 The (for my part) most beautiful existing biome. These biomes offer planets with very lush flora and fauna. These are planets with an Earth-like biome. There are large green plains as well as large forests. It is also the biome with the most types possible (I explain the types in detail below!) These planets are mainly found around yellow stars.

The climate is of the "Temperate" type, it is a moderate temperature both day and night. As for weather conditions, it can happen that these planets experience storms with high heat.

Resources are very abundant there.

When scanning the planet from space, these can appear under the following name: 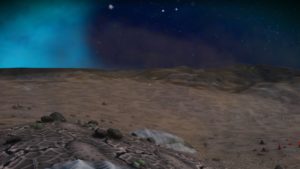 As the name suggests, do not expect anything joyful in these worlds. On these planets there is no flora or fauna, no atmosphere and very low gravity and you will have a direct view of space. It is also the one and only biome on which there will never be any structure or construction, no climate, and no weather condition. In addition, having no atmosphere, the survival system will be put to the test!

The climate is of the “Temperate” type, even if no climatic condition is present, because of the particularity of the biome.

In return, these planets often have more resources, and in greater quantity, than in other biomes.

When scanning the planet from space, these can appear under the following name: 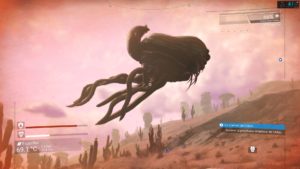 These are the most common biomes. These have a very rocky surface and seemingly desert. Fauna and flora are present in small quantities. The climate is of the “unstable temperature” type, that is to say pleasant during the day, but the nights are relatively cold. On the other hand, these planets are often subjected to extreme weather conditions. 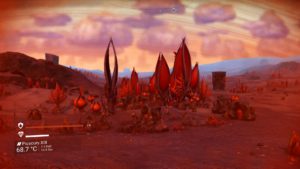 The resources are in average quantity. 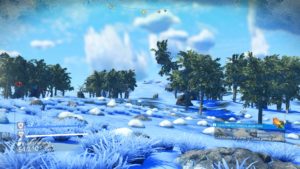 Do you like Eskimos? This biome is for you. The frozen planets, whose climate is of the “Frosty” type, offer sometimes magnificent landscapes. Worlds visually look a lot like lush worlds, but covered in snow. These worlds are often subject to snowstorms, and temperatures can drop to -100 ° or even more. 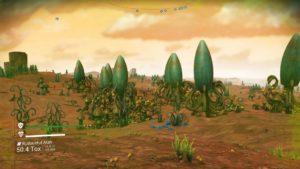 Toxic planets are ... toxic! ? These are very inhospitable and toxic rain falls there almost continuously. The climate is of the "toxic" type. The flora and fauna of these planets are strange and wacky in appearance. 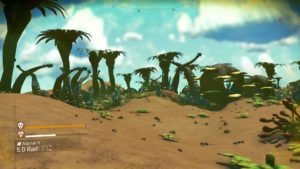 Irradiated planets are as dangerous as toxic planets. This biome has a "Radioactive" climate type. This biome is just as inhospitable and you will be in constant danger from radiation, which causes the flora and fauna to be very distorted. 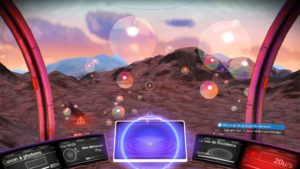 It is the strangest biome of all. Exotic biomes are extremely rare. The exotic planets have neither fauna nor flora, but are covered with an anomie among the 6 existing (and specific to this biome): 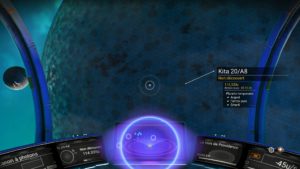 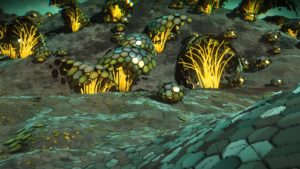 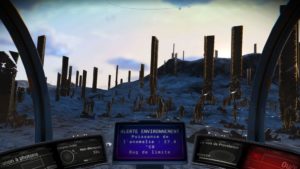 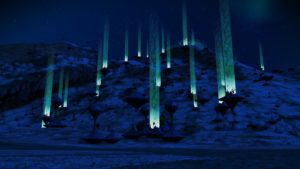 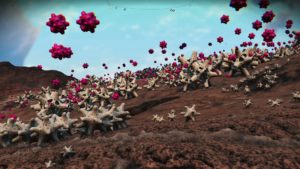 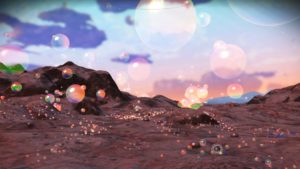 This biome was added with the Next update, released in July 2018. This biome is an Exotic-type biome, except that the biome is similar to that of a "Luxuriant" type and everything that makes up the latter ( especially the flora) is gigantic. Trees, plants, rock formations, etc. everything is disproportionate in size. In addition, the atmosphere of the planet can take on a completely orange hue, or a black and white hue. It also appears to be even rarer to encounter than "classic" alien biomes.

Each planet has its own climate, but also its meteorological effects. Climate is linked to the biome, while weather effects are linked to both the climate and the biome. So, on a frozen planet, you will never have a firestorm (effect), but you can have an extreme (climate) or occasional (climate) snowstorm (effect).

There are 3 possible climates:

Note that on “dead” and “exotic” biomes, although they may have a climate, storms do not exist.

It is tempting to think that we must avoid at all costs planets with an extreme climate, but the latter are those which have rare and precious resources in quantity! 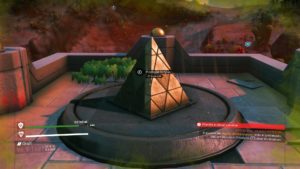 There are a huge number of sub-designations for all weather (climate-related) effects, almost 300! Designations you can get by scanning a planet from orbit or using your visor while on the planet that will appear in the style of: desiccated, sorry, flooded, high radioactivity, extreme acidity, wet, corrosive cyclones, toxic rain, blizzard, peaceful, alkaline storms, scorching, sweltering humidity, freezing rain, frozen, highly variable temperatures, hell, irradiated, etc. In short, you see the genre! And some can apply to several types of climates. 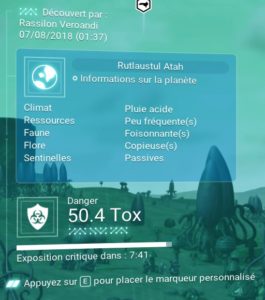 So, if you want to know what level the sub-designation of the planet you are on relates to, refer to temperatures / radiation levels / toxicities.

Please also take into account that it may happen that planets accumulate several weather effects. For example, you can land on a planet with a charred biome, and notice a level of toxicity AND radiation, which can sometimes even cause you to activate several of your shields at the same time (toxic and radioactive shield for the present example), and even have a high temperature which will also activate your heat shield as a bonus! Although these situations are rare and mainly concern climates of level 3 (extreme climate), you must remember to check all these conditions, especially if you want to settle! 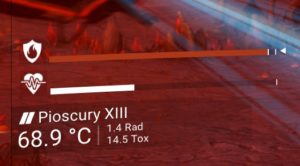 These storms can be encountered on planets with a charred biome.

In these climatic conditions, the protective shield is triggered if the temperature exceeds 30 ° C.

These storms can be encountered on planets with a frozen biome.

In these climatic conditions, the protective shield is triggered if the temperature drops below -20 ° C.

These storms can be encountered on planets with an irradiated biome.

In this climate, the protective shield is triggered if the radiation level reaches 4 RADS.

These storms can be encountered on planets with a toxic biome.

In this type of climate, the shield activates if the toxicity rate is greater than 40 TOX.

These storms can be encountered on planets having an arid type biome and, sometimes, also charred.

In this type of climate, the shield activates if the temperature exceeds 30 ° C during the day and if it drops below -20 ° C at night.

These storms can be encountered on planets with a lush biome.

In this type of climate, the shield only activates during storms. Outside of storms, the temperature is always bearable day and night.

You can join the game at the best price thanks to CDKeys!


Do you want to be up to date and know all the tricks for your video games? In gamesmanagers.com we enjoy playing as much as you do and for that reason we offer you the best tricks, secrets or tips for you to play non-stop. We offer you quality content and always updated to keep you up to date. That's why, in our website, you will find not only videogame guides but also tricks, secrets and thousands of tips so you can play to the limit. Are you ready to get it? Enter now and enjoy your videogame!
The Sims 4 - Bowling Night Stuff Pack Preview ❯

Add a comment from No Man's Sky - Planets Guide