Paragon - How to get started in the game 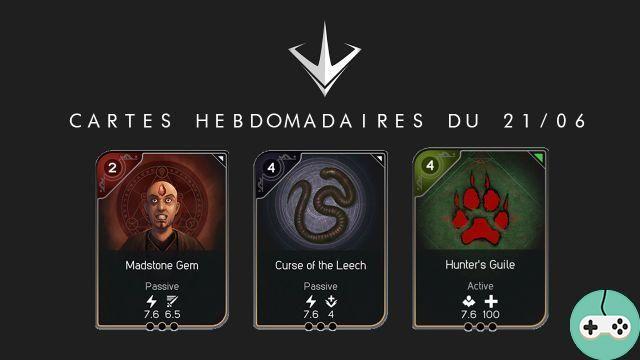 Paragon saw its open beta arrive two days ago. With a dark jungle and a card system difficult to understand for beginners, the MOBA from Epic Games can be tricky in its learning. Luckily, our friends at War Legend are here to help you sort it out. You can also find a "version" of this guide on their YouTube channel as well as many videos allowing you to better understand Paragon and its champions.

I run the game, now what?

The first thing is to avoid throwing headlong into player-versus-player games. Starting by playing against bots is quite important for getting to grips with the title. You can then take the opportunity to stroll in the jungle, get to know its nooks and crannies, train with heroes belonging to different roles to determine the one that suits you best, and finally experiment with your own builds, aka decks, we are there. will come back.

Since Paragon is played in third person view, you will need to aim correctly. Which is not necessarily done instinctively at the beginning. Indeed, if the basic attack is very natural, the spells are sometimes quite hard to master and will require some practice on your part, but rest assured that it comes very quickly!

Finally, note that it is interesting to touch all the characters, ideally by raising them to all rank 3. This level represents a kind of level: at this stage, you will know the character well enough to play him effectively and, in addition to that, every time a character reaches level 3, you get a free card pack. This will allow you to expand the list of your equipment and upgrades available to create your builds.

Experience at all levels

So you can make different characters gain levels.

Your account also has a level. Each additional tier reached in the account experience will earn you bonuses like card packs or reputation (the in-game currency).

If a match results in a victory, you will get more XP than if you lose. To summarize, at the end of each match, your hero sees his experience bar fill up and possibly pass a level, with all the bonuses that this includes - level 10, the last, allows you to get a free master skin. On top of that, your player level increases and gives you rewards as you progress up to level 50.

One important thing to note: all the heroes in Paragon are free, you don't need to buy them to play them. However, this is only valid up to their level five.

Take for example Gideon ... You find that he is assertive and you decide to play this charismatic hero. When you reach champion level 5, their experience will no longer progress - but you can still continue to play it - until you purchase the right to go up to level 10. You can do this either with your wallet , or with reputation, virtual currency obtained through matches, weekly quests and player level crossings.

Weekly quests? Yes my good sir / my good lady. Each week, four new quests are available to you. The first that you complete brings you the three displayed cards then each new mission that you chain brings you a random card. 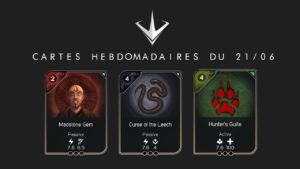 Half Magic, Half SMITE

While the comparison is far from accurate, anyone familiar with these two titles will understand the hint. Indeed, unlike other MOBAs, that of Epic Games does not have an equipment dealer strictly speaking. Your items during games will depend on the cards you have. You will need to create optimal decks for each character, much like HeartStone.

It is you, and you alone, who determine the equipment that you will be able to obtain during your game. Already prepared beginner decks are available and I advise you to experiment with them to see the statistics that your hero will particularly appreciate. For Gideon it will be mana and energy damage, for Twinblast it will be attack speed and physical damage, etc. If you feel ready, you can go to "Profile" then to the "Decks" sub-menu to create a new deck of cards, which you must necessarily assign to a hero.

From there, remember especially that Paragon will make you work your mental arithmetic: in each game, you will never exceed level 15 and the 60 power points (the "currency" to buy cards in part). Therefore, keep in mind that the total cost of your final build cannot exceed 60. The cost of a card is shown at the top left of the card. Whenever, while building a deck, you click on an equipment card to add it, you can add several upgrades that are actually stat boosts, also take their cost into account. Overall, you won't be able to have more than three cards that cost 3 with three upgrades that cost the same.

Once in play, the chosen deck cannot be changed under any circumstances. It is therefore essential to fully understand how this system works.

For the creation of a new deck, I invite you to consult the guide of Superwho? dedicated entirely to the card system.

Some upgrades will be more effective at the start of a game and will not cost much, 1 or 2 power points maximum. Going on these cards allows you to fill your "items" more quickly and thus have an advantage early in the game. Other cards or upgrades will have a big value, from 5 to 8, and will give big bonuses when complete, but it will take time and a lot of credits to fully benefit from these, knowing that these cards are rarely worth the blow (or cost, suddenly ... cost?). 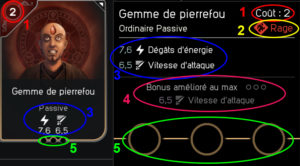 I get lost all the time in the junbirynthe

The jungle is probably the biggest challenge when starting out on Paragon. Complex, beautiful and dangerous, the part of the map that separates the different lines is conducive to traps, and it is difficult to navigate.

There are different types of monsters in the Agora Jungle:

In general, be aware that the colored orbs dropped by these monsters fall to the ground, you do not automatically recover them for having killed the creature that carries it, except in the case of purple. Walk on it to take possession of it and be careful not to get slain, because an enemy who picks it up on your still warm body restarts the disappearance time of the orb, which means that it benefits from the total and initial duration. of the bonus.

The purple, called Prime Orbe, is the most important improvement in the game. Unlike the others, it is attributed directly to the player who killed the big daddy (we'll call it that). From there, two choices:

Note that to drop the orb and entrust it to an ally, all you have to do is press your return to base key.

You'll notice two targets to drop the orb: the one closer to the opposing side activates the ultimate cards for all of your living team members, the one on your side of the map removes super minions and spawns inhibitors (yes, c is the only way).

We also find what looks at first glance to a pond of shadows. These are in fact what one can relate to "bushes" in other MOBAs. You just need to go to these areas to disappear from the radar and out of sight of your enemies. Be careful though: attacking or casting a skill from these locations removes the camouflage ... and for your entire team. Aside from champions, the last thing to be found in the woods, as long as the wolf isn't there ... are the reapers. These items provide a source of income other than kills or minions.

They are found in various strategic places in the forest: 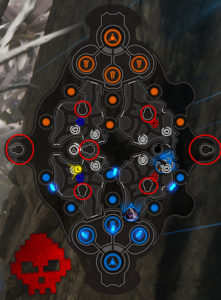 To create a reaper, you must stand on the appropriate small circle and wait for the end of the count. Preferably, only do this if you have a "key" card, which will allow you to build reapers much faster, otherwise the delay is far too long and wastes your time.

There are many entrances to the jungle, since one can even jump into the jungle from the left, right and middle lines. The exits, meanwhile, are rarer and often constitute large crossroads that do not announce much other than fighting and blood. This is why I refer you to what I mentioned a little earlier: take a few games against bots to wander in this forest and familiarize yourself with its environment.

If you are looking for a specific guide to "playing Tarzan", I have put together a very nice and clean one for you.

About the author of this guide

Author Crapelle and SuperWho ?. War Legend is an association of Video Games enthusiasts, with a site on game news, complete guides and a WebTV for live streaming.