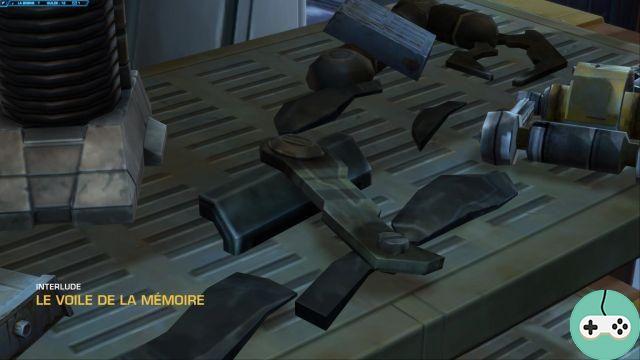 With the implementation this afternoon of update 4.7.1, the bonus chapter where you can play HK-55 is finally available. This chapter is only accessible free of charge to people who have been subscribed without interruption between January 12 and August 2, 2016. It will also be necessary to have completed chapter 9 as well as the alerts "The Tracker tracked" and "Arma Rasa ". 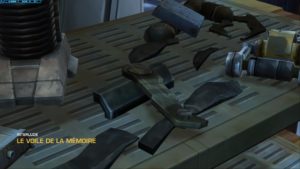 Start by going to your personal vessel. A new quest working on the same principle as the chapters of KOTFE is available: The veil of memory. Accept the quest and click play to start the chapter. Its follow-up will be separate from the expansion story. The two quests don't seem to be linked, and the choices you make are unlikely to affect the next expansion. 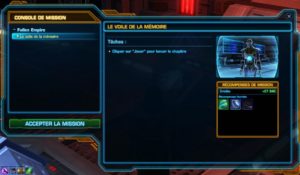 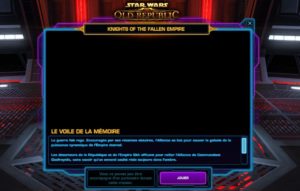 During this chapter you will take control of HK 55 as it was announced. The interface is changed during the chapter. You now only have access to a single spell bar with all of HK-55's abilities. You will not have energy management and the statistics displayed in the character sheet are those of your character. The available capacities can be classified into 3 categories:

HK has two abilities, the main advantage of which is mobility in combat. He can jump on an opponent with one or move away with the second. Its survival capacities are limited and hidden for as long as you don't need it. Finally its damage capacities are simple but very effective. Moreover these capacities have the merit of being in adequacy with those of the HK partners which will certainly please the followers of PR.

HK has a general reach of 30 except on her dowry which is limited to 20m. I advise putting the dowry first and reusing it as soon as possible so that it stays on your target. Then favor the attack spell that it unlocks and avoid the area spell in confined spaces. Some opponents may find themselves thrown through ceilings or walls which will prevent you from eliminating them.

Warning this part includes spoilers on the history of the chapter.

At a glance - Light spoiler

HK-55 was captured and its memory copied and analyzed. His torturer plans to infiltrate the alliance base and blow it up. Fortunately, a droid helps you free yourself and you will take on the task of escaping from this complex called the Coil. Defeat the few enemies blocking your way, go up to the space station, eliminate the guard who opposes you and join the master to prevent a disaster. 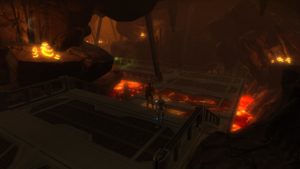 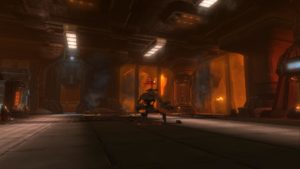 You will also find in the complex some consoles whose activation will inform you about the history of this torturer.

First Hk-55 wakes up, held back by magnetic links. The first conversation takes place with a ZO-OM droid, which will set you free. This droid will play the role of your companions who are unusable. You will notice that it has a small flaw since it loses its memory regularly during the chapter. Besides this problem, I found that his dialogues are quickly annoying, in particular the sentences that he utters outside of cinematics.

Once free you will then receive a call from your torturer: The Shroud. He explains to you that his plan is to destroy the alliance and we understand that his target is the foreigner. HK is therefore embarking on a project ofevasion of the complex The coil where he was held. This complex is the lair of the Shroud which lies at the bottom of the ocean and has several tunnels dug flush with bubbling lava plates. Some enemies will try to prevent you from passing but they will not pose much difficulty.

You will then find yourself in a museum room where you will have the opportunity to discuss with copies of 2VR8 and HK-47. Made with the aim of learning more about the alien, these copies will be destroyed following the intervention of the battle droid X-TRO. Eliminate him and continue on your way. You will then dive into the water to gain another part of the complex. But beware, the ocean floor is monitored and you will find a few Mandalorians in wetsuits. 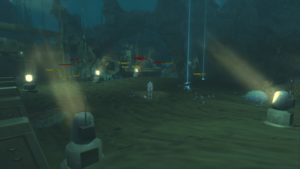 You will see through various cutscenes as the Shroud continues to progress towards its objective as you escape. Your progress in the second complex will be faster. An elevator will take the HK-55, ZO-OM duo to an orbiting asteroid. Eliminate the few Mandalorians who stand in your way and join a space shuttle to escape. 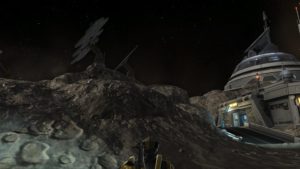 Obviously, you are not yet at the end of your sentences. The shuttle you are about to fly is guarded. HK-55, a reprogrammed copy in the service of the Shroud, comes between you and your lens. He teaches you that in truth ZO-OM is the Shroud. Her memory having been affected, she sides with you and you can then fight this copy. Take out the mines he sends and other area damage and you'll have no trouble defeating him. You can then join the alliance base and interrupt the activities of the agent sent to destroy it.

The latter then confirms the words of the deleted copy. The choices made during the chapter then led us to several possibilities. It then becomes possible to proceed with the elimination of the agent and to recruit ZO-OM.

Your turn, pile of meat!


Do you want to be up to date and know all the tricks for your video games? In gamesmanagers.com we enjoy playing as much as you do and for that reason we offer you the best tricks, secrets or tips for you to play non-stop. We offer you quality content and always updated to keep you up to date. That's why, in our website, you will find not only videogame guides but also tricks, secrets and thousands of tips so you can play to the limit. Are you ready to get it? Enter now and enjoy your videogame!
SWTOR - The Datacrons of Corellia (Empire) ❯