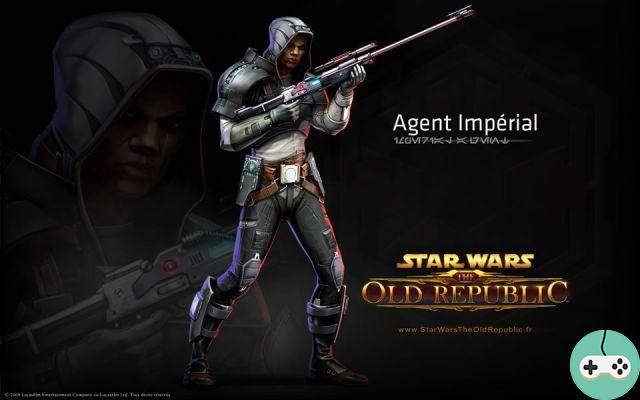 Please note, this article contains the elements of the Imperial Agent Class history quest. It therefore contains revelations. Please go out if you don't want to know them.

Peace has been declared between the great powers of the galaxy, but that does not prevent their secret services from being very active in the galaxy. An agent of the Empire, fresh out of his academy, is sent to Nal Hutta for the mission which must serve as his examination. He must pretend to be the famous pirate Red Saber and convince the Hutt Nem'ro to lean in favor of the Empire. Big surprise, his supervisor is Cerberus himself, the head of the Imperial Secret Service. He must therefore act with precision. Despite some unforeseen elements, the mission is successful. One of these contingencies is the rattataki Kaliyo Djannis who manages to pierce her cover. But she seems more interested in a collaboration than a confrontation. And Cerbère is to study his file.

In the capital Dromund Kaas, the agent and his new partner therefore officially join the Secret Service. They find Cerbère, as well as Observer 2 (Shara Jenn) who must be their liaison agent. And above all, they meet Dark Jadus, a member of the Dark Council responsible for the Secret Service Sphere, who has an unexplained interest in this new recruit. He demands that he take care of certain targets. Impossible to refuse. And meanwhile, the troops of a terrorist called the Eagle manage to plant a bomb aboard the Dominator, Darth Jadus' cruiser. The Sith is killed, along with all the dignitaries and officials around him. By virtue of his success and his patronage, the young agent was promoted to the rank of operator, the elite of the Secret Service field agents. His civil record is erased so as not to be hacked. Codename Operator 9 is sent to hunt down the Eagle and avenge Darth Jadus. 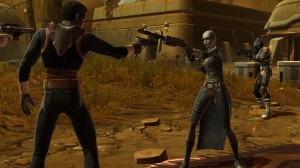 Darth Zhorrid, daughter and heiress of Darth Jadus, approves the choice of the one who must avenge his father. But she appears much less stable than him, and in a less good position politically. A track is declared on Balmorra, planet captured during the last war but where local resistance remains very strong. An element having infiltrated it discovered that one of their officers was associated with the Eagle. To reach and eliminate it, it is necessary to go up the hierarchy of this resistance to the officers linked to the Republic. And thus play the double agents vis-à-vis certain imperial possessions.

On Nar Shaddaa, the Eagle's agents have commissioned a company on the edge of legality to provide a powerful incentive. This does not have to be developed. Operator 9 must work with Observer X, a former agent deemed unstable and locked in a Moon Hutt prison. This suggests that the agent has certain implants placed to thwart certain securities. But he also takes the opportunity to prepare his escape. Stopping him before he fled to the spaceport then becomes part of the mission. And then there's Darth Zhorrid, who doesn't hesitate to divert certain resources. As if to send for a former relative of his father to extract secrets that would make his political position less disastrous. 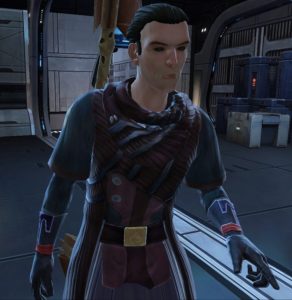 After Observer 2 intercepts a communication talking about Eradicator satellites, Operator 9 lands on Tatooine in search of the Phantom Cell, the training center for the Eagle's assassins. In particular, they have equipment that allows them to take on the appearance of other people. One of their recruits decided it was best to leave them and warn the Empire. But here she is now being hunted down by her former allies. And if the others in front can imitate his appearance ... Who to trust?

The Imperial Secret Service has no agent in Alderaan. For certain information, it will be necessary to go through Vector Hyllus of the Diplomatic Service. But his interest in kiliks has made him one of their affiliates and his answers are not always very clear. It turns out that here, one of the rulers of a noble house allied with the Empire did business with the Eagle Banker knowingly. Vector offers its new kilik allies to replace them. But there is a price to be paid in getting rid of one alliance and entering into another. As for the diplomat, his special talents earned him a more permanent assignment to the Operator 9 team. Now is the time to go face the Eagle on Nal Hutta. But also to discover that he had an associate who manipulated him in the shadows.

While going up his communications, Observer 2 and the agent discover in the system Artus the Dominator and a Dark Jadus still alive. He planned to return to seize a dominant position within the Black Council, and proposed to Operator 9 to become his personal agent. Given all the deaths his Eradicator satellites would cause, is it possible to obey him? 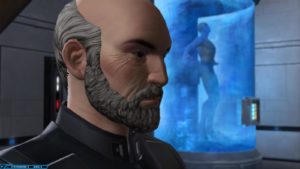 The Eradicator crisis has led to some promotions. Cerbère became Minister of Secret Services. Operator 2 replaced him at his post. She entrusts Operator 9 with a new mission, an infiltration of a group of the SIS commanded by Ardun Kothe. But things are not going as planned. The Republican spy activates a secret programming code that forces the Imperial to obey him and not warn his superiors. He therefore finds himself on Taris, playing the triple agents by tracking down a Jedi gone mad and wanting to create an army of rakghoules to conquer the planet. Fortunately, he can count on Doctor Eckard Lokin, a former Imperial Secret Service repairman for that, carrying out some research on the rakghoul virus to the point of inoculating it.

Observer 9 begins to have visions of Observer X, but these help him understand what is going on. He infiltrates the Secret Service headquarters on Dromund Kaas to study his case. He reads the confirmation that it is indeed his superiors who are responsible for his conditioning. The only way to break free is to self-inflict a new dose of the serum and choose a new personalized password. For that, direction Quesh where the necessary chemicals are collected. But the mixture needs a time of maturation before being perfectly effective. And the SIS contacts him beforehand for a new mission.

On Hoth, Operator 9 must find a certain shuttle abandoned for several years. He begins to want to join the expedition of an admiral going in the same direction, but this one wants to set up on his own. He wants everything for himself, and to eliminate those around him who are not personally loyal to him. Fortunately for the agent, the chiss on the planet have other plans in mind and want to prevent this betrayal by their allies. Sadly, their human officer Raina Temple is needed to go to the end and she sees too much of it. It must be incorporated, it still has something to be useful. And with the data recovered, Ardun Kothe can access an arsenal on Quesh created by Doctor Nasan Godera at the time when he was creating powerful weapons for the Research & Development division of the Republic Army. Operator 9 is finally ready to eliminate his forced conditioning. But the agent of the SIS Chasseur betrays in his turn, and makes proceed to a bombardment of the zone by the imperial ones. 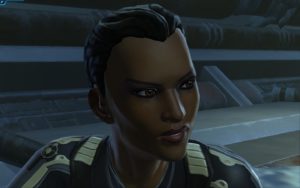 Hunter being identified as participating in creating several sources of conflict between the Republic and the Empire, he must be eliminated. The Minister of Secret Services admits knowing that Operator 9 has freed himself from his conditioning but he did not agree with the orders of the Black Council and he will not report this information. He personally instructs the agent to identify the group to which Hunter belongs and to eliminate as many of its members as possible. The first track leads to Belsavis, where the opponent tries to erase old data. They are actually former members of the Star Cabal, the organization to which Hunter belongs. Frightened by the idea of ​​being betrayed by their own and eliminated, they reveal several pieces of information about their foundation after the Great Hyperspace War. They even let the droid in charge of their security, SCORPIO, be taken away and reprogrammed.

Observer 3, the new HQ liaison, announces that several cross-checks have been made on recent Star Cabal actions. Unfortunately, the affected recording contained a virus that left many of their top modified analysts unconscious, including Cerbère. They are therefore alone for the rest of this mission. But they have a new lead on the neutral world of Voss. Operator 9 discovered there the training center for their agents, like Hunter. They were using the planet to develop resistance to the Force. And were hiding behind a local prophecy to prevent locals from investigating the area. This will no longer be the case after the Imperial Agent takes care of both. 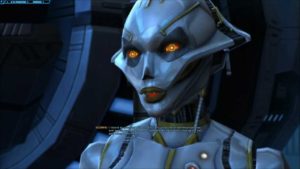 But the Stellar Caballe have allies in the upper imperial circles, and they are plotting to increase the distrust of members of the Dark Council towards the Secret Service of their recent rival Dark Jadus. The ax falls, and there they are dissolved. Field agents, including operators, are incorporated into the army. Operator 9 finds himself under the orders of the Sith warrior Kaleesh Razer with a lieutenant rank. And Kaliyo is arrested for her past acts. Without her, the group must go to Corellia, on the front line of the war between Empire and Republic. Which doesn't prevent someone from the former Secret Service from keeping in touch and warning him that Hunter is also on the planet. But difficult to face it in this configuration. The death of Lord Razer at the hands of a Jedi knight creates an opportunity. Operator 9 organizes a staging to pass himself off as dead. He can thus find his informants, the former ministers and Cerberus, who in the process intercepted Kaliyo and saved her from prison. The reunited team can thus infiltrate the main base of the Caballe Stellaire, identify its leaders, neutralize its main agent and recover the secrets of their library. The enemy is finally neutralized.

His Sith superior dead, his Secret Service dissolved, the agent known as Operator 9 is in a unique situation. It is up to him to decide what he can do. He can strengthen his ties with the imperial organization. Or, if he has had enough of this life, he can get out of it and only intervene as a mercenary. But beware, if someone in high places were to study the actions in which his hand was involved, he would notice to be dealing with an indispensable champion in the reformation of the Secret Service.

add a comment of SWTOR - Imperial Agent: Walk in the Shadows