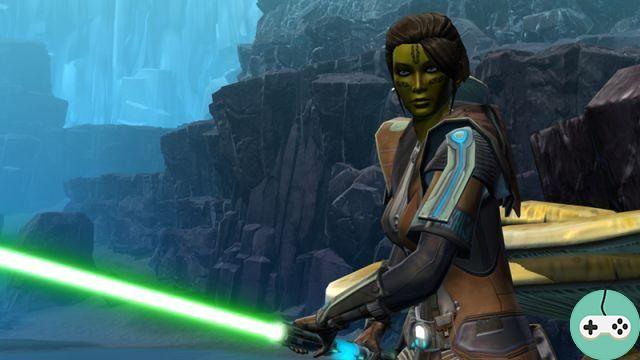 Natives of Mirial, a desert and frozen planet located halfway between Yavin and Almania along the Hydian Way, the Mirialans, close-humans with green skin and azure eyes, are renowned for their deep religious beliefs and are among the few peoples in the galaxy to have a close relationship with the Force and to have developed their own understanding of it; and although the latter is much less extensive than that of the Jedi, it nevertheless comes very close. They are also so close, that for several centuries, the Jedi Order always counted within it at least one representative of Mirial and, often, the tradition wanted that its Master is also a Mirialan. In this way, the Mirialan Jedi could open themselves to the path of the Jedi without denying their heritage, the history of their world or their native language, Mirial.

The green-skinned Mirialans are one of the wisest and most mystical species in the galaxy and can grow into powerful Jedi Mages. They are recognized by the symbolic tattoos they wear on the face and by their natural agility. They are also respected for their patience and insight. The Mirialan Jedi Mages confidently lead the Republic forces into battle and summon the most powerful energies of the Force to defeat their enemies.

Like the Jedi, the Mirialans see an individual's actions as helping to influence their destiny. However, in their view, these choices are not ordinary or trivial. They are the result of a long initiatory journey intended to highlight the talents and weaknesses of the person in question, but above all to reveal their true personality and their strength of character. More concretely, these tests allow, according to the Mirialans, to determine which roles or not the initiate will have to play precisely in future events. Tradition also has it that each Mirialan wears a tattoo symbolizing the trials they have successfully passed and their destiny. Most of the time, Mirialans wear these tattoos prominently on their face or hands, but they occasionally get tattoos on their arms or legs.

Luminara Unduli was born on the planet Mirial, cradle of the Mirialans. His might in the Force was detected from an early age, as Jedi tradition dictates. She was brought to Coruscant to learn the difficult art of becoming a Jedi. During her training, she never ceased to improve herself in her physical possibilities. She trained, constantly, to redouble her suppleness and flexibility in her movements. This long practice allowed him to practice and perform movements that are totally foreign to Humans, even Jedi. Her flexibility and dexterity make her a living weapon when wielding a lightsaber because she can easily twist to escape lasers.

Her skill rivals her grace and beauty. Indeed, her triangular face, her blue eyes, as deep as oceans, the green-matte color of her skin make her a superb creature as dangerous as it is beautiful. The diamond-shaped tattoos that she wears, below her mouth, indicate her specialty, namely, the physical disciplines.

Still wearing her gown, her headdress actually hides extrasensory organs which are sensitive to drought but which are formidably effective in combat as they allow Luminara to better visualize what is happening around her. This faculty makes her even more dangerous because she sees what is going on behind or on her sides.

Very early on, she showed great wisdom and sense of logic which made her an important element with the Jedi Council or even the Chancellery. She was able to give good advice to the Council and the Supreme Chancellor in troubled times, at the dawn of the emergence of the Empire.

In the years leading up to the Battle of Naboo, Luminara assisted Qui-Gon-Jinn and his apprentice, Obi-Wan Kenobi, in the hunt for a dangerous criminal, Arwen Cohl, a native of the home planet of Luminara. His help was once again invaluable to the Jedi Order.

After this period, she decided to take under her wing a young woman named Barriss Offee and teach her Jedi techniques and philosophy. The two women hit it off right away and developed a fusing relationship that materialized as almost complete harmony during the battles they fought together. The two women reacted at the same time and performed the same actions at the same time. This faculty was useful to them many times, in very perilous situations.

She soon entered the Jedi Council and was able to make a contribution to the maintenance of the Jedi Order and the Republic in the face of the separatist crisis which was in full swing at the same time.

She then joined the diplomatic mission launched on Ansion and led by Obi-Wan Kenobi in order to maintain peace between the inhabitants of the cities of the planet and the nomads roaming the plains of this one. The mission was a success and formed a lasting alliance between the two "peoples" of the planet, preventing them from splitting with the Republic.

However, the Jedi had not yet triumphed over the Separatists, and she herself had yet to participate in a real clash between the Jedi and the Separatists, which soon followed. Indeed, she was one of three hundred Jedi who were sent to Geonosis to rescue the Jedi Obi-Wan Kenobi and Anakin Skywalker and the Senator of Naboo, Padmé Amidala. She decided to bring with her her padawan, who had almost become a Jedi, to help her in her task. Once disembarked and discovered, the two women threw themselves headlong into the battle. They had never fought with such harmony. One seemed to be the blows directed at the other, they were destroying one by one the battle droids that stood in their way. However, their actions were not enough to stem and push back the droid army that made up for its losses, as many of the Jedi perished.

Surrounded on all sides by the separatist army, the Jedi, of which Luminara and Barriss were still part, owed their salvation only to the intervention of the clone army, led by Master Yoda. A furious battle ensued in which Luminara and Barriss rushed to support the Republican troops. It was a victory for the Jedi but also, a great void in the Force as many were now dead.

After this battle, Luminara and her padawan traveled to Ilum so that Undili could knight Offee and make her a Knight. This ceremony, which took place in the greatest calm, was however altered by the intrusion of droid-chameleons laying mines in the Temple on the orders of Count Dooku. It was Luminara who sensed the presence of the droids and the two Jedi set out to find them. They found them hanging from the ceiling and began to destroy them. However, the damage was already done, the ceiling of the cave, where the Temple was located, had been completely undermined and the latter did not fail to collapse when the explosive charges went into action.

Though threatened by the vault's collapse, Luminara fell into a Jedi trance of relaxation and appealed for help to any Jedi sailing in the vicinity, soon aided by Barriss Offee. Master Yoda, who was aboard the royal nave of Senator Amidala, received this call and asked the Senator to go urgently to Ilum. He arrived in time and freed the Jedi from their rock trap. Thus, Luminara was once again able to fight the separatist threat throughout the Clone Wars. 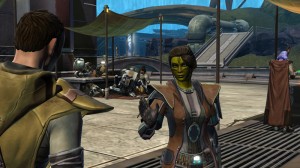 
Do you want to be up to date and know all the tricks for your video games? In gamesmanagers.com we enjoy playing as much as you do and for that reason we offer you the best tricks, secrets or tips for you to play non-stop. We offer you quality content and always updated to keep you up to date. That's why, in our website, you will find not only videogame guides but also tricks, secrets and thousands of tips so you can play to the limit. Are you ready to get it? Enter now and enjoy your videogame!
FFXIV - Memoirs of the Seventh Plague III - After the Battle ❯