SWTOR - On the Road to KotFE: The Imperial Agent

Be careful, the following contains many revelations about the history of the Imperial Agent. Don't read if you don't want to be spoiled.

Enemies in the shadows 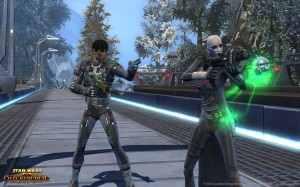 What you are about to read is an excerpt from the official Star Wars ™: The Old Republic ™ Encyclopedia. This is a summary of the 3 acts in the history of the Imperial Agent class. While we do our best to avoid them, this snippet does contain spoilers. So read at your own risk ...

After shining in his initial training, a newly recruited Imperial Agent is sent to the planet Hutta to manipulate a powerful Hutt crime lord named Suudaa Nem'ro into supporting the Empire. After infiltrating Nem'ro's organization, the Agent is dispatched to complete a number of missions against the Hutt's great rival, Fa'athra, in order to gain his trust. The Agent manages to convince Nem'ro little by little that the Republic is harming his interests.

Despite the hardships caused by suspicious rivals and ruthless enemies, the Agent succeeds in persuading Nem'ro to support the Empire. After returning to the imperial capital Dromund Kaas, the Agent's impressive work is noticed by a member of the Dark Council: Darth Jadus.

Chapter 1: Rise of the Eagle

By order of the Sith Lord Darth Jadus, the Agent investigates and sabotages the missions of the terrorist network that has infiltrated Dromund Kaas. The Agent manages to stop the terrorists before they spread chaos and destruction in the Imperial Capital, but their bitter enemies succeed in destroying another target: an Imperial Battleship carrying a large delegation of high Imperial dignitaries, including Dark. Jadus himself. A pre-recorded message from the leader of the terrorists, the Eagle, is the only clue that exists on the organization's motives and their future plans. 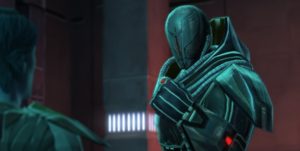 In response to this crisis, Agent is promoted to Operator 9 and sets out to search for terrorists across the galaxy, hoping to dismantle this network before it strikes again. As this fearless Agent infiltrates and sabotages one terrorist cell after another, the terrorists' ultimate weapon is unveiled: the Eradicators, satellite cannons launched into orbit over numerous imperial planets and capable of killing millions of people. . Although the Agent manages to track down the Eagle and defeat him, Operator 9 must follow one final clue to reach the secret base of the terrorist's factious ally: Darth Jadus.

Jadus had underestimated Operator 9, thinking the Agent was too inexperienced to derail his plans. It is true that the Agent has little chance of defeating such a powerful Sith Lord in direct combat. Operator 9 is faced with a dilemma: follow Darth Jadus, sow destruction in the Empire by his side and then gain power; or risk everything to try to end his plans, or at least minimize the damage before reinforcements arrive and neutralize Jadus once and for all.

Chapter 2: Trust No One

Following the Machiavellian plots of Dark Jadus, Operator 9 is given a new mission: to infiltrate the Strategic Information Service (SIS) of the Republic. The Secret Service believes that an important SIS agent, Ardun Kothe, is planning a big deal. Operator 9 masquerades as a deserter and tries to gain Kothe's trust. But the Republic's spy master is not taking any chances: Kothe has been informed of a code word capable of activating a brainwashing at Operator 9 by a secret Imperial method, which forces the Agent to participate in the conspiracy of Kothe against the Empire.

Operator 9 cooperates with Kothe and performs tasks for the SIS agent, along with another Republic spy nicknamed "Hunter". The Trapped Agent fails to find out how Kothe found out about the brainwashing, but nonetheless manages to break free from the mental hold. Finally free, Agent intercepts Kothe just before he gets his hands on his ultimate weapon: a secret cache of stealth missiles, known as Shadow Arsenal, capable of destroying any Imperial target. without being detected. Operator 9 defeats Kothe, but his right-hand man, Hunter, turns out to be an independent agent working for a third party; probably the same group that mentioned Operator 9 brainwashing at SIS. Unfortunately, Hunter escapes before being questioned about his real employers or their mysterious plans.

With the enigmatic Hunter as their only lead, Operator 9 and the Imperial Secret Service set out to follow the conspirator's moves as best they can. As the clues and puzzle pieces add up, it becomes clear that it has been decades, if not centuries, that Hunter's accomplices have been manipulating galactic events. This dark group calls itself the Star Cabal, and its ultimate goal is to eradicate both the Jedi and the Sith. To do this, they push the Republic and the Empire to destroy each other. 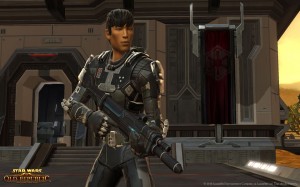 Operator 9 finally manages, after many difficulties and heavy sacrifices, to locate the secret headquarters of the Star Cabal, and launches a full-scale attack there. Hunter challenges the still steadfast Agent in a final battle that will determine who will be the custodian of all Cabal secrets, but Operator 9 wins. Now in possession of an exhaustive list of all the conspirators and their activities, the Agent must make a decision. He must decide whether the power conferred by this list should go to the Imperial Secret Service, the Dark Council, the Republic ... or no one.

Add a comment from SWTOR - On the Road to KotFE: The Imperial Agent