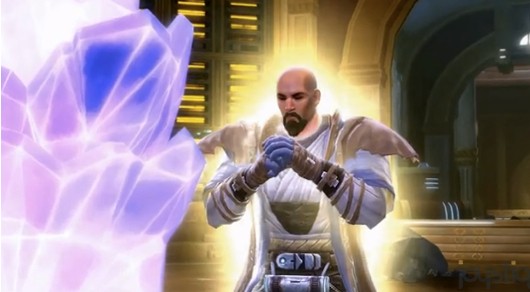 On the main stats side, the two to have on our pieces of gear are:

There are also several secondary characteristics that can be found on items that can potentially be of use to us:

The other characteristics not mentioned here are totally negligible, if not unnecessary for us as a healer.

The skills are presented here with the modifications made by a template specialized in protection. They are therefore only valid for a scholar specializing in care. I am only citing the skills that are involved in our role as healer, you will have the opportunity to experience the dps skills in play, and I am not going to confuse this guide with that.

And here we go, COME ON BABY! Well ! first of all logical that we go and take all the additional spells (suicidal band!) At first glance, minimal changes to the template itself. As always heal stronger (Clairvoyance + Wisdom + Will of the Jedi), Our Hello not having been nerfed, why would we refrain from making it even more "AWESOME"? So we will look for Psychic Invasion (It is true that a yellow circle on the ground is psychologically striking, to the point that no one wants to get into it!), And to continue the momentum of the "strong Healer", we take the influx? Well, you need criticism! And precisely we have 2 talents for that: Serenity which in addition reduces the damage that we take in the head (Hum), and Penetrating Light.

Because'Force armor is "AWESOME", why deprive yourself of the up? We will increase its absorption rate thanks to Telekinetic Defense and allow ourselves to spam on the raid without spending too much money on resources (Preservation).

Despite the changes made to Assignment, New youth will always be at the heart of our gameplay and therefore all the improvements concerning it are to be taken (Cession as well as Shelters of Force)
Let's get to the heart of the nerve! to know Healing trance Firstly. Although his role will no longer be too much of a source of resources (see Gameplay section), the Shine talent is still valid. But its redesign (namely that we will still lose our health when using it) makes it less interesting. Since we will not consume it as soon as it is used, I decided to put only one point in it. And we will partially counter the negative effect remaining with Vaillance, so as not to embarrass our raid too much with each use (namely that the talent was up by 2% loss reduced, it went to 4% ).

Suddenly we will have to pay all the more attention to our regen. The redesign of Cession helps us a little from this point of view, and Vigor + Mental Longevity are therefore two talents that should not be forgotten.
Do we have any points left? Thin, I forgot Wound healing! which is always essential. We still have points left, it's "AWESOME", so let's reduce the recoil of our spells with Prévoyance, and Délivrance being a Heal AWESOME, we will make him caster faster (to prevent the little comrades from dying during the casting anyway) thanks to Immutable Force

Other variations exist also based on 32/7/2. For example, if you have a fairly low critical rate, it might be worth reverting to 2/2 on Resplendent. In this case, you might as well take a point of soothed Pain. Giving us that kind of template. The point can also be taken from Prévoyance. But you should expect to have regular damage to your head during operation, and taking 25% of recoil is something not negligible. 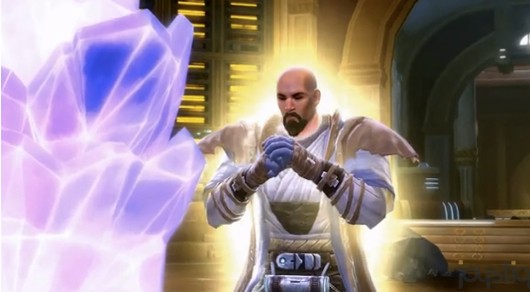 Overall, the Scholar as a healer is quite similar in playing him to the “classic” healer in a mmorpg. You have a big pool of resources and you have to save it, because when you run dry, it's pretty hard to get back into the race. Your logic will therefore generally be to heal just enough, at the most leisurely pace possible to save your Force points over the duration of the fight. You will therefore seek to make the best use of the mechanisms that improve your care or allow you to save your resources.

How to play effectively with these few mechanisms? First of all, it's important to note that most systems that save a lot of resources are at the end of the tree. Choosing to take the Mental Longevity talent to have a little resource to heal during the progression phase, even if it means unlocking the skills of the heal branch later is also quite valid. In short, up to a fairly high level, your challenge will be not to run dry during long enough encounters, for that you will have to learn to be thrifty, which will be a good habit to take. Heal only what is necessary, do not abuse unnecessary heals, the important thing is to last the duration.Once high level, use all the mechanisms intelligently to both increase your heal provided and save your money as much as possible. precious Strength points. Overall, you will tend to quietly maintain your group based on the New Youth + Deliverance economy combo and only take out the heavy artillery when it starts to smell scorched.

The advantage, compared to other healer classes, is that if it smells like scorch over a short period of time, you will have reserve underfoot to send a big burst, the disadvantage is that you will have to hard to get back into the race afterwards. Noble Sacrifice hit regeneration is tense, especially in a group of 4 players where you don't really have another healer to help you quickly recover the life points sacrificed. In Operation, depending on the battles, you can hope with some respite to pull yourself up like a bag with the help of a colleague who has an easier time staying in the race to avoid dying at the next AoE.

Remember to take advantage of the Assignment bonuses, and not to miss your free Noble Sacrifice thanks to Resplendence, these spells obtained in your talent tree are also must-have to use regularly since they are not very expensive for good effective heals. Otherwise, play according to the situation, always with a view to saving money, and everything should be fine.
Force Armor is a very powerful spell that can make a difference, be careful though, as long as it hasn't been upgraded by talents, it's a resource pit, don't fall for it too much. ! 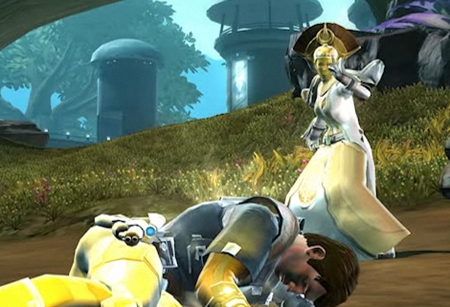 Before actually broaching the subject, what directly increases our care?

Each healing spell is governed by a mathematical function (I'll spare you the calculations!) Which depends alone and solely on our healing bonus (which I will call BS throughout the article by laziness). So to "heal" harder, we will try to increase this statistic as much as possible. However you will be able to look to the right and to the left! No part has any healing bonus! How to do ?

There are three stats that increase our BS: Willingness, The power, and The Power of the Force

Power of force> Power> Will

The other statistic that will greatly interest us is the critic. Beyond the fact that critical care is stronger care. A critical care on Healing Trance / Innervation. It is a noble free sacrifice (therefore a direct entry of force)

There are two stats that increase our review: Willingness et Critics Index

But, What about the other statistics? There is also :

As you may have noticed there are two types of statistics, general and secondary. A general statistic is a statistic either not modifiable directly (like the power of the force), or which is systematically found on all the objects (like the will). For people coming from wow, we can think of Will as Intelligence, and Power of force as Power of spells.

So according to our tree. First of all, we want to have a good entry of force to hold out during fights. And heal harder. And that's good our trance of care / Critical Innervation really not bad!

So we are going to have something of the order of

Cap? Quezako? Without really giving any figures. This is the value to come closest to a Healing / Innervating Trance Crit every time you cast it (So to ensure that you get a noble free sacrifice). Personally I place this value around 25/30% then it is according to the comfort of each one. You are free to climb more and it is not stupid, sometimes you will be led to launch your healing trance without the Cession buff. Having a reviewer on these occasions is welcome!

We also know that the power of force and willpower are general statistics (so we will not be concerned much in an optimization mechanic). That we do a lot of criticism. However, casting too quickly and having a more greedy cycle can be detrimental to us given our weak regen with empty force.

In general for a Power / influx Scholar (as its name suggests) we will have an order of priority of the statistics in this figure.

Before tackling this particular optimization, it is imperative to read the gameplay differences between Erudite Alacrity and Scholar Power / influx. Otherwise you risk having surprises.

We will therefore increase the alacrity to cast faster, and the power to heal harder.

We will therefore have:

And the Stims / Dopants in all this?

Regarding the stims no surprise since we will only use the stim Will / Power. For dopants, the one before Power Force + Damage reduced seems to be the most suitable!

Thanks to the work of Tektonis, take advantage of a printable version of the guide in paper format of this guide to read in the subway, on a bench, in the toilets… To print in booklet / brochure format to make a pretty mini guide? Please note, however, that this paper version is not updated and may vary slightly from the online version which remains the most recent.