SWTOR - Sith of yesterday and tomorrow 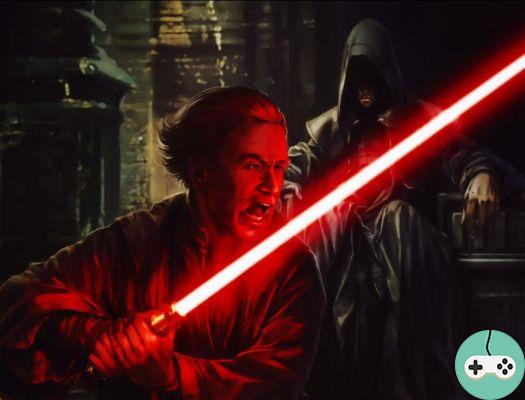 Regularly, Lucasfilm has written books supposed to enrich the background of the Star Wars universe. Half chronologies and half encyclopedias, their primary goal was to make a link between the different eras of the Extended Universe and to smooth out the contradictions. Sometimes by adding some elements which explain these differences: for example, because the same name appears at two different times with opposite attitudes, the authors added some to properly situate two well separated characters.

From there, material was added at various times. For example, it is through these books that the origins of the Jedi and the Sith were defined. Taken up later by other works of the Extended Universe now renamed Legend (including TOR, isn't it the consular?). When available, these additions are based on the preparatory work of Georges Lucas (in particular the period of Dark Ruin, to which I will come back later). Very few of these books have been translated and published in Spain, to find out their content, you have to be content with online encyclopedias of fans (Star Wars Universe, Holonet, Wookieepedia ...).

Of those that have passed, The Jedi Handbook has been one of Kiràly's main sources during his series of articles on Jedi Formation. In its counterpart, The Book of the Sith, a text recounts the beginnings of the reign of the Jedi exiles who seized power in the Sith Empire. A founding act in the EU regarding the Sith Order. In this text, it is said that the new chiefs intend to slip into local traditions with minimum waves. For they were too weak to embark on a showdown, hence the title of Dark Lord of the Sith rather than seeking to restore the old kingship. It is therefore more than likely that Marka Ragnoss, Naga Sadow or even Vitiate were brought up with the memory of King Adas. Yet with other sources taking a more present view (by convention the present in Star Wars is the time of Luke Skywalker, after the Trilogy), no mention of the Sith race. But the Legions of Lettow, black Jedi who sparked one of the Order's greatest internal wars and whose legacy the exiles claimed when it was their turn, hold a prominent place in the historical figures of the Sith Order. What a difference in look, isn't it? Which brings me to my problem: What is the relationship of the Empire of The Old Republic with all other incarnations of the Sith? 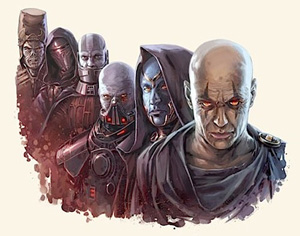 First of all, let us recall what is the history of the Sith. We consider that the founding element of the Sith Order is the arrival on Korriban of the exiles defeated during the Second Great Jedi Schism (the First had seen the formation of the Legions The authorities of the day were wizards of the Dark Side, and as they mastered the Force better than they did, they replaced them and thus ruled for several centuries, taking the Sith name from their slaves. This Empire will eventually collapse when he faced the Republic in the Great Hyperspace War, about five thousand years before the films, and will be divided into three parts.The Lost Tribe is the crew of a cruiser that crashed on a distant planet and will stay away from it all until forty years after the Battle of Endor (Episode VI). Ignored by the other branches, she is too recent in terms of interactions with the rest of the universe so that we can generalize about its behavior. The second to claim this heritage is gathered around the Emperor Vitiate and his Dark Council, they are the Sith of The Old Republic. The third group starts from Naga Sadow, legitimate leader of the Empire during the Hyperspace War, and his apprentice Freedon Nadd, a former Jedi. The latter's ghost trained other apprentices, and the Black Jedi Exar Kun and Ulic Qel-Droma received the dubbing of the former Dark Lords of the Empire. In turn, they lost the Great Sith War against the Republic. When Emperor Vitiate sank the Jedi Revan and Malak into the Dark Side, they faded their memory to free themselves from his slavery. And did not tell anyone about his intervention. For all their followers and enemies, the origin of their knowledge of the Sith came from Kun and Quel-Droma, from which they also recovered some survivors. The two groups are often united under the name of the Third Great Schism. The Sith Triumvirate will emerge from their organization at the end of the Jedi Civil War, but in the end only a few isolated individuals will continue to propagate their version of their teachings. It is in these centuries that the Empire of Vitiate will return, and that takes place TOR.

Spoil now, the Sith will once again lose this war since in the future there will no longer be an Empire and the Sith will have to find a new origin. Unlike the Republic and the Jedi. For those who would be disappointed, remember that the important thing is not the destination but a good trip. Two thousand years before the films, the Jedi master Phanius will leave the Order (the first of the Lost in Episode II) to embark on various research. He will rename himself Dark Ruin and initiate the Fourth Great Schism. Throughout the millennium, the New Sith Wars will alternate peace and conflict, against the Republic and the Jedi and the Mandalorians. Until the Family, the Brotherhood of Darkness of Lord Kaan and finally the Rule of Two of Darth Bane which will go underground. Almost a thousand years later, it is this last trend that will appear in the films with Darth Sidious and his apprentices. After the death of the latter, there were several attempts to revive but only Darth Caedus managed to make enough history. The Lost Tribe resurfaced as the One Sith waited for the time to strike ... 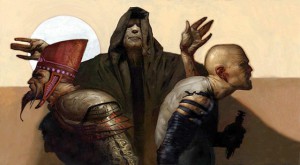 Putting the Lost Tribe aside, how do these different versions of the Sith view the Empire of TOR? For those who disappeared before he left his corner of the galaxy, it's simple they can't know of its existence. On the other side, Vitiate and his men claim to be part of the legacy of the old Empire. Using the thin ties to Darth Revan and Darth Malak, they attempt to reclaim their "successes" like the Taris bombing. For the Brotherhood of Exar Kun, Ulic Qel-Droma and their inspirer Freedon Nadd, it is less tender. The intervention of the ghosts of the ancient Sith Lords in their favor has made them direct rivals of the Emperor, and therefore their status is minimized to reduce them to mere Dark Jedi. The followers and heirs of the surviving men of Darth Revan and the Triumvirate can only follow the same comparison. We do not know if the new government of the Empire intends to change this point of view in the more or less near future. For the versions of the Sith that will follow, the question of preeminence will not arise. The teachings of those who came before them are all considered equal, regardless of their rivalry. Anyone who ever wanted to bear the Sith name is considered such. Either way, in the end, all of them failed. And as Darth Ruin and most of his followers were originally Jedi, and many others followed the same path in the millennium that followed, Jedi dominance has tinted the Sith Order. The points in common with the previous versions are as numerous as their differences, and it is impossible to define a single one of them by taking the example of only one other (I specify because I have already seen it done). Thus, references like the Legions of Lettow dominated those like King Adas. And in the end, the Empire of Vitiate and the Dark Council is nothing more than one of the many facets of the Sith.

Add a comment from SWTOR - Sith of yesterday and tomorrow