SWTOR - Summary: the equipment at 50 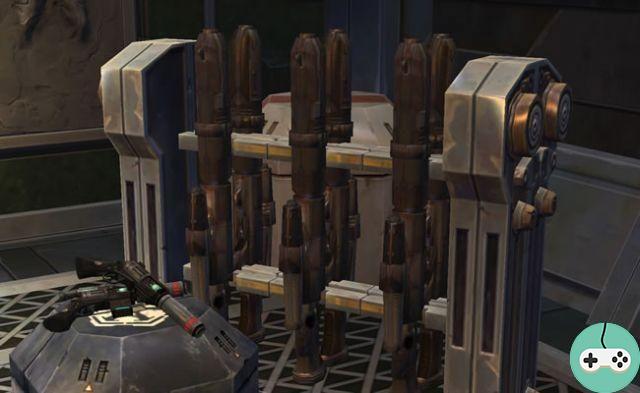 This article is the conclusion of the first two articles: Making PvE Gear at 50 and Making PvP Gear at 50. The information was provided by Owen, Thief 50, on Hrakert Rift. I completed and laid out to bring you the maximum of tips and help you equip yourself as well as possible.

For both Flashpoint Dailies, if you have a good group, your best bet is to do "The False Emperor" (on Illum) on Hard: 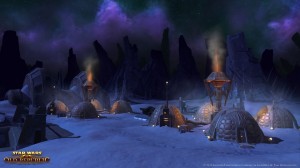 For the daily Ilum, try to do the weekly straight away if you see that it is crowded and the points are lost / regained quickly. Because that will give you three bags of champions immediately. Take advantage, Update 1.1 is coming soon and will bring major changes to Illum's PvP (such as the requirement to kill enemy players in addition to taking objectives).

Rakata Ears and Implants (Rank 3) can be purchased with Daily Distinctions obtained through daily quests on Ilum and Belsavis. Through these quests, you also get Epic 22 Armor, Mod and Sophistication every day. 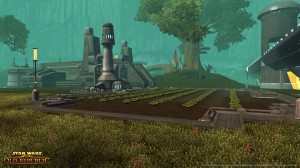 The ideal is to go in groups of 4. This allows you to go faster and gain more rewards (there are more loots in groups). Alone is long and you will not pass the heroics which are nevertheless important (heroic 4 gives 3 daily distinctions). You need 120 distinctions per object, so allow at least 5 days per item (you can make up to 27 distinctions per day).

Many players cannot pick up quests at the Mission Terminal. Here is a tip given by Yuna, Trixilixie and Naroon:
- put yourself on the left side of the terminal, then spam at the bottom left end.
- invoke a partner and spam at the same time on the terminal.

There is always a PvP merchant at the start of a war zone. You can quickly exchange some distinctions if you are ever limited.

At this time, set bonuses are not displayed when choosing from a PvP or PvE vendor. However, these sellers are linked to a class, and not to an advanced class. Thus, you will have sellers offering sets with bonuses concerning healers, tanks or dps ... or you simply will not be able to wear certain parts (ravager = heavy armor / marauder = intermediate armor).

Also do not hesitate to ask the other 50 levels who will surely know how to answer you. It would be silly to get the set bonus wrong or confuse this cute double-bladed lightsaber with a single blade.

An article is in preparation with the set bonuses

Rang 0 : Level 50 blue PvP set. This set is no longer available, the merchant was removed from the game in update 1.0.2.

Rang 1 : Centurion Set: Purchased with Centurion Honors. We get the centurion distinctions in the bags of champions (by 3).

Rang 2 : Champion Set: Purchase with Champion Distinctions or a Champion Token. We get the champion token in the champion bag (if we're lucky!) And allow a direct exchange. Champion accolades are obtained from the Battlemaster's Bag (requires Rank 60 in Bravery).

Rang 3 : beware, we will obtain more war master tokens, in the bags of the same name, but war master distinctions, always with champion distinctions requiring rank 60 in bravery.

As the equipment evolves, the set bonus remains the same, only the stats change (a lot). 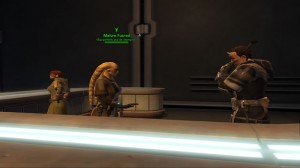 Rang 0 : epic level 50 gear. Recovered in normal level 50 instances of Ilum (quite rare) and on exterior "World Boss" such as Belsavis.

Rang 1 : Set Tionist. Trade in for Tionist Distinctions and Crystals. Crystals can be found on the bosses of hard mode instances, distinctions on the last boss. Can not be recovered anywhere.

Rang 2 : Set Columi. Can be exchanged for Columi accolades. These distinctions are earned in normal operation (Raids) or as a reward for the daily HM quest. Recover in HM on the last bosses (and some bosses, like the optional ones - with bonus quest, or some specific ones like Hk-47) or in operation.

If you want to recover a particular piece of equipment, here are the instances you need to do:

Rang 3 : Set Rakata. Can be exchanged for Rakata tokens which can be collected from certain Operation Bosses in Hard or Nightmare difficulty. 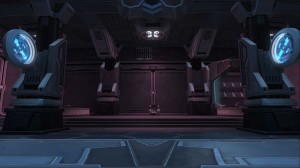 It's a surprise the first time we go on a raid. Impossible to put a traditional loot master (with an almighty ML who assigns), the items are distributed directly to the players, there is no dice roll.

We tried to change all the allocation methods but there is no other solution than to use this inflexible solution. According to the developers, this allows a fair distribution but it leaves us rather skeptical. Especially since this also concerns the non-set equipment and therefore we had players much more spoiled than others during our evenings.

However, I have been confirmed that Classic ML is available for Hard and Nightmare modes.

Epic quality recipes can be learned directly from the trainer. This allows craftsmen to create items of index 126 to 140. Items of index 140 belong to the Rakata set (rank 3 PvE set). 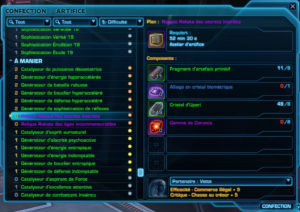 So get in touch with your guild craftsmen now, it makes some great parts to start with, especially if they are critical. In effect, this will add an upgrade slot where you can add an epic level 49-50 upgrade to it. In short, something to have imperatively to replace your ugly green parts.

Epic equipment from recipes from requires a blue item (as above on Bioemetric Crystal Alloy) which can be looted from the last boss of hard mode instances or from operating bosses.

There are also recipes that fall on the last bosses of hard mode instances that allow you to create a level 50 out-of-set item, index 126. You not only need the Biometric Crystal Alloy, but also an Auto Energy Cell. powered, epic item, which can be recovered from the last boss in hard mode (the loot is quite rare). 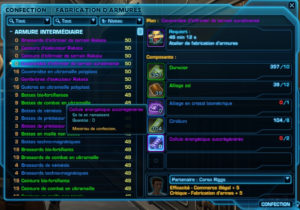 
Do you want to be up to date and know all the tricks for your video games? In gamesmanagers.com we enjoy playing as much as you do and for that reason we offer you the best tricks, secrets or tips for you to play non-stop. We offer you quality content and always updated to keep you up to date. That's why, in our website, you will find not only videogame guides but also tricks, secrets and thousands of tips so you can play to the limit. Are you ready to get it? Enter now and enjoy your videogame!
Battlefront: Aide-de-camp ❯

Add a comment from SWTOR - Summary: the equipment at 50