SWTOR - The Bestiary of Tatooine

Here are the codex - bestiary entries you'll find on Tatooine, and to say the least, there are plenty of them! Map of the planet with the place where you will find these species: 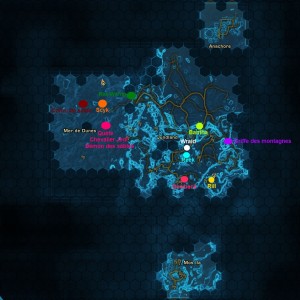 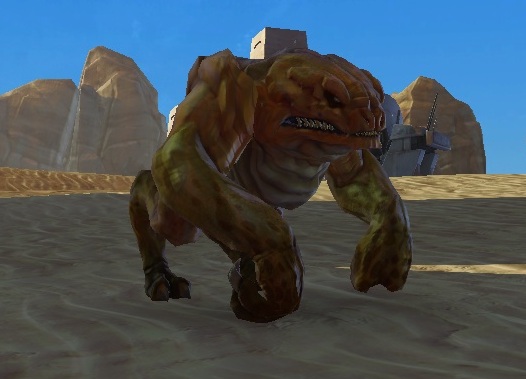 Hunting for dangerous predators is a tradition on Tatooine, and hunting down the dreaded wraid is a discipline that often separates hobbyists from experts. In addition to its incredible strength and powerful jaws, the wraid can cover large distances in record time. Its two sturdy forelegs leave distinctive traces in the sand that hunters will choose to follow or bypass.

There is a persistent rumor circulating on Tatooine about a gigantic "alpha" wraid, living in remote areas of the desert. Some hunters claim to have seen it, others claim to have seen the traces of its huge claws, before the wind swept the sand. Regardless, its existence has never been confirmed. 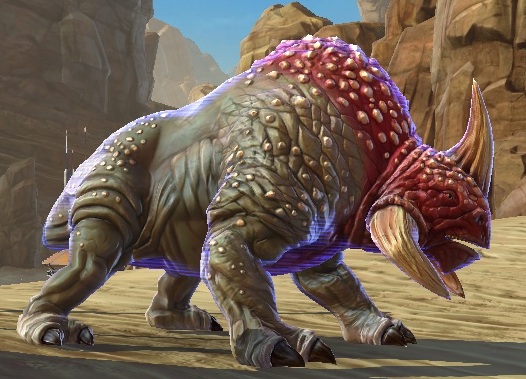 Reeks are thick-skinned horned herbivores. Originally from the planet Ylesia, they are nevertheless found throughout the galaxy, especially on Iridonia, Ithor and Tatooine. Reeks are highly coveted livestock. They also make excellent frames.

Oddly enough, the diet of reeks has a huge influence on their character. Naturally herbivorous, a reek will not hesitate to eat meat if offered to him. However, a carnivorous diet will give it dark red skin and extremely aggressive behavior. It is this phenomenon which is at the origin of the expression "enraged like a red reek" and which led to the use of reeks previously conditioned as combat animals in arenas. 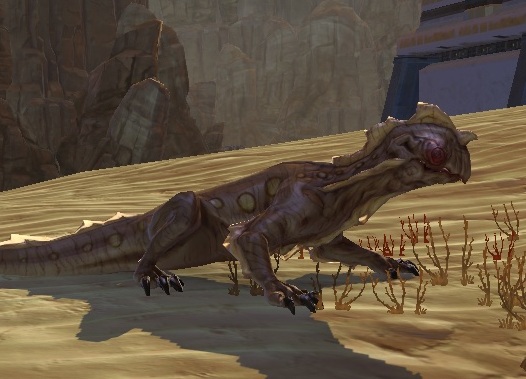 One of Tatooine's swiftest animals, the rill is a reptilian predator that feeds on rat-womps and other large mammals. Fiercely attached to its territory, a rill (with or without its young) appropriates a portion of the desert and keeps all intruders at bay. To sleep and protect themselves from the scorching heat of Tatooine, the rill burrows several meters under the sand.

It is in these underground nests that the rills lay their eggs, burying them safe from scavengers. The first task of a newly born rill is to dig to the surface, otherwise it will be abandoned by its mother and the rest of the litter. 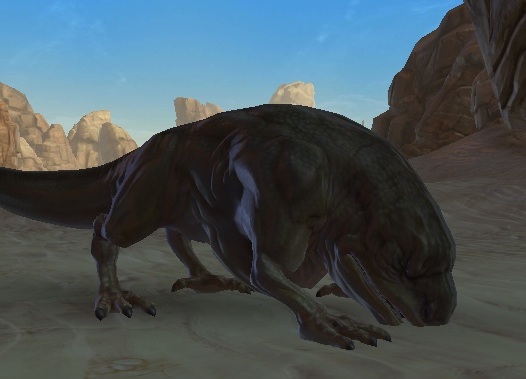 Dewbacks are omnivorous reptiles native to Tatooine, where colonies, moisture cultivators, and Sandmen use them as beasts of burden. However, they still exist in the wild in deserts and canyons. Over time, these hardy creatures exported to other planets to perform various tasks.

Centuries ago, Czerka Corporation researchers attempted to obtain "war dewbacks", larger and more aggressive than their domestic counterparts. Although the scientists succeeded, the project was abandoned when the specimens left their enclosures and ravaged the research center. 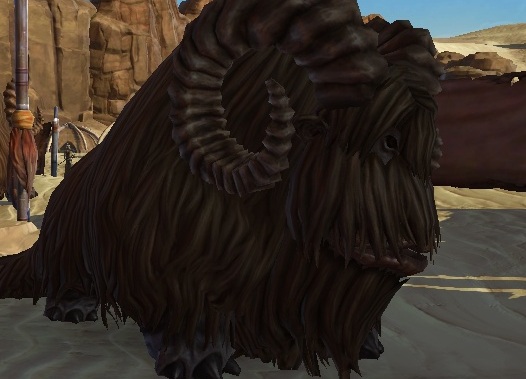 Bantha breeding has become essential for survival on Tatooine, as well as on other colonized planets. Reliable and intelligent, these animals can be herds, serve as beasts of burden and even as mounts of war. When needed, banthas are also a source of food. Their meat and milk are edible, and only one of them provides several weeks of provisions. Their skin and fur are used to produce leather and clothing, while their horns are converted into tools or jewelry.

A clumsy bounty hunter Houk was reluctantly given the nickname Boskirn the Bantha after a few contracts on Tatooine. Boskirn's career came to an abrupt end when he threatened a smuggler who had made fun of his name with his blaster. Boskirn was unfortunately not quick enough to relax. 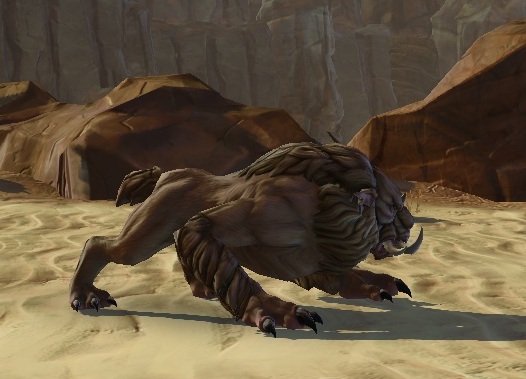 Seen on rare occasions, even on its home planet Tatooine, the Dune Claw is an omnivorous, solitary-loving reptile. A potential cousin of the wraid, the Dune Claw has hard skin covered with an armor-like shell, which makes it difficult to kill. Equipped with an imposing skull, the Dune Claw can head butts capable of shattering bones, splitting stone or warping metal.

Although it has good eyesight, Dune Claw can orient itself in the dark with echolocation and easily spot sound waves from other creatures. For this reason, the claws of the dunes instead hunt on the side of cavernous cliffs and other dark spaces entrusted to Tatooine. 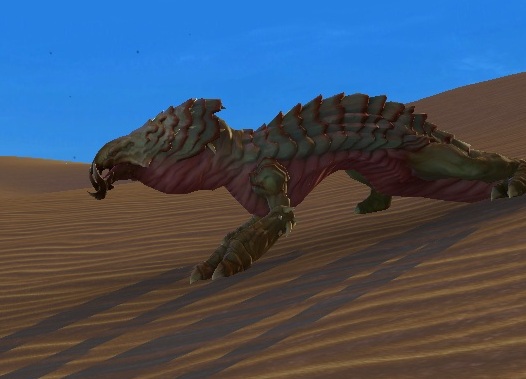 Bloodthirsty scyks live in remote areas of Tatooine, luckily far from populated areas. These animals seem to take pleasure in spreading the carnage, tearing apart their prey and reckless desert walkers. Their fangs are a prized trophy for hunters, who often bear scars in memory of their encounter with the creature.

Lord Adrazar, the Sith tamer, dreamed of having scyks as mortal servants. However, the many training sessions and other manipulations of the Force could only make them cooperate as a pack for a handful of days. The only surviving scyk (obviously the strongest), now guards his home on Dromund Kaas. 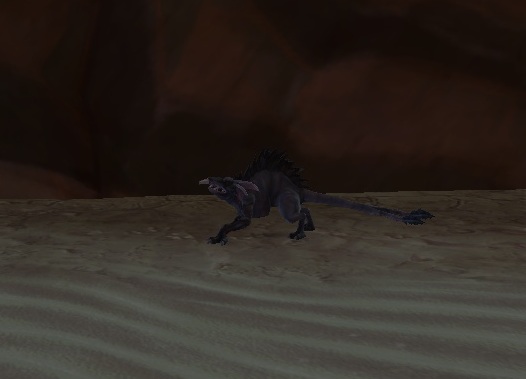 Carnivorous rodents native to Tatooine, womps rats are a threat to permanent encampments. They breed at an astonishing speed and roam as much in small urban alleys as in remote damp farms, forcing some authorities to offer a bounty to hunt these vermin. Sneaky and surly, the rat-womp loves organic waste, but will not hesitate to attack overly enterprising creatures, even alone, often transmitting them with a virulent disease.

In the desert, womps rats also attack in packs, emerging from their burrows to drown their hapless victims under a deluge of claws and teeth. A dozen womps-rats can take down an adult dewback in seconds, while a larger pack will aim for fresh Bantha meat. 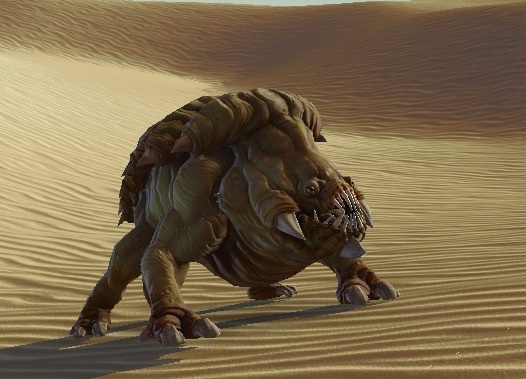 The predators of Tatooine have made a habit of leaving the sand horned alone, this scavenging reptile that does not allow itself to be eaten easily. Protected by bony ridges and able to cut into the flesh with the help of its tusks, the sand horn repels any attackers, but does not hesitate to hunt them down and finish them off either. The sand horned feeds mainly on corpses. Its powerful jaws can crush the bones of the Krayt Dragon in order to access its nutrient-rich marrow.

A detachment of the Republic's Thirty-Eighth Infantry, some of which came from Tatooine, had named their armored walker "The Sand Horn". True to its reputation, it transported soldiers to safety during the fiercest battles of the Great War. 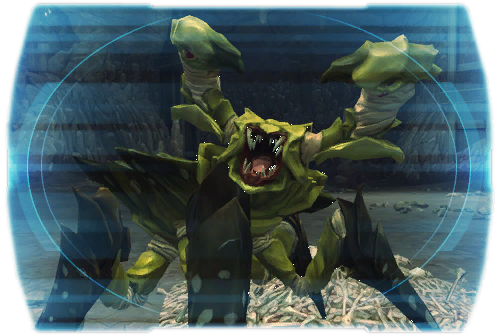 Thanks to Qootrapali for the codex entry :)

Tatooine's so-called "sand demon" is supposed to be a myth, but some implausible tales of desert nomads, as well as some blurry satellite images, cast doubt on it. According to the Jawas, the sand demon is feared by all beings on the planet, including the mighty krayt dragon of which the sand demon is the sole predator. Some stories claim that this beast is able to "swim in the sand", sliding beneath the surface as if it were water. Others argue that it can pierce rock using its hardened, talon-shaped legs.

The cave paintings of the Sandmen suggest that it devours the life essence of its victims, growing stronger and more resistant with each murder. They evoke invulnerable hundred-year-old demons, a warning that even the most skeptical heeded.

Add a comment from SWTOR - The Bestiary of Tatooine