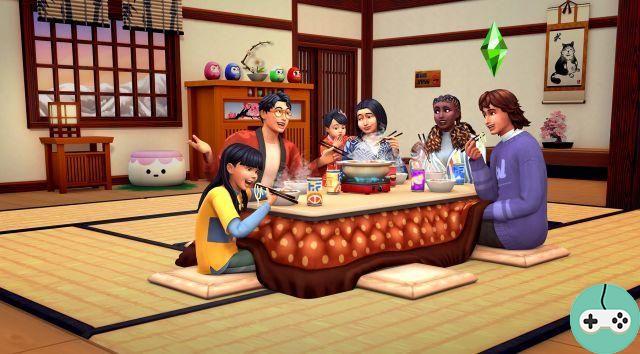 For once, the preview of this new Sims 4 expansion pack will take place in two stages. Today, October 28, I am giving you general information, based on a conference held a few days ago with developers from Maxis, but also on a special build that I cannot capture for the moment. I then planned a second article, once this restriction on catches was lifted, from October 30. But since I mainly want to discover the pack with my usual Sims, it may wait for the official release, scheduled for November 13, depending on when I can get access to the game.

The expansion pack revolves around two big topics: Asian culture and winter sports. This trend is therefore found at the same time in the outfits, the furniture, the region, the career and the activities. 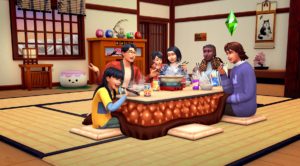 In Create A Sim, Sims are now able to dress in traditional Japanese outfits, with kimono designs for both men and women, complemented by flip flops and other typical footwear (I'm not a specialist so I 'ignore names). The hairstyles, as well as the shapes of the faces and the eyes, adapt to the style, for a one-way ticket to Japan. But they are also big ski outfits, garish color combinations and down jackets that double in volume. On the accessories side, we find a multitude of hats, scarves and ski goggles. For the feet, these are warm boots, après-skis, and walking shoes for hiking.

I have created a new house, which unfortunately I cannot show you, which has the architectural style that you can still see on the few screenshots provided. A great deal of attention is given to wood, from the parquet floors to the panels of the walls, with windows and doors formed of small squares and, of course, paper lanterns. Sliding doors with really pretty Japanese-inspired designs give the interior a certain cachet. Some items also come in less Zen and more kawaii colors, with critters with cute big eyes and bright hues.

Small funny note: to adapt to cultural habits, the Sims take off their shoes when they enter the houses (something that the girl during the demo refused to do to the dismay of the presenter!). 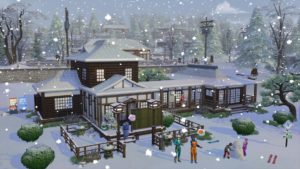 The world of Mount Komorebi is made up of three cities. Wakaba is a young and modern city. Senbamachi is more traditional, close to nature, with local legends about bamboo forests inhabited by magical creatures. Finally, on the sides of the mountain, just below the ski slopes, is the resort of Yukimatsu, with its vacation rentals.

Among the new activities that I could see during the conference, but also try it out for myself, there are of course winter sports: skiing, skateboarding and sledding. Tracks are available to train and climb the first levels of these skills safely. It's also the right place to take toddlers to toboggan with two-seater vehicles, snowball and roll in powder. Four real trails with incremental difficulty await Sims who feel able to do so at the top of the ski lifts. I know this is not the principle of The Sims, but it is almost a shame that you cannot really control the Sim on these tracks! It makes you want, in any case! 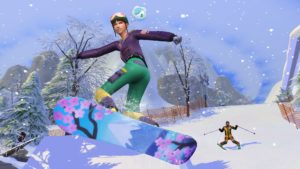 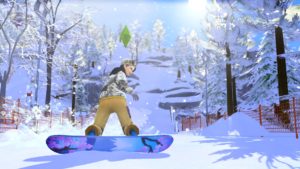 Yukimatsu is also the place to enjoy climbing walls and walks. A good thing about this last point: this group activity is playable. But the discovery of nature can contain dangers, it is advisable to leave well equipped (distributors are available at the starting points to acquire repellent sprays or other medicine in case of a problem). 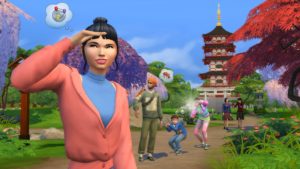 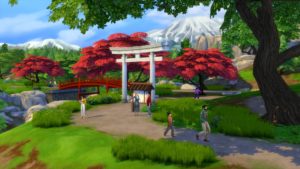 And, after all these adventures, nothing beats a moment of relaxation in the hot springs. There is a public place to enjoy it just below the ski slopes, but there is nothing to prevent installing a spring in one's own home either (there is even a tub / spring for those who are short of space). This Zen bath has no equal for treating ailments of the day, such as a sprained ankle or painful joints. The sharing of meals becomes more community-based thanks to the fondue device (the scene on the keyart, which I put in the introduction of the post). 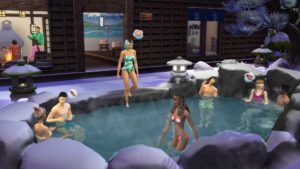 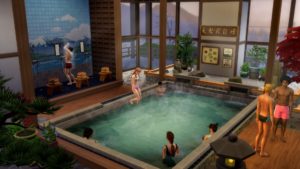 In addition to being able to sled and enjoy the permanent snow of Yukimatsu, children will also be able to enjoy a festival dedicated to them in Wakaba. This is also where the mascot of the world is, Yamachan, a big adorable green monster. Small peculiarity: children wear uniforms in this world when they go to class! The older ones will be able to start a new career as a dedicated employee for Infoka SA, a very demanding career, which occupies the Sim on average twelve hours a day, five days a week. 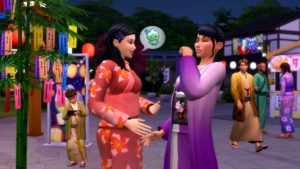 Finally, this pack comes with a free update that brings in particular the lifestyles, which are displayed in the penultimate tab, along with character traits. Sixteen in number, they are defined according to the way of playing. I, on the demo, created a fairly exploratory Sim, but I wanted to test the new career, which led me to spend twelve hours in the office, without forgetting the daily task (filling out reports, to build the logic and writing). Suddenly, within a few days of playing, she began to engage in a home lifestyle. On the program: sedentary, dynamic, very close to her friends, sociable Sim, lover of outdoor activities, junk food fanatic, dietetic enthusiast, adrenaline seeker and workaholic. Others are masked but, according to the icons, it should have to do with romantic relationships or cell phone use. 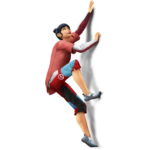 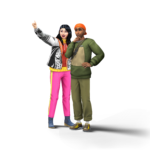 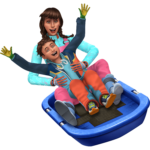 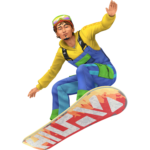 This concludes this first quick overview of the features of the Snowy Getaway expansion pack! Cool entertainment, probably not my favorite among the long list of packs released on The Sims 4, but it's a great thing to see The Sims continue to open up to new cultures and bring in an Asian pack, which I don't. can only greet. See you soon with a more exhaustive list of additions! 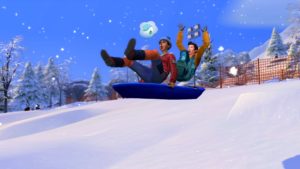 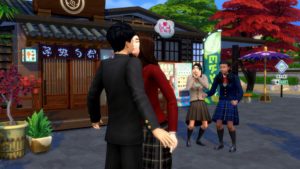