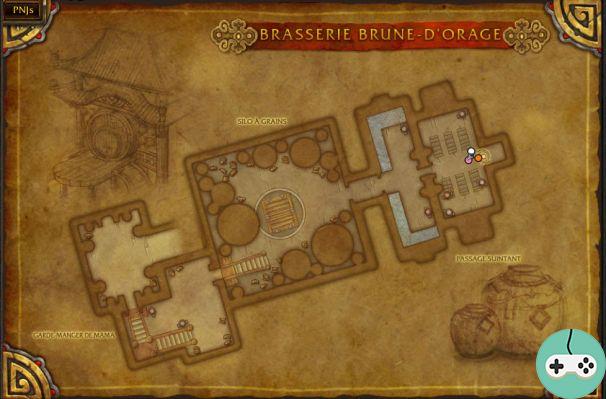 This dungeon, accessible at level 85 in its normal version and heroic at 90, offers 3 bosses. I will show you some ways to make the ballad go smoothly in heroic level 90 mode. For the record, as with all dungeons and raids now, you can find the list of boss abilities in the Dungeon Codex (Shift-J) if you want more information on a particular spell. 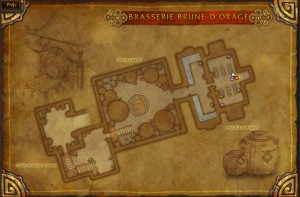 When you arrive in the instance, a counter (0/40) clearly indicates the first mission: kill lots of ugly monkeys (hozen). Once this carnage is carried out, it is possible to meet the first boss, Ouk-Ouk. 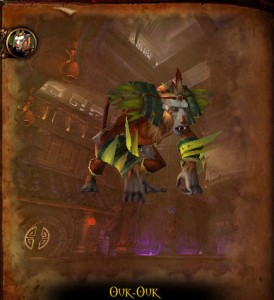 Even for a hozen, Ouk-Ouk has a reputation for being loud and rough. With his gang, he recently entered the Brune d'Orage brewery and opened its precious barrels to organize the most insane party of the century: Oulapalooza!

This boss is really simple and does not require a particular organization. The tank will just have to place it facing a wall (or at least turn it relative to the group) because it does damage in a cone in front of it (the healer might not like it).

The fun side of the fight is the barrels that run through the room. Obviously, except to like to have pain, it is necessary to avoid taking one. If you feel like a balancing act, you can even climb on it and slam the boss: it increases the damage he takes by 10% for 15 sec (given his great weakness, this is absolutely not a necessity).

Rolling Barrel Does Not Collect Foam: Kill Ouk-Ouk after attacking him with 20 rolling barrels of beer.

Once out of the monkey room, hordes of jumps, like rabbits, appear. Some of them, the Cognedurs, drop a good ol 'hammer when killed. This hammer can be picked up by any member of the party and can do devastating area damage against jumps! 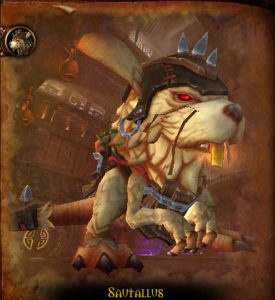 Sautallus is the bane of the farmers of the Valley of the Four Winds. This virmen of mythical proportions can swallow whole fields in a single night. Rumor has it that with his offspring, he infested the brewery and began to devour the rice and barley supplies.

This big bunny is also very simple: the hardest part is in fact not to be outside the room, the tanks often having the annoying habit of running in the room without waiting for the nice DPS who hit the virmens in the previous room. . Once Sautallus is engaged, he has two abilities that require attention:

Throughout the duration of the fight, he will summon little rabbits, jumps. Just kill them (use the good old hammer as on the previously explained trash to do area damage) while continuing to pay attention to the two sources of damage above and you will be fine. To tell you, the first time, they killed him at 3 because we were looking at the landscape outside. So at 5, it's all done!

Once Sautallus is dead, the path, blocked by a large carrot, is cleared and you can continue. 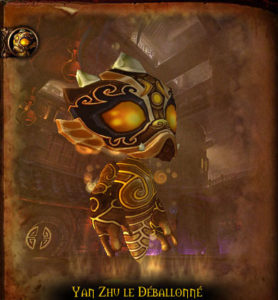 Desperate to save the family brewery, Uncle Gao set out to brew what he believed to be the ultimate beer, an elixir with a capsizing bouquet and infinite flavor. But his intrepid experience only served to create a bitter and extremely unstable Elemental creature, Yan Zhu the Unballooned.

This boss is preceded by several waves of critters resembling him, all sent by the mad uncle. These little tastes do not present a great difficulty. For the little ones, remember to cut the rays that connect them, this offers an improvement by regenerating life and mana.

Once the fight with Yan Zhu begins, you have to pay attention to the Black Hole Brew. Under your character's feet, you will see wispy brown areas appear. Each time, you accumulate 3 loads of beverage. If you hit 10 charges (and it goes up really fast!), You will be stunned for 10 sec. In order to dispel the alcohol, you have to stop moving or jump (all spellcasters with long incantations will appreciate ...).

Give priority to the little yeasty elementals that arrive quickly at the beginning. They will shoot a ray towards Yan Zhu who heals him. So no need to hit the boss while this ray is active: either you intercept this ray, or you kill them. A choice !

Otherwise, from time to time the whole room is carbonated, it will need to enter gas bubbles in order to leave the ground and avoid taking unnecessary damage. Finally, be careful if you find yourself bloated to move away from others and to avoid the walls of foam summoned periodically (well, it's not always easy).

Mystical Journey to the Plants of Link Ting: Collect the 30 golden hops hidden in the brewery (reward: hopping).

Thanks to you, the brewery is freed from the mad uncle. Take the opportunity to drink a good pint to recover from your emotions even if the low difficulty of the instance should not tire you too much.


Do you want to be up to date and know all the tricks for your video games? In gamesmanagers.com we enjoy playing as much as you do and for that reason we offer you the best tricks, secrets or tips for you to play non-stop. We offer you quality content and always updated to keep you up to date. That's why, in our website, you will find not only videogame guides but also tricks, secrets and thousands of tips so you can play to the limit. Are you ready to get it? Enter now and enjoy your videogame!
Horizon Shift - Overview ❯