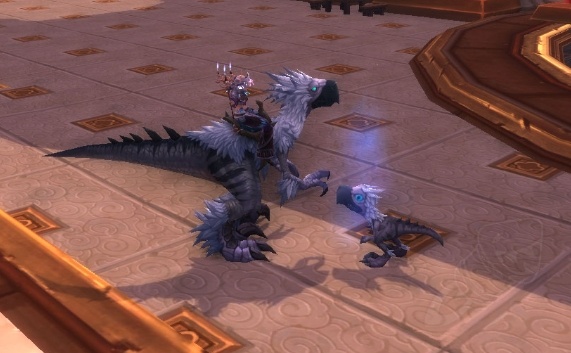 There is a Legion reputation that was previously unknown: Vengeful Talon. It was without counting on the cunning of the members of Wow head who managed to find out how it worked.

We're gonna have to adopt a Bloodscrew Falcosaurus. There are currently 4 known:

You have to wait for a Falcosaurus World Quest to be active in an area, then the Matriarch will appear. By killing her, you will have an orphan NPC that will appear, note that this orphan does not always appear immediately next to where you killed the matriarch, so be sure to take a tour if you don't see it. .

To be able to tame them, you will need food (listed each time above) which can be purchased from most vendors on the Broken Isles. If you plan to go on a quest, it might be a good idea to purchase these foods from Dalaran beforehand and keep them in your bag. Just in case.

You then have to raise the mascot to level 25, do mascot fights with it, complete world quests, kill bosses in raids and dungeons ... You will have as a reward an extra mount, which is rather nice? Of course, it will depend on which mascot you choose initially: Predatory Bloodscream, Feather Snowhunter, Viridian Sharptalon, or Brilliant Direbeak. You will also have a pretty cool interaction between the mount and the mascot: 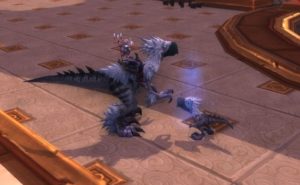 The real fun begins now that you have your mount. Go to High Rock on a Mount and talk to Aviana. You will receive in return a new PvP item that functions as Mists of Pandaria's Censer of Eternal Agony if you remember: Ivory Talon.

Use: Restores 100% of your maximum health and transforms you into Aviana's Avenger. In this form, you are hostile to all players and killing them earns you Marks of Prey. Only usable in areas with falcosaurs and PvP expeditions. Grants a PvP marker. (15 Min Cooldown)

Each Mark of Prey 100 reputation reward. You will therefore need 420 marks to be exalted in this faction. Fortunately, things are simpler from Honoré because it is possible to buy Ivory Feather to collect marks in battlefield and in Ashran.

WoW - Isle of Thunder: The Chroniclers