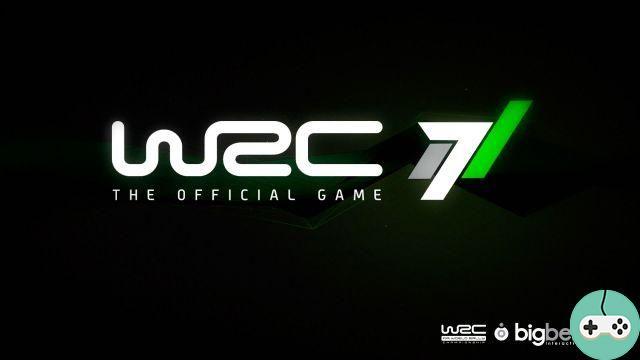 The rally game WRC (for World Rally Championship) returns in a seventh installment released on September 15 for PlayStation 4, Xbox One and Steam. And I had the opportunity to do some shopping on the PlayStation 4 version of the title.

As soon as the engine is on, I find myself in the action, launched on a first circuit which serves as a tutorial and configuration. Indeed, following my (pitiful) performances during this test race, the game offers me to play in automatic gearbox and in easy difficulty. No, really? Does the condition of my car on arrival or the trophy obtained have anything to do with this? 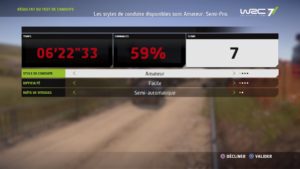 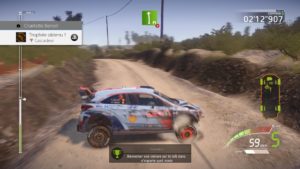 Like any racing game, the right trigger allows you to accelerate, the left one to brake and reverse, while the L joystick provides direction. 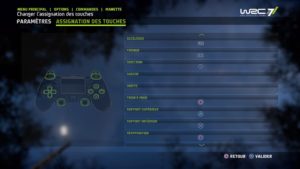 Playing in an automatic gearbox, I didn't need to change gears, unlike the handbrake (circle), perfect for taking hairpins. The square is the "panic button" to make the vehicle reappear when leaving the road (with a time penalty).

The sensitivity of the joystick is important and the physics very demanding, it does not take much to spin or hang off a cliff .... 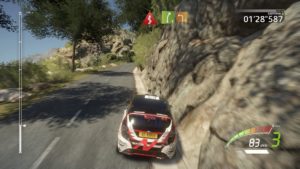 The terrains are varied, asphalt, snow, gravel, mud, changing the way the vehicle reacts to the controls. Suddenly, the habits taken on a surface must be readjusted for the next race where it will be necessary to tackle the laces of the road with a different turn and speed. The circuit becomes a series of skids (controlled, let's say), chaotic accelerations and braking. 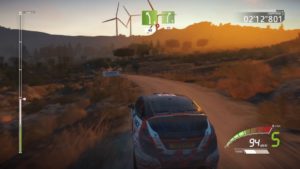 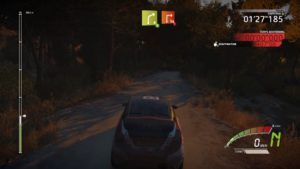 In order to anticipate the turns and avoid the catastrophe, the very precise instructions of the co-pilot are displayed in the middle at the top of the screen, also spoken to the audio. A gauge on the left fills up, indicating progress on the track. On the other hand, no classification of the other competitors, the race being accomplished alone as on real rallies and blind. The time displayed at the top right is there for information only, as it is not possible to know if the performance is good until the final scoreboard where the time is compared to that of others. 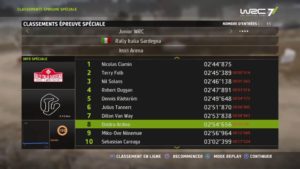 Here is a rather laborious race carried out in career mode:

There are three game modes: Quick Race, Career, and Multiplayer. After getting my hands on one or two free races, I embarked on a new, rather uninspiring career as a driver. 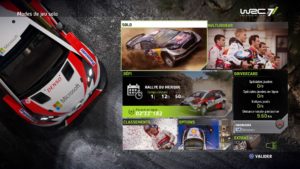 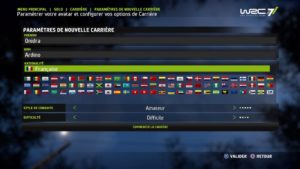 Once the character is created, I find myself in the dedicated interface from where I access the race calendar and my current ranking for the season. There is especially this space so important to visit after each race (especially for Sunday drivers): the garage for repairs. The maintenance team has a limited time between each race, 45 minutes, and the damage takes more or less time to be repaired, therefore asking to prioritize repairs when the vehicle has taken too much damage. As long as it's bodywork, everything is fine. If it concerns engine parts, it is quickly something else! 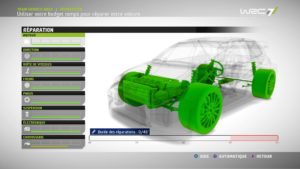 The races are linked and, after each, a general classification is calculated. In function, the morale and efficiency of the team are impacted. 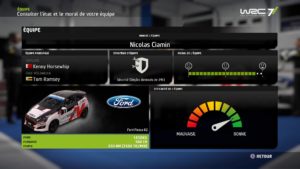 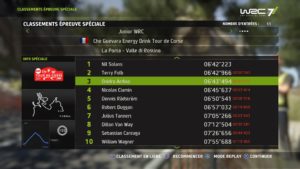 In all, there are thirteen World Championship rallies, spread across fifteen countries on four continents. Here are three other races, the first two are carried out on the Corsican circuit and the third in Italy.

The graphics are magnificent, the varied and realistic landscapes take us through villages and fields, tacking between bales of hay or avoiding the ravines of the steep roads of Corsica. The races take place at different times of the day, the sun is more or less high in the sky, creating lighting effects that are sometimes annoying although impressive. 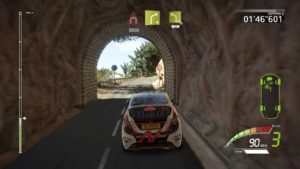 No music, just the roar of the engine, the screaming of the crowd (not to hit or it immediately resets the car with a penalty) and the voice of the co-driver who uses the technical terms of the rally with impressive speed. Right 3 runs 30 yards. Left 4 narrow short 40 meters. Left bracket 30 meters narrow bumpy ... A little understandable gibberish if it was not accompanied by icons with a color code displayed in the middle at the top of the screen.

It's beautiful, immersive ... but demanding. WRC 7 is aimed at the best drivers in joystick, with gameplay that leaves no room for misbehavior. Winning races and ensuring long-term success in championships requires a certain mastery, making the game inaccessible to beginners or occasional players who will quickly tire of the last places. If on the other hand a little challenge doesn't scare you, go for it!