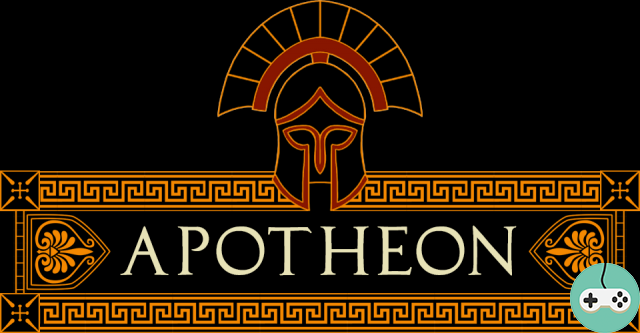 Do you know Hercules, the Greek demigod hero of the eponymous cartoon? Well maybe you also remember that song in which we can see the hero painted on an amphora? Yes, well, I'm going very far but it's just to place you in the time and in the graphic style adopted by the game. Because Apotheon is a 2D game with a very particular style since we have the impression of seeing a amphora come to life.

Available on Steam since February 3, 2015, Apotheon is an action / adventure / rpg-style indie game (although there is no actual leveling up) developed and published by studio Alientrap.

On the way to Olympus

You are Nikandreos (from the word Nike which means victory), the last hero, who wishes to take revenge on the gods who have abandoned humanity. Also, armed with a simple knife at the beginning, you will quickly find something to equip yourself more heavily in order to face the many worshipers of bellicose gods and mythological beings who will stand in your way.

For those who wish to revise their history lessons on Greek mythology, this game will be a perfect educational and fun book on the condition, however, of mastering English because Apotheon is not available in spanish.

Your adventures will take you from the palace of Apollo to the terrible hells of Hades and, if you prove yourself worthy of it, to the palace of Zeus at the top of Olympus. Because it is well known, why address the disciples when one can speak to the king himself. I do not guarantee that he will listen to you, especially if you have decimated half of ancient Greece before appearing before him. 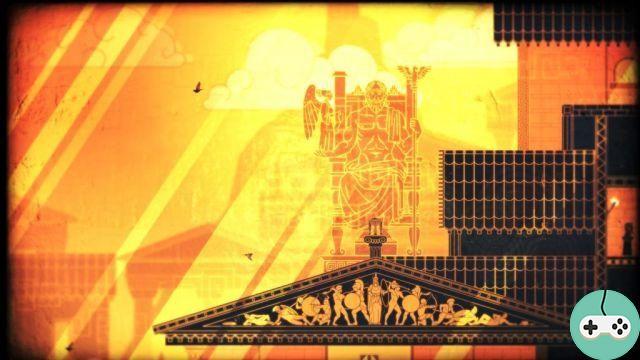 An enchantment for the eyes, a blow of freshness for the video game

I have always been interested in discovering new things and I am particularly tired of AAA titles which do not give me as much wonder as before. And sometimes UFOs appear, that kind of game that fills your eyes just because it offers new ideas. And where Apotheon is a UFO, it is graphically. So yes, it's 2D, it's not the last GTA V but still admit that it is a bit off the beaten track, right?

The game is beautiful, very beautiful, the levels are like paintings that move according to your pressure on the usual ZQSD and, little by little, you let yourself be transported to another world. The subtle mixture of colors gives each "house" (the palace of Apollo, the gardens of Artemis, the hells of Hades ...) an identity that is unique to it and in which we appreciate evolving.

All the characters are black (yes at the time, we didn't have as many color choices to represent living beings) and only a few touches of color will distinguish the ally, the enemy or the neutral character. 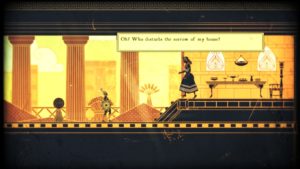 Meeting with the beautiful Hera, mother of the gods and wife of Zeus 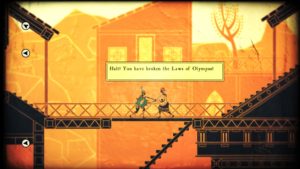 Defenders of palaces are often stubborn


As for the animations, they are intentionally very rigid. Indeed, when you move and that you attack, your character gives the impression of having forgotten a javelin in a very indiscreet place. The blood is materialized by beautiful red sprays and this blood flows freely, I can assure you. Nevertheless, this 2D aspect allows to attenuate this gore side which ultimately goes very well.

Divine but not so simple for a mortal

Although you are surprisingly strong and gifted for a human, you are still a mortal. You will need to exercise caution, ingenuity and sometimes discretion as you venture through the different levels. Going headlong like the Erymanthus boar will only have the effect of finding you skewered like a common ham. 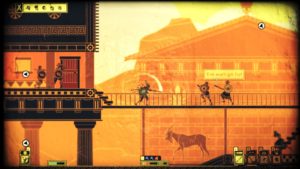 I thought I would take them all together ... 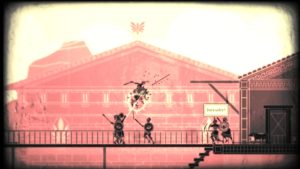 But they are the ones who got me 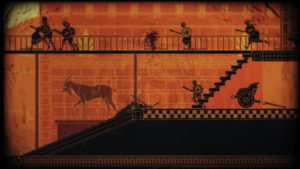 Another way to end up in lint for lack of discretion 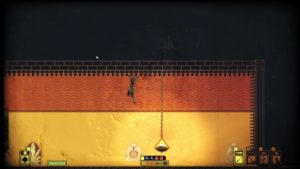 Some passages are in splinter cell sauce

The clashes wouldn't be so interesting if there were only simple humans to kill. Rest assured, Apotheon offers you to face other much tougher dangers such as a Cyclops or army generals, even Greek heroes or gods in person! 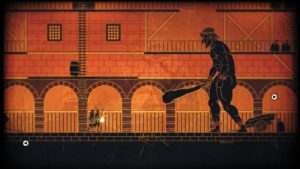 Get high against the cyclops and aim well 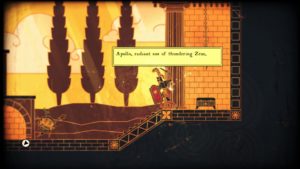 Once his shield and turrets are destroyed, he is more docile 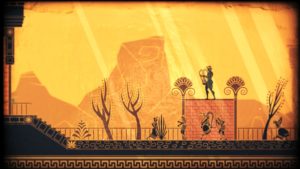 Apollo the god of music among other things ... 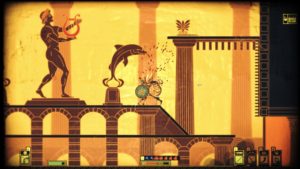 But a dreadful sun god who can consume you

The difficulty is well balanced, the game is neither too easy nor too complicated but can be much more formidable if you switch the game to difficult mode (the damage received is particularly increased). To get out of bad situations, you can use all kinds of potions (healing, invisibility, speed, light ...) and heroic weapons (the mace of Hercules for example). Some levels will offer you side quests that will allow you to meet many personalities from mythology but also to unearth fabulous treasures or to free your imprisoned brothers.

The game gives pride of place to the experience effect. Any mistake you make is nothing more or less than a way for you to anticipate future dangers and avoid making them again.

As you may have felt, I particularly enjoyed the experience offered by this game. Apotheon is this little bite that still allows me to believe that there are games that are interesting and beautiful in other respects than a big 3D . To tell the truth, I had not lived this since Child of Light which had been another of my favorites.

Available on Steam for € 14,99, Apotheon will offer you a new video game that you should not miss especially if you appreciate Greek mythology and the time in general.