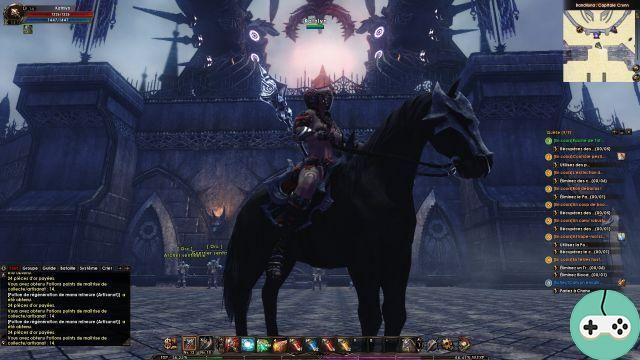 Archlord II Closed Beta began on June 17th. This MMORPG claims to be very focused on PvP while emphasizing the conquest of powerful equipment. If I have not yet had the opportunity to really discover PvP, I suggest you share my first hours on Archlord II. Be careful, as WEBZEN reminds us at the launch of the game: it is not intended for children!

First of all, don't be surprised if the client is in English: you will be able to change the game language in the options after creating your character. You start by selecting your server, five are available:

Then you have to choose between two factions: Azuni et Crunn. The Azuni are for humans while the Crunn are for Orcs. There are only two races available for beta. The race defines which weapons you will have access to: 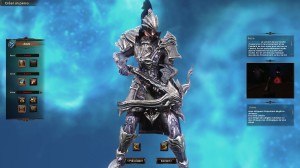 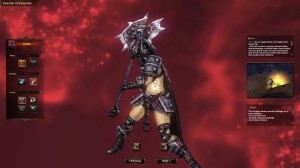 You guessed it, there are no classes in Archlord II, but archetypes defined by the choice of your weapon in main hand. You can also equip a second one but will not have all the skills available. So you can define quite freely what you want to be: protect your comrades, cut the beast or do a little of both.

I decided to make an orc, with a wand as my primary weapon. Finally, when we see the size of the rod, we wonder if the term for this weapon is judiciously chosen. We come to the customization of his character: you can define a whole bunch of elements as shown in the screenshot below. The choices are not limitless but enough to make a character to his liking. 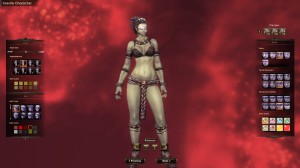 Still, regardless of the chosen morphology, I will have to carry around a pair of breasts worthy of an episode of Nip / Tuck.

Your character created and in play, you can change the language by going to Settings (Esc key). Click on Game, go down a little in the window to change the language. It will be necessary to relaunch the game for the change to be taken into account. 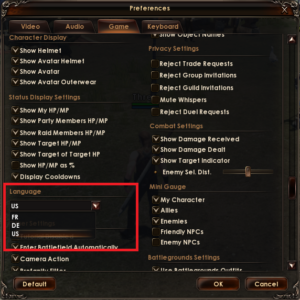 We are in a small hamlet with NPCs indicating that they have work for us. The tutorial is intended to be very discreet: it is a small icon that appears above the skills bar. The problem is that it suffers from some bugs: by clicking on the icon, the tutorial does not open and when it wants to, the explanations are truncated. There is a small display problem. To begin with, it complicates my task a bit, but does not discourage me for all that. 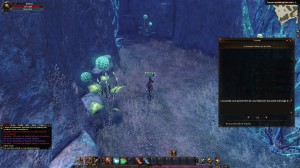 The quests are classic: go kill 5 contraptions, collect me 3 things, etc. We do not linger too much to read them. In addition, the size of the interface is not customizable, I find the writings a bit difficult to read at the beginning.

Let's focus on this interface: it is very classic (even a little old-fashioned): information on our character, compass, display of mail, menus, skills and quests. The latter also have a small icon. By passing your cursor over it, the icon changes inviting you to perform a left click: your character will automatically move to the place of your quest. 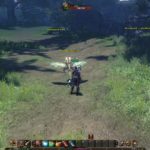 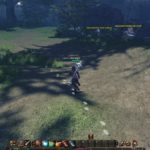 There are harvest points on the road: no need for special tools, you can harvest them directly via a right click or the F key. 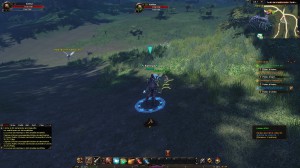 On the graphics side, I would say that we are in the norm. It's beautiful without being spectacular, the animation is fluid, the sound atmosphere is successful. And the scenario? Sorry, but I didn't notice it.

A somewhat disappointing point too: the capital is empty and sorely lacking in life. The same goes for camps and hamlets. It's way too quiet, no background noise, snatches of conversation. Keep in mind that we are in closed beta.

As I said previously, we have a primary weapon and a secondary that can be switched at any time. Your character gains in levels with points to spend in his statistics, but so do your weapons. Thus, with your primary weapon, you will gain 2 points per level and access to exclusive skills, while the secondary will gain only one. 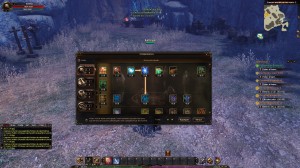 With the wand which is my main weapon, I have already unlocked several skills, especially those that are performed in combo. We can see a brighter column on the left: these are the skills exclusive to the main weapon. I also unlocked a spell that allows you to regenerate health and another healing spell. As for the secondary weapon, I have dabbled in everything, curiosity obliges.

Thanks to certain quests, you will earn consumables allowing you to obtain experience for the 4 weapons present. It's very practical, allowing you to try all the weapons in secondary and see which one is most comfortable with. I have a little crush on the Ax when the enemy is close to me after cutting it with the wand.

Visually, the first skills are successful, the sound too. We can see the Korean paw in there, especially with the information police in combat.

A host of menu

Due to the vast possibilities available to you, the game has 3 main menus. Let's see all this in detail.

This category determines what you will do with all the things lying around in your inventory: 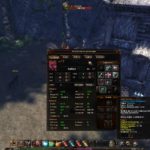 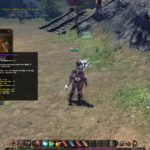 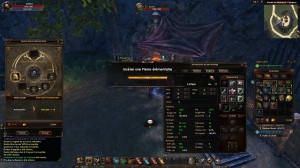 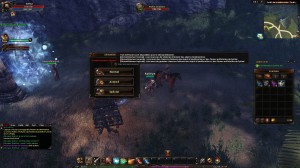 This menu includes all the essential information: 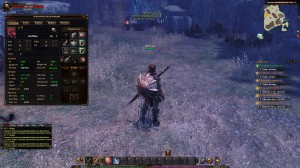 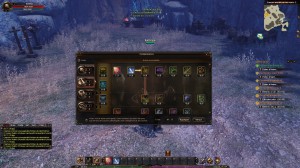 This is the menu for PvP enthusiasts. There are 3 categories:

My first impression was that the craft seemed quite complete on Archlord II: on the one hand the usual crafting and harvesting trades, and on the other hand the multiple possibilities via the object menu (discussed a little above) which provides us with additional ingredients. You have the following craft trades: weapon making, armor making, recipes, jewelry making, potion making. As for the Gathering, you have Ore, Herbs, and Ether.

My second impression was that it looks like a happy mess when you start. In the capital, Bandiluna, there are a host of NPCs selling plans and recipes for all trades. Suddenly, we are a little lost. 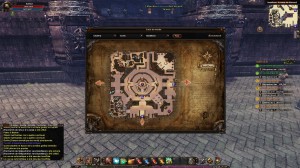 Dozens of NPCs for crafting.

And to finish a little more, the interface would benefit from being reviewed. The list of recipes is too condensed, all types (heavy, magic, light armor for example) are mixed ... 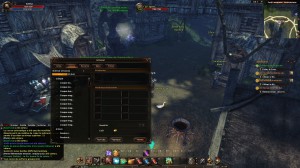 Help, there are too many!

I also find it unfortunate that making an item yourself costs gold. In summary, the system is clearly not ready for me, it is far too messy. 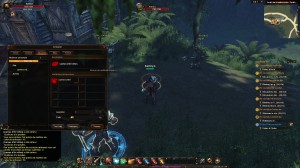 Food is all that matters!

The group interface is simple: you choose your role, the difficulty, the desired dungeon and you wait. For my first dungeon in normal level 10 mode, I was surprised to see that we were a group ... of two! It's original to say the least, disappointing for some, but for my part, I liked the concept. 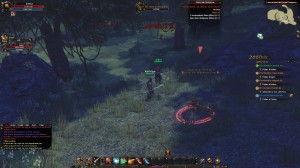 When you enter a dungeon, new information will appear on the screen in addition to the usual display of your fellow adventurers. There is a whole information area dedicated to the group, on the left. It indicates your enmity, and especially the experience acquired by the group. Once at 100% you unlock the ability to use a party skill that can come in handy. 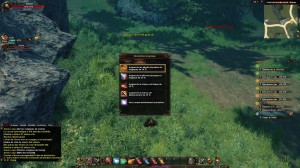 At the top of the screen, you have the status of the instance with the objectives to accomplish and the time you have left. Finally, to the right above the quest list, you have points. These points at the end will give you a score determining your prowess in the dungeon and assigning a rank. Quests will require you to reach a certain rank to complete them. 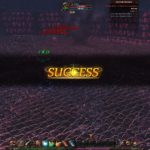 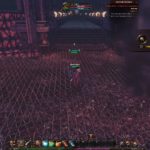 Once the score is determined, a new bar appears: you have little time to click on a random chest and discover a reward. I found it original, we don't fight for the end loot on the boss, everyone leaves with something. You can even after exchange the received object with someone or go to a mailbox to send it or even sell it at auction. 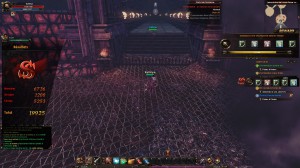 Along with two other adventurers, we tested the dungeon on hard mode. Here the group is made up of 3 members: one assigned to damage, one to tank and one to heal. We did well, but we must not relax too much and rush into the heap stupidly. We also have to keep an eye on the weather! 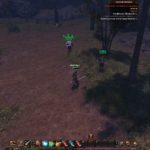 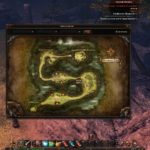 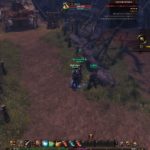 As Spiwak says so well, on one of the screenshots: "must buy popo". Indeed, all classes consume mana and you can quickly find yourself running out of potion. Always remember to have a good stock on you. Thank you to my two friends for this evening of adventure!

As indicated at the beginning of this article, I have not yet really tested PvP, too carried away by the flood of quests and the desire to explore the first dungeons. I took a short walk in the first contested area: it is made up of barricades and NPCs for both factions. It is necessary to destroy the installations and eliminate the NPCs of the opposing faction while killing the players. Unfortunately, I got there quite late at night and there were not many people. 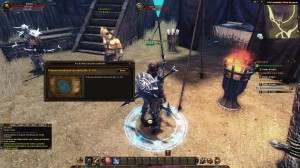 This closed beta of Archlord II comes as a pleasant surprise to me and I didn't see the time pass while I was discovering the game. I like the combat and skill system, it's a bit of a mix of several MMOs of the moment. We chain the quests mechanically, but fighting and unlocking new skills is a real pleasure.

In addition, if in the camps and cities the atmosphere is not there, outside it is successful: sometimes disturbing background noises, some music that particularly attracts attention ... 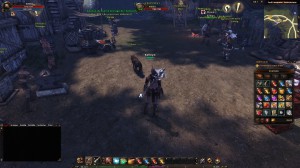 The craft starts off on a good basis but needs to be improved in order to be clearer and understandable for all. If the harvest is simple, the design of some objects turns into a real puzzle.

As for the dungeons, I can not wait to discover more, hoping that we will keep the concept of duo / trio while having groups of 4 or 5 alongside. Being able to play in small groups requires more concentration.

I hope that the interface can be further personalized: location and size of the elements, display of the time, etc. Functions that have become elementary today and are lacking here.

Finally, I would say that Archlord II has some good arguments that beg to be exploited and improved and is worth testing. We are only at the closed beta, so we can keep hope to see the few flaws erased. It also remains to discover the store. The game being F2P, I always tend to worry a little about what the store will offer.

SWTOR - Threat of Peace: Where are they now?