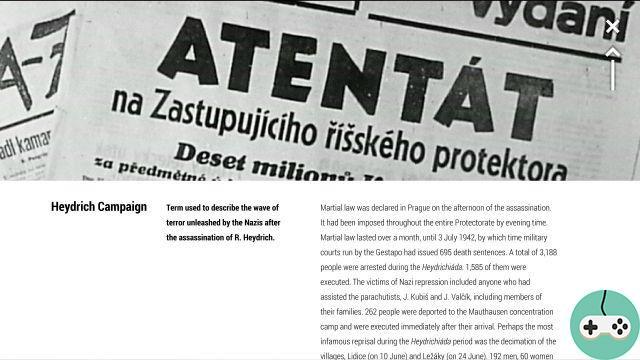 Attack 1942 takes us during the Second World War, under the Nazi occupation in the Czech Republic, to relive this historic conflict from the point of life of survivors. Based on testimonies and historical facts, this serious game is built around dialogues, interactive comics and real sources.

The story begins with a short video that puts us in the historical context with archival documents. In 1939, Nazi Germany annexed the present Czech Republic, creating the Protectorate of Bohemia-Moravia under the military administration of Governor Reinhard Heydrich. When he was assassinated by the resistance on May 27, 1942, the Nazi repression was terrible, plunging the country into a wave of terror that would last for several months. 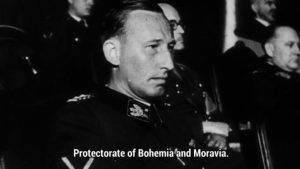 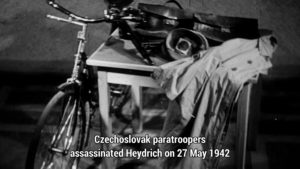 Even if the facts are real, the characters are fictitious. We play as a young person in modern Prague who helps her grandmother to relocate. Girl or boy, the choice is up to the player in the very first scene. 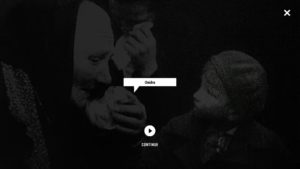 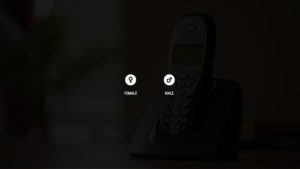 The discussion begins around an old radio set, the same one that once allowed the old lady to hear the announcement of Heydrich's assassination, the day the Gestapo came to pick up her husband, the grandfather of our heroine. She remembers and recounts the announcement of the assassination, the fear, the arrest of her husband, the daily deprivations, the regime of terror in place, answering her granddaughter's questions. Gradually, a big question arises because the grandfather never revealed the reasons for his arrest. Was he a resistance fighter? Or was he just caught in the cracks, collateral damage to the mass arrests carried out by the Nazi regime?

In order to understand, we will conduct the investigation. 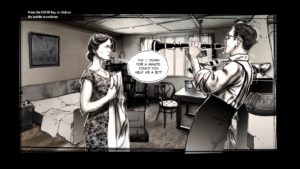 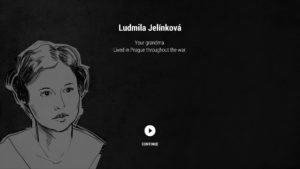 By introducing other protagonists with differing opinions, the game is questioned: are these resistance fighters heroes? Are they responsible for the thousands of deaths made in retaliation by the Nazis? Because the consequences were brutal, the death of the senior Nazi official resulted in the direct death of 1585 people, the destruction of two villages (Lidice and Ležáky), the deportation of more than 3000 Jews and the hardening of prison conditions in the camps. All those who directly or indirectly helped the paratroopers in charge, Jozef Gabčík, Jan Kubiš and Josef Valčík, including entire families, were deported and executed.

All these facts are reported and documented in the encyclopedia, accessible at any time in the game by pressing the Esc key. 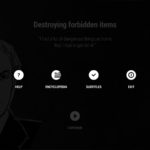 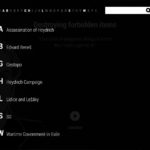 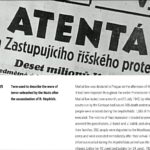 As often in this style of play, the player finds himself more a witness than an actor. There is, however, material to interact at several levels, for example by deciding the choice of questions to ask. 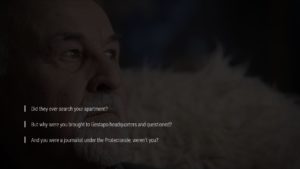 Or by acting directly during mini-games taking place on a fixed screen in which it is possible to interact with objects. Right at the start, I have to choose where to hide propaganda leaflets before the Gestapo enters the room. This is crucial to prevent the situation from worsening. For my part, I opted for the stove which turned out to be a good hiding place, offering me 1 piece, out of the two available per puzzle (here you have to hide the leaflets in the false ceiling to get the maximum). 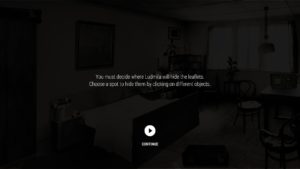 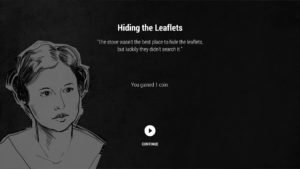 Each discussion with a witness is summarized in a card like this: 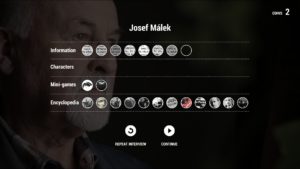 The objective is of course to gather as much information as possible from everyone to find out what they know about this time, and more specifically on the role played by our grandfather, but also to unlock the encyclopedia entries and complete all the mini-games to store as many coins as possible. Each piece allows the interview of a witness to be replayed, in order to try out other dialogue options to see if this can unlock new information. The mini-games can be replayed at no cost, thus offering a more than reasonable amount of coins to replay several times each upkeep. 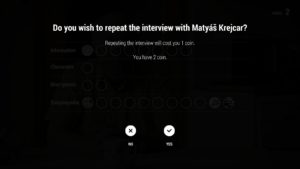 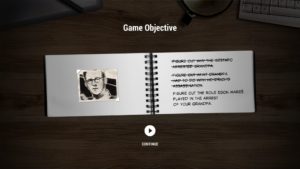 In conclusion, a gameplay trailer.

Combining drawings and actors, the game takes us into a dark period in European history and reveals many historical facts without giving the impression. Well designed, the plot is linked without heaviness, the characters are endearing and everything is done to avoid the weariness that can happen quickly given the amount of texts and dialogues: we can ignore everything, including testimonials and mini-games. Thus, when it is necessary to repeat interviews, there is no need to listen to known passages again. And when the testimonials get a little too heavy to take, there's nothing stopping you from going to the conclusion. Because yes, the subject is heavy and it weighs down the mood to remember that horrors like Auschwitz once existed. I therefore do not advise you to try the adventure if you already have a sad soul. Likewise, if English or Czech is not your strong suit, you will not take full advantage of it, the game is not currently translated into spanish. Beyond these two caveats, if you like the survey, you will not be disappointed. One last small reserve possible on the side of the price compared to the duration of play: allow approximately 3 hours to discover the past of the grandfather, a little more if you read all the written resources of the encyclopedia.

The game is available on Steam:

add a comment of Attack 1942 - A chilling serious game