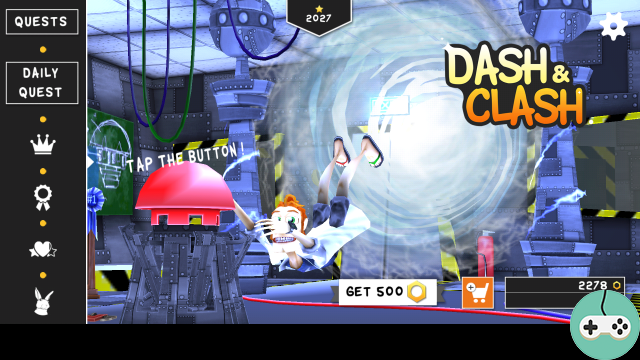 Dash & Clash is a game developed by a spanish independent, Eclectyc from Whiterabbit-Studio. This game is based on a mixture of "rail run" and combat phases. The "rail run" are games in which the principle is to advance on one or more lines and to avoid obstacles to go as far as possible. 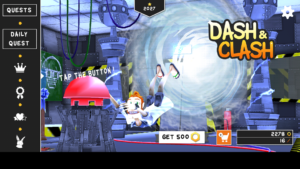 Dash & Clash (D&C) controls are easy to understand. On the left side of the screen we can manage the horizontal movements of our character while on the right side we manage the jumps, the passage under an obstacle and the powers of the character. The following image describes (in English) all of these commands. However, do not worry, a tutorial is there to present them when the game is launched for the first time. 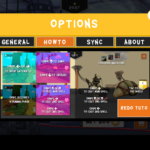 Being based on the D&C rail run principle is composed of three lines of progression. However, these lines are not clear and well demarcated as in the usual rail run. Indeed, there is the choice between playing in classic mode (making a movement to move sideways) or holding a finger on the screen and the character will move more or less when moved. To progress, the character advances on his own and it is therefore sufficient to manage obstacles, such as holes or barriers. For that the commands jump, bend down and lateral displacement will be your main assets. 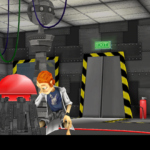 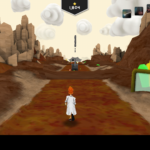 In addition to these commands you will have three powers that will change depending on the character used. Not having unlocked the three additional characters, we will only see the powers of the first one here: Lucien. Its powers are as follows:

These powers will be used to destroy certain obstacles and to face the bosses. These can be found at the end of each difficulty level. It is possible to dodge the attacks of the first boss by jumping over it and it is possible to move closer or further away to be able to choose the attack that you want to use. 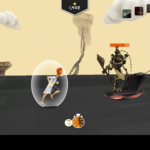 As you progress you will find different objects. I classify these objects in two categories: Common and Rare. Common items are always present in a game and many while rare items are isolated and may not appear.

When you fall into a hole or your health bar drops to zero the game is supposed to end. However, it is possible to extend it by spending a few adjustable wrench, you will then go back a few steps and be able to try again to pass the obstacle or the boss that was bothering you. You can also get this bonus without a wrench if you watch a short video advertisement. However this will require an internet connection and if we are not in wifi this is counted in our consumption.

The store is used to improve your powers, unlock new characters and other purchases. The three characters to unlock are Aramis, Freddy et Necrobot. Each has its own powers. They currently cost a few tens of thousands of nuts each but this is not insurmountable thanks to the quests which regularly give good quantities.

In addition to the characters you can improve their powers and the effects of bonus, buy some shields, or some mysterious boxes (which I do not recommend). You can also buy a pass for a quest if you feel like it but given the quest rewards I also recommend against it, there is little chance that it will be profitable.

Dash & Clash is available on android, so you can find it on google play. The game is free-to-play and has some ads. In particular, the black band that you may have noticed at the bottom of the images is the space dedicated to advertising. I didn't experience any discomfort with this space, so it's unlikely that you would trigger an ad without wanting to access it when you're in the middle of a run.

D&C also offers a ranking of your best performance in comparison with your friends or with all the players, the evolution of your progress in the game via google successes.

Following the D&C test my record is 2200 points. Will you be able to do better?


Do you want to be up to date and know all the tricks for your video games? In gamesmanagers.com we enjoy playing as much as you do and for that reason we offer you the best tricks, secrets or tips for you to play non-stop. We offer you quality content and always updated to keep you up to date. That's why, in our website, you will find not only videogame guides but also tricks, secrets and thousands of tips so you can play to the limit. Are you ready to get it? Enter now and enjoy your videogame!
SWTOR - The fight against the Revanites ❯