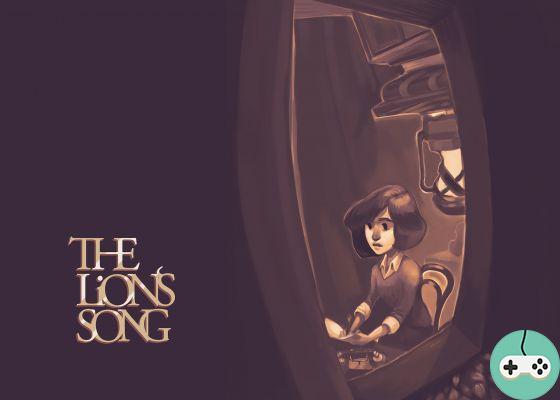 The Lion's Song is a cross between a point & click and a visual novel. In short, a sort of narrative and interactive adventure. Composed of 4 episodes, the first was released in early July and is available for free. All the more reason to be tempted and see if the charm works. What does the game of Mi'pu'mi Games ? 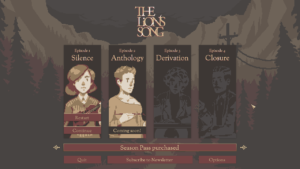 Silence, the first episode of The Lion's Song immerses us in the life of Wilma, young composer who following her last performance has her little quarter of an hour of glory. There is one problem though: she now has to compose a new song, but she can't.
In order to help him, his teacher, Arthur, sends him to spend a week in his chalet lost in the Alps. Will this loneliness be beneficial to find inspiration? 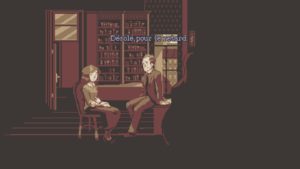 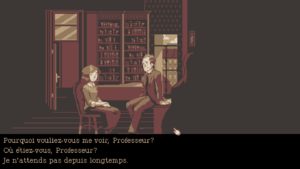 From the start we are invited to choose our response during the dialogues. All these choices will have an impact on the unfolding of the story, but also on the episodes to come.
Subsequently, we can also interact with the environment, the landscape, the objects, etc ... By passing the mouse cursor, we can see the name of what we point to be displayed. For the scene below, the forest, the sky, the cabin, the telephone poles or the path are all elements, which by clicking on them, can make Wilma react (and act). 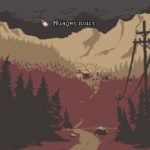 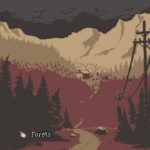 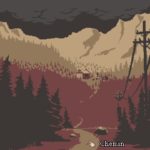 Once installed and ready to compose, Wilma will face a boredom: there is noise, noises that prevent her from concentrating and working. Where do they come from ? How to stop hearing them? It's up to you to find the origin of these noise pollution, helping Wilma to find the serenity and the inspiration to compose. By observing the scenery, by clicking on the appropriate elements, you will help Wilma to tame the noises and to create.

The sound environment is also well studied. The music spurts out as if you could hear Wilma creating it, the rain drumming in the window, the parasitic noises annoying Wilma are not forgotten either and maybe you will even sympathize with the young composer (from my side, j I must have thought about it for a good minute thinking I heard one of my cats meowing. But no, that strange little noise was part of the storm raging outside!). After all, the sound is the driving force of this story, it was then essential that it be present, effective, intelligently integrated.
In short, whether it is the music or the sound environment, it is a success! 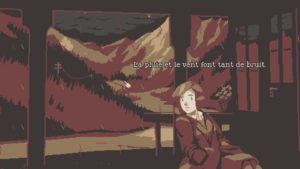 On the visual side there is something soothing, with these slightly sepia tones. The animations are very simple but do their job. Only small downside for my taste: the choice of the font. The pixelated aspect is unpleasant to me, and if it is in keeping with the graphic style, it totally denotes the story that is being played out. A slightly softer font would have seemed a better choice. 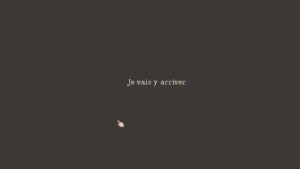 It took me less than an hour to complete the first episode of The Lion's Song. Thanks to the different choices we will have good replayability, an option which is very tempting because being immersed in the creation of a work is a moment out of time, quite magical. Where do we find inspiration? What elements influence our creation?
Steam Achievement Hunters will also have additional motivation to restart this Episode 1.
You have no reason not to be tempted by this charming first episode and to try in your turn to help Wilma to compose the work of her life.
The Lion's Song - Episode 1: Silence is available for free in spanish on Steam. The season pass is € 9,99

We end with a video unveiled at gamescom: episode 2, Anthology where we will meet de Franz, "a brilliant painter with a unique vision of the world". His story will mingle with that of Wilma, because remember, the choices made in episode 1 will influence episode 2. Finally, The Lion's Song is scheduled for Android and iOS.

add a comment of The Lion's Song - First episode