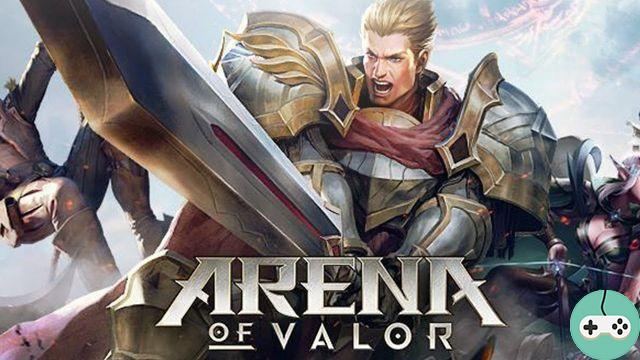 A long, long time ago, in a distant galaxy, I played League of Legends before returning to my first loves (Dota 1 & 2) and to my current love (SMITE) ... Today, Tencent Game, the parent company of Riot, offers us a MOBA on mobile which seems quite popular, in view of the various articles published on the net. So I could not leave it open, here is my humble opinion of the game tested on an Asus Zenfone Max.

On this side, the artistic direction remains on the League of Legends, whether at the level of the characters that of the turrets, even of the various arenas of battle. The character design is also pretty close when you look at it closely. Nothing more to say on this point ... the job is done right. 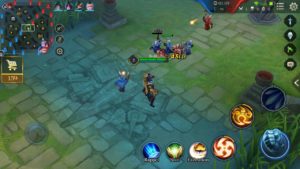 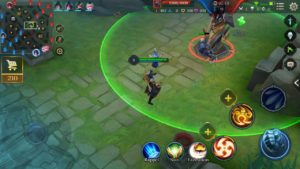 To put it simply, we are sticking to the classic. You select your game mode, your character, and presto, in the arena.

You will find the skills, here three in number: two classic and one ultimate, which can be improved by leveling up, an activatable talent, a heal and recall. You will also find the shop offering a number of items that can be bought quickly via the recommendations of the game or a set predefined by you. 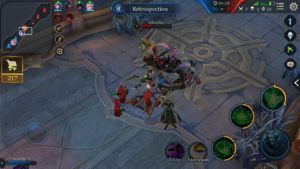 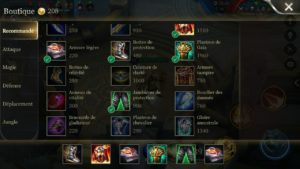 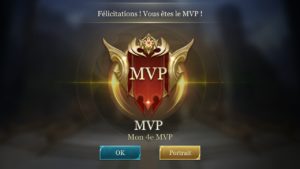 Thing that I really liked: the well thought out ergonomics, offering very intuitive control and use of skills. The left thumb controls the movements, the right thumb the skills. However, left-handed players may have a little more trouble with this kind of setup.

Here we have the usual game modes such as the classic 5 against 5 on three lines, the ARAM mode (All random, All middle) which is aptly named (one line, no possibility to enter or heal off base) , 3 vs 3 or 1 vs 1. However I have also been fortunate enough to see some temporary game modes which are quite fun and change from the usual gameplay, like the battle of the hooks, which involves using hooks to capture zones. 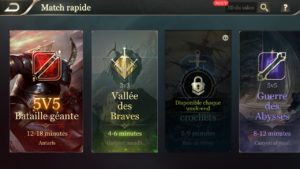 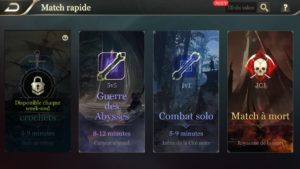 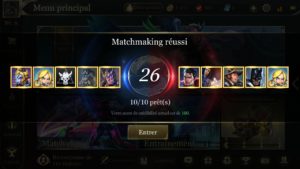 The games usually do not exceed 15 minutes, except in the event of a really intense battle. I've mostly seen one-sided battles so far, but let's bet that will change once we get to the max level of the game.

Many characters are unlockable via gold or coupons. At the time of this writing, an event offers to offer you a character for each series of three parts. We find the different usual MOBA classes: Mage, Sniper, Tank, Assassin, Warrior, Support. You will have plenty of choice to find what you like in terms of gameplay. 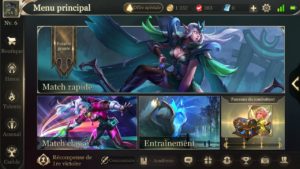 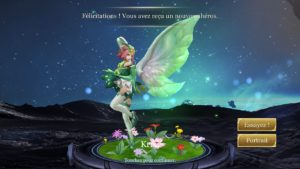 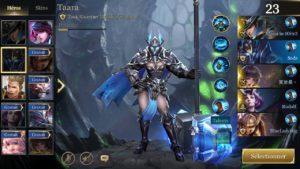 Unfortunately, as in many games of this genre, the balance is totally "WTF" for some characters. We hope that this will be balanced over the updates.

In the chat tab, there is the general chat and the spanish chat. I found the same feeling there as on League of Legends: arguments, insults, and people who believe they are on Tinder / Meetic as soon as a female nickname posts something.

In play, the real concern comes from the players who decide to AFK a whole game and greatly disadvantage the team which is quite often chopped down. I have already found myself in a 2 against 1 game ... too bad some might say.

Here we have a MOBA quite strongly reminiscent of League of Legends in many ways. Porting to smartphones is, for its part, really successful, and offers the player a fairly good experience for fans of the genre. If we remove the few bugs here and there and the community which is, in my opinion, a bit special ... we can have a good time on it.

The game has been available since August 11, 2017 on Google Play Store & iOS App Store.

add a comment of Arena of Valor - MOBA on mobile