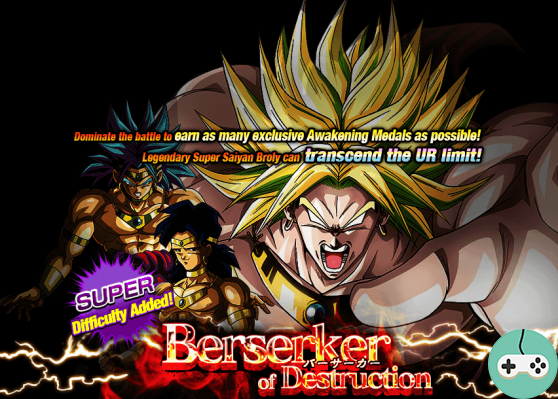 In this guide, I'm going to break down the different levels of the Berserker of Destruction event also called Broly. This event will allow you to upgrade 3 versions of Broly, the first of which can be farmable while the other two are in the summoning portals:

Prologue to the ruins

The three versions of this level are not very complicated and will allow you for the first success to earn 3 dragon stones. In these events, you will fight an Endurance type Broly each time. To pass the level easily, it is therefore better to take Power type characters to block and do damage easily.

Broly END can only be obtained in the Z-Hard version costing 20 ACT. The normal Broly and its Dokkan version can be used on the same team with the Broly Carnage by giving it KI + 2 for each character. Please note that the drop is not 100% guaranteed. 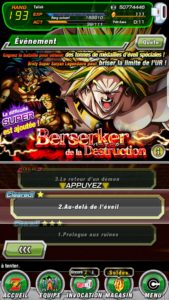 We're getting serious about getting Broly's medals back. This level will cost you 40 ACT and put you in front of a Power-type Broly. Remember to take the left path on the board to increase the KI gauge for your characters.

Broly has a special ability called "Carnage" which will increase his attack and defense. Some characters can turn off this ability to deal normal damage. The characters going on special can also pass this defense according to the damage they inflict (30K defense with the ability). 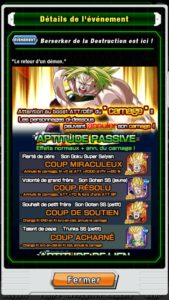 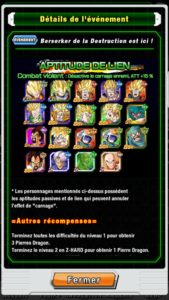 Besides building a "nuke" type team to kill Broly in one hit, you will need to build your team around the characters above. You will need at least 2 characters with the passive or 4 with the "Violent Combat" link. Some characters like the SR Trunks fall quite often in summoning portals.

There is a multitude of possible teams for my part I left with a team as follows:

The combat is not very complicated in itself but you will have to pay attention to your positioning to keep each time your characters deactivating the Carnage when Broly will attack to reduce your damage suffered. These characters not hitting excessively hard (apart from native SSRs) remember to keep your KI balls from those doing high damage. 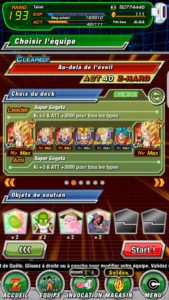 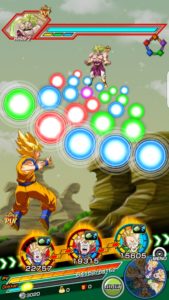 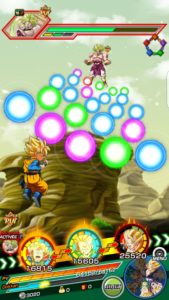 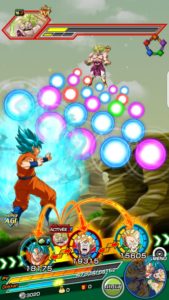 The return of a demon

Last level of the event and not the least. It costs 50 ACT and will allow you to earn 7 medals at once but the difficulty is completely different. This time you face 3 Broly in 3 different fights.

The big difference with level 2 is that characters without the Anti-Carnage bond / passive will simply do no damage (Gogeta SP 10 deals 150 damage). There are two types of teams possible for this level with two totally different orientations

In this team, only 4 of your characters will do damage, namely those with Anti-Carnage. When choosing the characters for this event, the best thing to do is to start with 3 or 4 of the following characters:

For the remaining characters, you will need to complete with a leader / friend with KI +2/3 but above all a blocker character (Super Vegeto, Golden Freezer, ...) or a special attack blocker to avoid the general attack. (Gotenks, Bardock, ...).

The second team will focus on reducing Broly's defense to reduce it so that all of your characters can attack normally. You will need two characters with this ability which you can find in the following list. The best bet is to take Great Saiyaman 2 and Mighty Mask as they can be obtained for free.

For the rest of the team, you will have to think about taking characters that can give KI as well as characters that can do great damage. Be careful, however, it will be necessary to take into account that your characters lowering the defense must often go on special to continue to make Broly vulnerable.

Good luck to everyone in fighting Broly on the different levels. Feel free to share your tips that have not been listed in this guide.


Do you want to be up to date and know all the tricks for your video games? In gamesmanagers.com we enjoy playing as much as you do and for that reason we offer you the best tricks, secrets or tips for you to play non-stop. We offer you quality content and always updated to keep you up to date. That's why, in our website, you will find not only videogame guides but also tricks, secrets and thousands of tips so you can play to the limit. Are you ready to get it? Enter now and enjoy your videogame!
BlizzCon 2014 - WoD Cinematics ❯

Warlords of Aternum - The new Innogames not to be missed