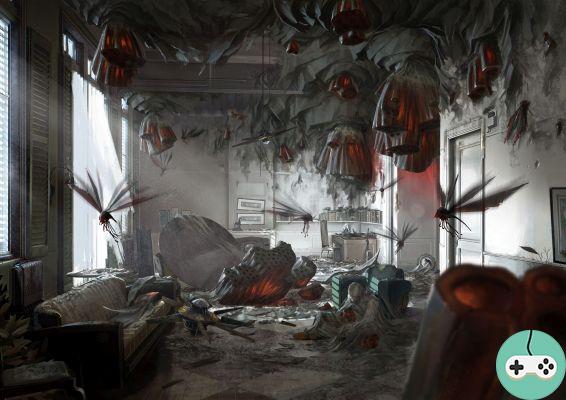 The developers of Arkane Studios have sent us beautiful images illustrating the artistic universe of Dishonored 2.

Originally intended to be a mood board, Sergey Kolesov has pushed the boundaries here by showing the bay bathed in sunshine and at the same time hit by rain, while the mountain appears to be blowing its dust in the direction of the wind. 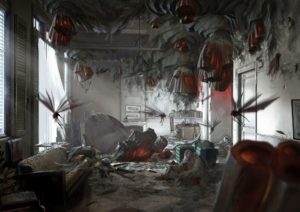 It is the result of an inspiration from the design team for a new feature in the game. Blood flies are a good example of this moment when art meets history, and where animation and gameplay merge. . 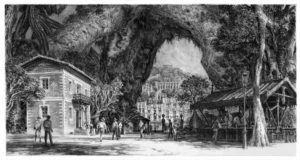 “Imagine Havana or Genoa with public places where trees are enthroned that are far too giant to be felled”: this was the brief given to the artist Laurent Gapaillard to imagine the decorations of the park in the city of Karnaca. 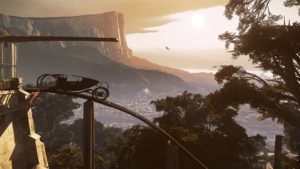 Shindaerey Peak offers a natural panorama and allows players to orient themselves no matter where it is in the city of Karnaca. Here, the view is from the train station overlooking the city, before entering the house of the mad inventor Kirin Jindosh.

Arkane Studios really enjoyed creating meaningful environments and the Dust District is a prime example: the giant peak with silver mines, a wind corridor that leads a neighborhood to its end, and the industrialization of the neighborhood with giant wind turbines: such was the initial thought to create the district of Karnana.

Built on the remains of an old fort, Duke's Palace is the result of a mix between noble and classic materials, with modern lines. 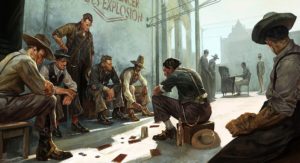 Karnaca is the result of years of urbanization, including the different waves of settlers which help to give it, in addition to the natives, a very cosmopolitan population. 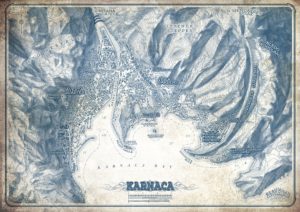 Thanks to the Serkonan Cartographic Society, some of the maps are topographic! The last wave of settlers came from Gristol. They began a more structured urbanization with boulevards, a hidden port, and even a large canal dividing the island in two, from Quintana Gates to the Far North. 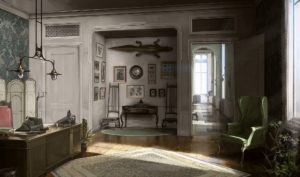 With this image, Arkane wanted to mix a British cabinet with a chic interior from Cuba or Italy. The goal was to create a contrast between Dunwall (location of the first Dishonored) and Karnaca (main location of Dishonored 2) in terms of tone and lighting. 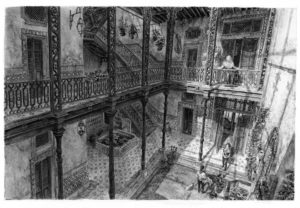 Arkane Studios has drawn inspiration from their various trips to Barcelona: the architecture of the Spanish city has greatly influenced the artistic team and this will influence how the player will explore this environment. 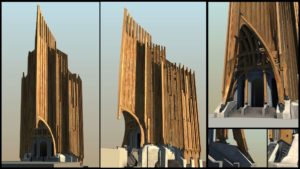 Because the wind and dust can be particularly violent and damage the buildings of Karnaca, the designers of Dishonored 2 came up with the idea of ​​making them look like a block of diamonds.

This is very promising for this game scheduled for November 11 on Xbox One, PlayStation 4 and PC! Want even more?


Do you want to be up to date and know all the tricks for your video games? In gamesmanagers.com we enjoy playing as much as you do and for that reason we offer you the best tricks, secrets or tips for you to play non-stop. We offer you quality content and always updated to keep you up to date. That's why, in our website, you will find not only videogame guides but also tricks, secrets and thousands of tips so you can play to the limit. Are you ready to get it? Enter now and enjoy your videogame!
Destiny - Lords of Iron: What to know ❯