Dropzone: Preview of an RTS mixed with a MOBA 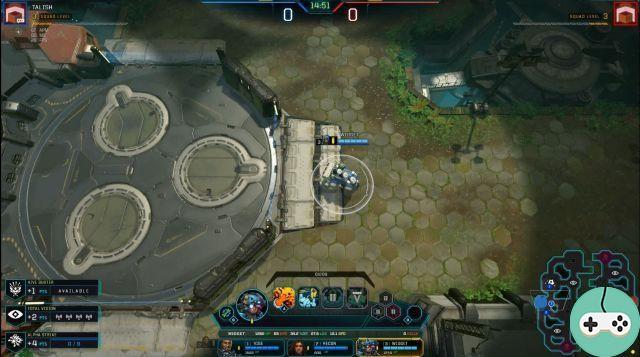 Today we are going to look at the game Drop zone developed by the studio Sparkypants in partnership with the German publisher Gameforge. Sparkypants is a company made up of several video game veterans. They notably worked on licenses like Sid Meier's or Kingdom of Amalur. 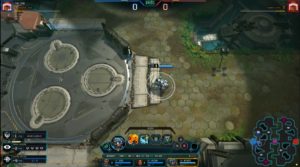 On paper, Dropzone is presented as an RTS (real-time strategy game) as can well-known titles such as Starcraft 2 or the Command & Conquer license. Most games of this type revolve around two main axes, namely the macro and micro management of its units and resources. It is also these mechanics that make the handling of these titles can be quite difficult for most neophytes. It is with this in mind that Sparkypants wanted to make its title accessible by limiting its two aspects to a minimum. In practice, we can see that the title is largely MOBA type because your units each have four spells including an elite as we can see in titles like League of Legends or SMITE.

Now let's talk about what the title of Sparkypants does. From the launch of the game, we go through the tutorial box where the basics of the game are laid through different objectives. The goal of the game will remain the same, namely to recover energy cores and transfer them to his ship (it's a bit caricatured). There are currently several cards but it remains symmetrical for the two teams. There is therefore no disadvantage on this side as we can have seen on some recent titles. 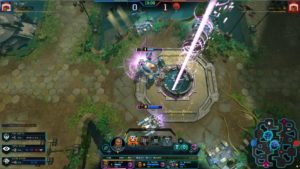 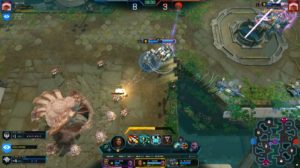 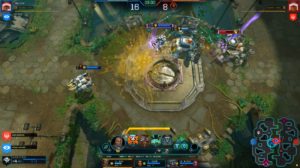 Each team has three robots with different abilities and profiles. They are grouped into three categories well known to MOBA players:

As said previously, your characters will each have 4 activatable spells but also three passives that can help or increase certain aspects of your characters. For example, a character could have a passive allowing him to gain VPs if he kills an enemy. Each of these abilities (active or passive) can be modified at will in one of the game tools. This will be used to make different character patterns to overcome all the possibilities that you may encounter in your matches.

For matches, whether against the AI ​​or against a player, you will start them with a draft phase where you will choose your three characters as well as the profile that you have defined in the creation tool. For the moment, there is no character ban like on current MOBAs but this could be the case with the arrival of the tournament mode that the title will offer. However, it is possible to choose atypical compositions. For my part, the majority of my games after taking the game in hand was to line up 2 DPS and 1 support.

The goal of the match is quite simple, you have to acquire as many points as possible. These points can be earned in two ways:

The second option is the most profitable and the hardest in itself because your enemy will do the same, while preventing you from doing so. During my games, I was able to experiment with several strategies:

The second strategy was effective because my two DPS characters had been equipped with level 1 or 2 abilities which gave me a significant advantage early in the game to score as many points as possible. It is also a double-edged sword technique because a game lasts 15 minutes. There is no point limit which can be complicated at the end of the game with certain strategies and / or if the enemy has gained too many points compared to us. 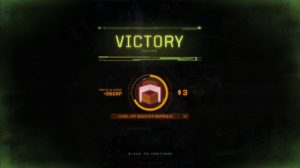 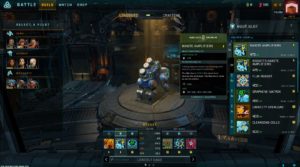 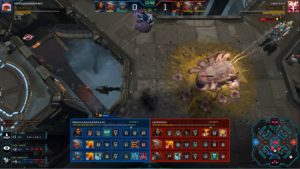 At the end of each game, you will have the right to a summary of your match such as your deaths or your enemies downed as well as the various key points of the match. Last point on the title, it has a store where you can buy boosters containing abilities for your characters. If you have duplicate abilities, you can put them in the crafting module to unlock new ones.

To conclude on Dropzone, the title even in Alpha is quite promising and easy to learn. The ease of customization and the possibility of synergy are also an asset for the title. The mix of gameplay between RTS and MOBA may find a taker among players. I only hope that the title will not be released very soon because if it does, it will quickly be overwhelmed by all the MOBA releases that have been underway for a few weeks. Dropzone will be available later this year in Free to Play and surely on the dedicated Gameforge platform.

Add a comment from Dropzone: Preview of an RTS mixed with a MOBA