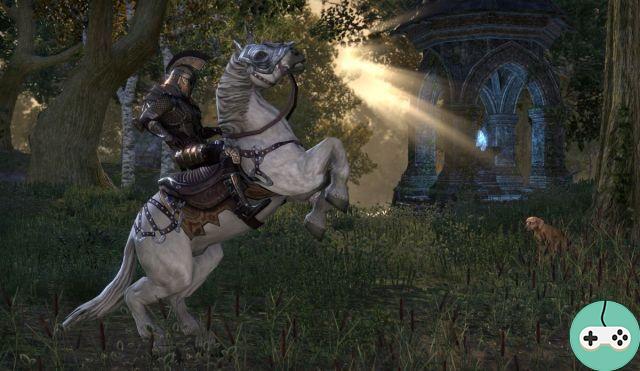 The Ebonheart Pact is one of the game's three factions, represented by the Argonians, Dunmer, and Nordics. It is this last race that I have chosen to present this alliance to you, in any case to show you the starting area and some quests.

After escaping from prison, here I am in what appears to be an inn, the Prophet in front of me. As he predicted, we returned to Tamriel to different places. So here I am all alone to face an unknown world and unmask Molag Bal's agents.

The Prophet tells me that I was stranded on a frozen island off the coast of Skyrim. An island ruled by a certain Rana. A certain Mathor in the inn tells me that this island is called Morneroc. On the ground floor, here is Captain Rana, a Dark Elf, whom I hasten to visit. 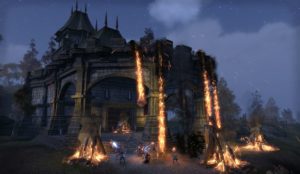 A ship was sighted off the coast. Perhaps the sign of an invasion, in which case the captain wants the inhabitants to be prepared for an emergency evacuation. After they saved my life, I can help them anyway. Three inhabitants in particular have moved away, and the captain would like me to find them to warn them. So here I am in search of Darj, at the Nimbus mound.

So here I am outside, in what is the Village of Morneroc, picturesque, invaded by snow and enveloped by the soft light of an aurora borealis in the skies, which quickly gives way to a sky filled with stars.

Before setting off to explore this island, I want to take a little time to visit the village, to enter the houses. And I realize that it is indeed important to explore every nook and cranny, every little piece of land. You can discover really interesting things there. Lots of reading in particular, which can teach you a lot about the world of the game, or even make you progress in a talent tree, but also full of useful objects, such as lockpicking tools, recipes, etc.

Well, a potential threat is still lurking, let's not waste any more time, so I set off to find this Darj. He tells me that a necromancer is wreaking havoc in the area and therefore asks me to help him eliminate him. Me, I'm a nice guy, I'm always ready to help, so let's go, head for the Nimbus mound to unlock the wicked magician, with the added bonus of plenty of skeletons to eliminate on the road.

I therefore summon the Dragon Priest, who tells me the procedure to follow to enter the mound. All I need to do is collect three runes, which will then unlock the entrance. Once placed, the Nimbus Mound finally opens up to me, leaving the field open to eliminate the necromancer, and discover that he was working for the Alliance.

Now I need to find Sergeant Seyne, who is near a brigand camp in Frostbite. She is suspicious of them and asks me to "borrow" one of their outfits to infiltrate them and find out what they're up to. Well, I admit, infiltration is not my strong point, and I had to deploy treasures of discretion to finally arrive in the mine of the brigands and discover that they too are plotting with the Alliance.

It is time to leave now, I must quickly warn Captain Rana, so that she organizes the evacuation as quickly as possible. These people have helped me, I owe it to them to return the favor. The Alliance has indeed landed on the island, and I need to go and light the beacon to warn the mainland.

Unfortunately, by the time I light the lantern, those pesky Alliance warriors took the opportunity to attack the village and set it on fire everywhere. There are still people trapped in the flames in their houses, I cannot bring myself to abandon them, even if it means losing my life there too.

Despite the patrolling troops and the flames burning me, most of the villagers are unharmed, and gathered near the Tomb, awaiting Rana's orders to evacuate. We will have to go through Mornetombe to escape. A name that really doesn't mean anything to me.

Spike traps are placed on the path, we will have to deactivate them, Rana and I, so that the refugees can pass safely. Contrary to what one might think, the tomb is far from empty, and the skeletons of ancient warriors obviously do not appreciate the fact that we come to disturb them. But whatever, I made a promise to myself to lead these villagers to safety, I would keep my promise, no matter what the pitfalls.

The trip was far from easy, but we finally managed to cross the tomb and reach the cove where two boats await us, ready to weigh anchor towards Dhalmora. 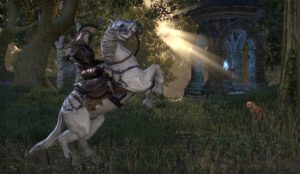 Here is the first part of our adventure in the Ebonheart Pact which ends there. This tutorial area was really very enjoyable to navigate, despite the fact that every now and then I couldn't help but wonder why we were asking so many things of an unknown guy, as we were drafted in the article. of death. In terms of history, this is really the only complaint I could make. Apart from this small detail, the quests are linked quite easily, except for some times where you can be a little lost and you wonder where to go, but personally, that does not bother me. The quests besides are not very repetitive. I hardly had the feeling of "bashing", of having to kill monsters with a shovel to complete an objective. And the whole background certainly has something to do with it as well. And this is what makes, in my opinion, the richness of this first zone, all the small details, like the books that can be found everywhere, plunge us into a universe, where myself, do not not being roleplay at all, I got caught up in the game of thinking like my character and acting like I would in real life.