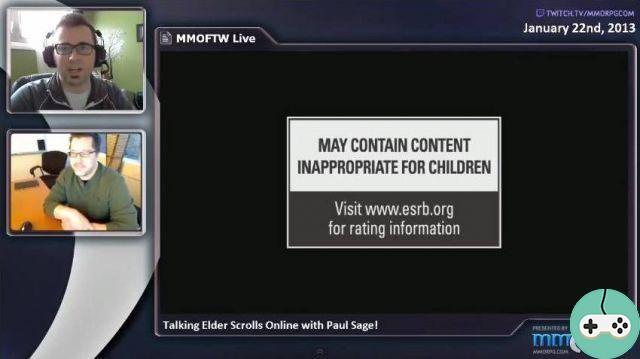 At 19 p.m. last night, the MMORPG.com site organized a live chat via Skype with Paul Sage, Creative Director. I was not able to follow the discussion too much but fortunately, the organizing site subsequently uploaded a summary of the interview with the recording, allowing you to listen to all this with a rested head.

I did the full translation of the interview, while Nicou was doing a summary, so here is a short version and a long version, like the DVDs!

First, Paul spoke about how thousands of players have already registered for the beta. He also mentioned how exciting it is to finally be able to reach that milestone and get a little closer to when the game is in the hands of the players. Compared to the current beta process, the work begins now. Paul informs us that the beta will primarily involve a small group of dedicated testers. The point is to really take everything they've identified in the game and see how the players react. "If it fits" with the players and if there is the same enchantment that brings and returns as well as for the players who want to be part of this world. It's going to start small before it becomes a larger-scale beta, a "does this keep people addicted to" style test. But the part that really intrigues him is seeing people dive into the Alliance Warfare (PvP) experience in Cyrodiil.

Beside, Paul says that they have already tested the Mac version of TESO well, but he needs to ask Zenimax Techs if there is a planned beta date.

On the idea of ​​a "guild beta", Paul states that there will be no beta phase that will focus only on guilds. On the other hand, guilds will be invited with everyone and there will probably be times when people will be asked to test the different guild systems, like joining or creating different guilds, and of course their effects on the war system. 'Alliance (AvA).

They then discussed the fight and how it will be brought about. Since E3, the team has been working to make combat Elder Scrolls style with right click which controls attacks and left click which allows blocking. Then there's a hotbar that controls special abilities, but nothing more. The team doesn't want the UI to take precedence over in-game action. Now the team is working on balancing, artificial intelligence of NPCs, and synergy between skills that NPCs and players can. use to ally. A player can drop an oil slick, for example, that a magician can ignite. NPCs can do that too, but now the team is making sure that those synergies are as varied and realistic as possible so that in-game combat is exciting and responsive.

They went on to talk about the progression model that has come a long way since the studio visit in October. They have worked very hard to ensure that every player can build the character of their dreams. Once you reach level 50, you will only have accomplished about 1/3 of the way to fully develop your character. At a high level, the game allows you to broaden your horizon and develop laterally: diversify your character and make him capable of handling all situations and all enemies. The "Achievers" (Bartle test) will love this game!

When it comes to guilds, Paul says they aim to make sure they're connected as much as possible and give players a place to live in the world. So, you will want to help your guild, represent it, and participate in the Alliance war effort in Cyrodiil even if you are not a PvP fan. You will be able to join multiple guilds. Without giving further details, Paul assures that there will be many functions in place to ensure that it remains an inclusive and non-exclusive feature (sacrificing one guild for the other guild). When I asked him if players from different Alliances (factions) in TESO would be able to join the same guild, he replied that it was a good question and wait and see ... interesting, right?

Finally, the discussion revolved around crafts. Paul wanted to make sure we were aware that crafting would be of vital importance, both to the economy and to the players. The equipment obtained through crafting will be as valid as the equipment obtained through quests, dungeons, etc ... Paul suggested that the players who will be best equipped will be those who participate in all aspects of the game. They want people to be able to play the way they like, and if that means crafting is their primary way to get items, then so be it. If they don't care about craftsmanship, that's fine too. But nonetheless, crafting will be a vivid, detailed part of the overall game economy, and it won't be the same type of crafting we've grown used to finding in recent MMOs. The key element will be that craftsmen will need adventurers to get the equipment they need, a craftsman can also try to get it on their own in different places around the world. It is an interdependence that requires players to work together on certain points.

Paul concludes by stating that small groups of beta testers will be starting very soon and you will most likely see some proud posts on the forum stating "I am in the TESO beta and that's all I can say because of the NDA ". In conclusion, Paul thanks everyone for the attention and indicates that if you go into the beta, please feel free to be as frank and honest as possible in the reviews and concerns as they want to make the best game possible and that this is not possible without the help of the testers.

Paul concludes that he would like us to be very honest and sincere about the content they present to us in order to improve it as much as possible. They want this game to be exploited in its every corner and offer the best of the best for players.

What do you think of what we know about TESO so far? Are you registered? Or are you just waiting to see what the game has to offer?

Add a comment from ESO - Live summary with Paul Sage