I introduce myself: White, former player of Star Wars The Old Republic, since 2014 but disappointed over the years, I decided to end my subscription and the adventure on this game. Being a fan of science fiction universes and liking them MMO, I started looking for a new game, to have fun without any real constraints in itself. Not being a follower of the somewhat fantastic universes of type FFXIV, So I had almost no choice and that's when I discovered by chance EVE Online.

This is a MMO which takes place exclusively in space in a futuristic setting from a long time ago. We play a pilot called a capsulier who will start with a tutorial to teach you the basics of this game and after a few minutes, you are ready to start the crazy adventure EVE Online.

"Players create empires there, run markets there ... You have limitless means at your fingertips to embark on your own sci-fi adventure. Conspire with thousands of other players to bring down the galaxy, or do so. Go it alone and find your way in the gigantic universe of EVE. Practice collecting, mining, manufacturing or market economy. Take a path that inspires you in this universe of limitless opportunity. The possibilities are endless in EVE Online. " 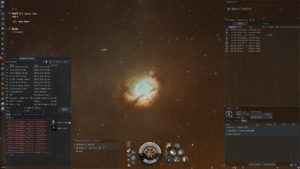 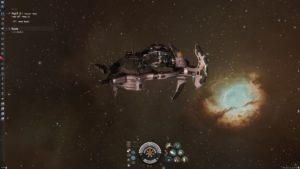 Here is a station in the Amarr space 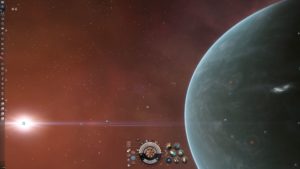 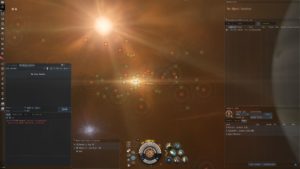 Indeed the game being a real sandbox, the endless possibilities are not empty words. You want to be an industrialist (production / sales), a trader, a miner, an explorer, a transporter or a pure PvP player, well it's up to you and the game will not interfere with your development. You can choose to specialize to be more efficient and have a comparative advantage, or you can do a little bit of everything if you wish.

The game is divided into 4 parts if I may say so. There is HS (High Security) which corresponds to the empire / faction space where we do not fear much but otherwise what we can find there is not very profitable. Then there is the LS (Low Security) where it becomes a little more dangerous but suddenly it starts to become interesting in terms of the loot. And finally the NS (Null Security) where there is the Wild West but suddenly we find things in an abundant and precious way. And finally we have the WH (Wormhole) which looks like the NS with the difference that all the other places are on the star map and we can therefore access it through roads while the WH can be found thanks to specific equipment. But I will come back to each part more precisely in a dedicated article shortly.

Eve Online is based on a skills system which is based on IRL (In Real Time) and not IG (In Game) time. Let me explain: to be able to do this or that activity you need skills such as piloting a certain type of vessel or being able to equip a module on the vessel in question. As a result, you launch your skill at level 1 via a highly intuitive interface, which at the start will only take a few tens of minutes. The more you want to go towards the maximum level of the skill which is characterized by level 5, the more time you will spend, ie several days or weeks for certain skills. But I would do an article dedicated to the basic and advanced elements of the game. 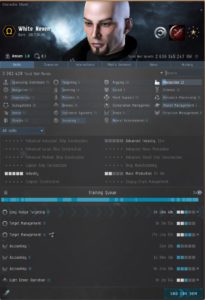 There is a subscription system for people wishing to have unlimited access to Eve Online and you therefore pass from player Alpha (not subscribed) to player Omega (subscriber). 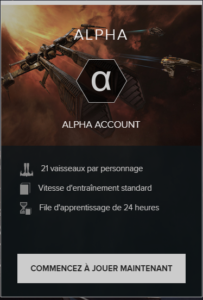 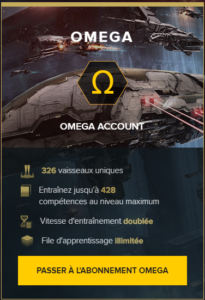 While being Alpha You have access to 21 ships of the same race of your character, a standard skill learning speed and a 24 hour learning queue.

En passant Omega you have access to 326 unique ships with no race restrictions, train up to 428 skills at maximum level with training speed doubled and has a learning queue unlimited.

So either you are on the game in Alpha but not unlimited or you pass Omega and have unlimited access to the game. But I want to clarify that at the level of the content of the game there is no difference in itself but it is more your efficiency in exploring this content that improves. Indeed, by being Alpha you will be able to mine asteroid belts, make production, transport goods, do fights and so on like an Omega but the only difference is that you can do it in such a way. more profitable as an Omega, efficient, with better adapted ships and more efficient equipment.

Several options are available to you :

This makes him a real FTP (Free To Play) as it is hardly done nowadays. Moral of the story: there are people who don't want to take time out of their connection schedule to make SEK so they use their bank card to buy the PLEX and resell it to players who spend more time on the game or who have taken the trouble to take an interest in how to make money in the game. Suddenly everyone finds their account and that fact that the community is huge on this game. 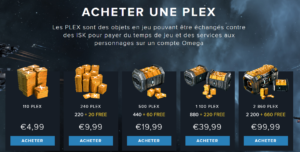 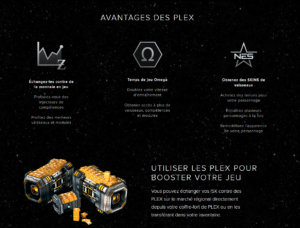 The community at the heart of the game

You will understand, the game is managed by the players exclusively and the intervention of the game itself is almost non-existent to the delight of these players. Moreover, CCP's communication is regular and complete in terms of information. This game has fast customer service, listens to its players and they are very skilled.

The most important too: the programmers and the development team also play their game which makes the difference and it shows in the quality on all points.

Moreover, some players present themselves at the vote of the other members of the community of Eve Online to represent us in a CSM (Concil of Stellar Management). During this mandate, they allow the teams of the game to work on what the players expect and to influence certain decisions in a certain proportion.

In this game it is not the developers against the players by imposing a vision that would not be shared but it is indeed the two who work hand in hand to make EVE Online what it is today and to decide on us. - even of what we want it to become tomorrow.

This game is an investment in time and not for impatient people. But frankly I recommend it to you without any hesitation because it is a complete and complex game to the delight of these players.

If you liked this article, feel free to leave constructive comments and I will provide more because there is plenty to do without limit.

By the way, here is my referral link, which entitles you to 250 skill points not allocated to your account. Please note that you must click on this link even before registering for the game, it is very important.

Have you played EVE Online before? Or maybe you will do it?


Do you want to be up to date and know all the tricks for your video games? In gamesmanagers.com we enjoy playing as much as you do and for that reason we offer you the best tricks, secrets or tips for you to play non-stop. We offer you quality content and always updated to keep you up to date. That's why, in our website, you will find not only videogame guides but also tricks, secrets and thousands of tips so you can play to the limit. Are you ready to get it? Enter now and enjoy your videogame!
Skyforge – Previously, dans Skyforge – 17/10 ❯