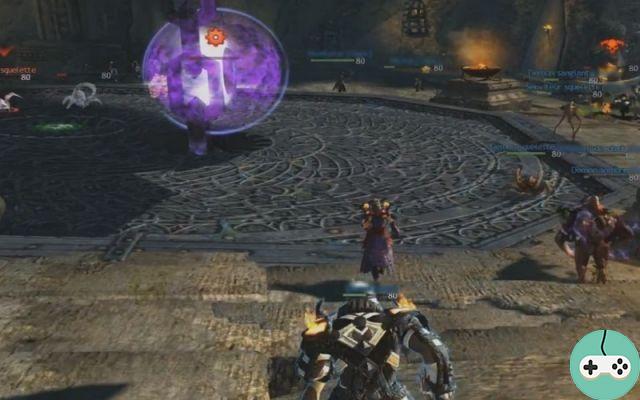 Flank Cliff is one of the 9 Fractals present in the new dungeon Mist Fractals. 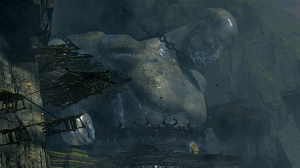 You will have to free the colossus held captive against the cliff.

The rest of the article will explain point by point how to succeed in this dungeon. 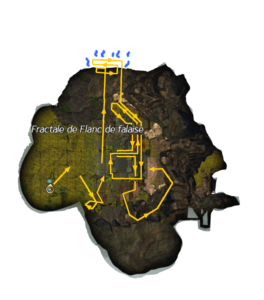 You obviously start at the bottom of the cliff and you will have to climb very high in order to complete the Fractal, good luck!

A legendary Archdevin is already waiting for you for the fight, make him understand that you did not come for nothing. Watch out for its death wells which do heavy damage. Once he's dead, a player on your team will need to retrieve the hammer he drops. You're going to need it to free the Colossus.

If I had a hammer ... I would free the colossi!

By releasing the hammer, the player stops accumulating stacks, and begins to lose some. To destroy a seal, you will therefore have to use the hammer without suffering its harmful effects. Spin it between you?

Start to climb the cliff by carrying the hammer. From a certain level of difficulty, enemies will block your way during this ascent. There are also traps along the way, which will hurt you and slow you down. Arrived on the platform of the ankles, it is enough simply to charge the hammer and to strike twice each of the seals to destroy them. This done, begin to climb to the next seal.

The seal of the chest

Your ascent will be blocked by statues sending blasts of air in your direction. Passing through them will cause you to fall, and if you carried the hammer, your team will have to start the ascent again. Stability

is therefore a very good solution for this passage!

At the top, you will have to cross a small series of traps again before arriving in front of the seal of the chest. Here it will be necessary to avoid fire traps while killing enemies with the hammer in order to destroy the seal.

This done, direction the two seals of the arms!

The seals of the arms

Simply climb onto the different platforms without falling into the void. You will come to one of the two seals. Here, it is only possible to strike one seal at a time, the other remaining inaccessible because a shield protects it. The principle here is to take turns quickly enough to kill an enemy, attack the seal, and go to the next to attack it in the same way. If no one ever attacks enemies in front of a seal, they start to make him regain his energy. Speed ​​is therefore essential for this passage. It is possible to let a person occupy the enemies so that they avoid regenerating the seal, however it becomes much more difficult at high level.

With the two seals destroyed, you can finally ascend to the last seal.

You will have to finish your ascent on boards that are subjected to small explosions. If you pass over one of these explosions you will be thrown into the void, stability again

Proceed with caution, and climb to the top. You will eventually come to the last seal, guarded by a Legendary archdevin. The latter will steal the hammer from you. For this last seal, you will have to force the boss to drop the hammer (all its 25% of life) in order to steal it and strike the seal. After each hit, the boss collects the hammer again.

The seal destroyed, the colossus is fully freed ... Thanks to you!

After turning around to thank you, he disappears into an unknown world; don't forget to greet him with an emote / reverence

Here is the exploration of Flanc de Falaise:

Each time you level up, the difficulty increases and the rewards are better. So you will earn more Fractal Relics and more items!

Relics of Fractals rewards according to the difficulty chosen

There will also be some changes depending on your difficulty level:

Obviously, equipment drops all the way through your dungeons?

Thank you for reading me and I tell you very soon for new guides!

Feel free to send me your own version or images of the Cliffside, that would make us very happy and other players could also enjoy it?
Also if you feel like writing for gw2-guide, the procedure can be found here!

Inspired by Artificial Wave, spanish Wikipedia GW2 and my experiences.

SWTOR - On the Road to KotFE: The Sith Warrior