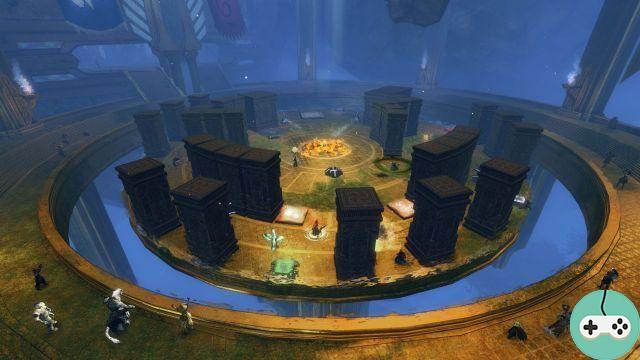 Last week, we had the right to livestreams on the guild halls. On top of that, ArenaNet gave us a ticket detailing the Guild Hall arenas. Here is a summary. 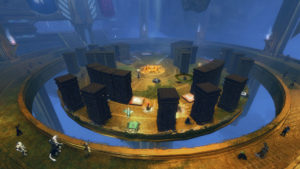 After the restoration of your hall, you will meet a human, Castor Criad, with whom you can rebuild the ruins that will make up your arena. Once the construction is finished, you will be able to return thanks to an NPC representing one of the two teams (red or blue). By developing your arena, you will be able to add new specificities such as:

For this last point, the solution that will remain will be to bring your enemies out of the ring. Basically, this is between the bleachers and the arena, but since you can design your own arena, that can change. Regarding the personalization of the arena, it is planned to be able to add fear-provoking turrets or pillars. Thing to know: Arena obstacles can even be added / removed during a raging match.

HoT being an extension where the community will be strong, it will be possible to invite other people outside your guild. For this, the player will have to be part of your group. If too many players are present in your lobby, a new, larger map will be created and you will have to change it to join your friends. If you are playing a match, then wait before you start it. Many upgrades will be available in your lobby to customize your arena, whether it's decorations or size.