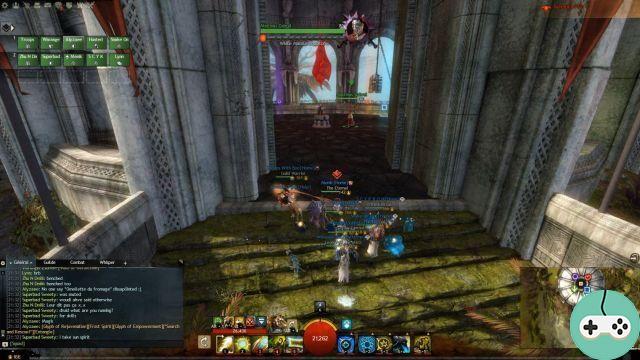 Matthias Gabrel is the last boss of the Passage de la Rédemption. Inquisitor of the Order of the White Mantle, he played with the Bloodstones to gain powerful powers. Find in this guide the different mechanics of Matthias as well as the ways to manage them. 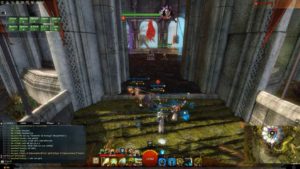 Preparing for the fight

First of all, you should know that Matthias has around 26 million HP and that he becomes enraged after 10 minutes. We can notice that it is of the same size as the Paressor in terms of time / health (it is not a DPS boss but a survival boss). Raid Mastery is important in combat as it allows you to avoid stun for 3 seconds after going through a fountain due to corruption (damage gain over the long term).

The human phase is broken down into 4 main parts:

Matthias will perform a frequent jump in the air which, when he comes back to the ground, launches a burst of bloodshed in 360 °. Each shard deals 3.5K damage to players but grants a 10% temporary damage bonus. Be careful not to think about this attack because if the shard hits the boss, he will gain the bonus. Invincibility and blocking spells absorb this skill and gain the bonus. 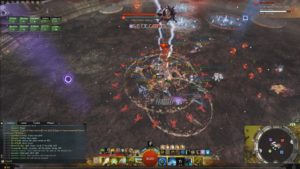 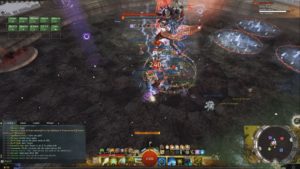 The Blood Shield (also called Bubble) spawns around Matthias, making him invulnerable to damage. To destroy this shield, you will have to reflect his blood shards attack channeled by his staff (online attack). You will need 18 Reflected Shards to destroy it. The skills that destroy projectiles do not work and can therefore slow down the process. 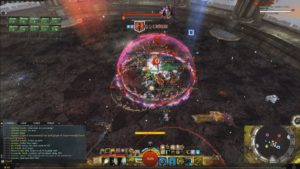 Corruption is a curse that appears at 9.55 with a 30 second CD (.55 and .25). It will target a random person in the group with a curse visible by two dots: a skull above them and an orange area at their feet. This area will inflict 4K damage to anyone in it (including carrier).

To dispel it, you will have to go to one of the 4 fountains on the map at the inter-cardinal points (SW, NO, NE, SE). The fountains will have two colors: red when they have been used and transparent when they are not. Each fountain has an internal CD to switch from red to transparent for 90 seconds. If you don't have Raid Mastery 3, you will be stunned for 3 seconds after your cleanse. 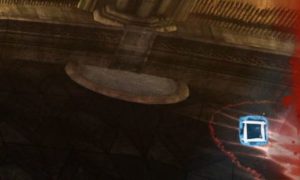 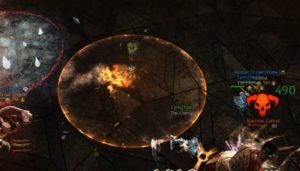 From 9.45 and every 45 seconds, a player will be placed on the sacrifice altar (center of the arena). He will become hostile to the whole group, will have a defiance bar and an increase in his HPs in proportion to his HPs before transformation (100K at 100% health, 80K at 80%, ...).

The defiance bar must be destroyed within 10 seconds after the transformation, otherwise the player will die instantly (no knockdown). It will also be necessary to be careful that the player does not die from the damage of the group during the transformation because he will suffer the same wrath as if the bar is not destroyed. 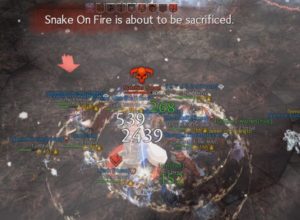 The room will end up in a giant snowstorm where players will receive 2K damage every 3 seconds as well as Frost Alteration (reduced movement and spell recovery speed) every 10 seconds. Frost is important to take into account because it will have a direct impact on players suffering from corruption (not enough time to go purify themselves) as well as on players who need to reflect the shards of blood on the shield phase.

Ice zones appear randomly in the combat zone. If a player finds himself in one of them, he will be knocked down for a short time and will be decked out with the frost damage. They can be destroyed mainly by fire spells or inflicting burns. Elementalists as well as the Druid's Sun Spirit are welcome. 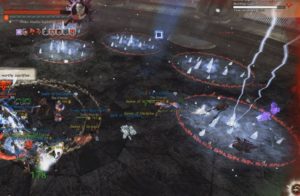 The Charged Attack, also known as Hadoken by a large majority of the community, is a spell that Matthias casts after the Blood Shards attack (Blood Shield mechanic). The animation of the attack is pretty straightforward to see as he twirls his staff before throwing the devastating ball. This ball, if it hits you without having an invulnerability or blocking spell, will knock you down.

To avoid it, as soon as it does its animation, you can place yourself behind its back or on its sides so as not to take any damage. It is quite possible if you are at a distance (returning from a fountain for example) to dodge with your associated key. 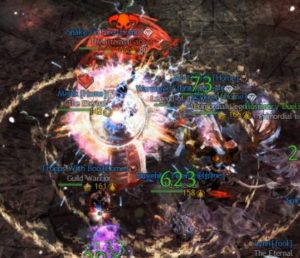 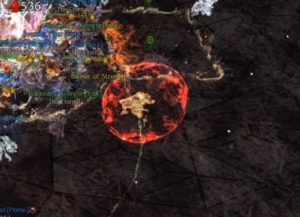 The area will turn into a blazing inferno and inflict 3 burning charges every 10 seconds to all players present. You will also need to remember to move throughout this phase so as not to take periodic damage (similar to the end boss of the volcanic fractal).

Two fire tornadoes will appear randomly in the room, they cannot be destroyed and will drag you into their movement if they hit you. The orange circle appears to be smaller than their pull, so be careful about your placement on this phase. If you get caught in one of them, you shouldn't die of it, unless they drag you into a desecrated area, for example. 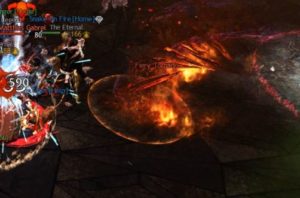 The desecrated area targets a player with a curse (similar to the Paressor) every 10 seconds. That player will have 10 seconds to use their special action to drop a desecrated area at their feet that will deal damage to anyone entering it. The best solution is to free your areas near the walls of the room but without covering the purification fountains. 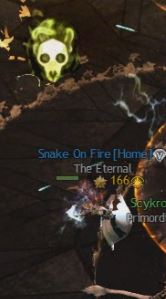 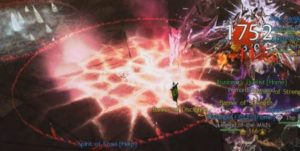 During this phase, as soon as you move, you will gain a Storm Hex charge. When you reach 10 stacks, it will transform into a new hex that will stun you the next time you move (reset hexes). The solution is to not move for a few seconds with the new spell because it disappears after a while. Dodge and movement spells (Spell # 3 of the Druid with a Staff for example) do not count towards the gain of Hex.

Like the other phases, the passive effect of this phase is that your party will take 5 poison stacks every 10 seconds. So remember to stay together to remove them quickly.

The poison cloud is present throughout the area and is circling in the middle of the area. Besides the damage and poison charges it will inflict on you if you pass through it, it will mostly increase your Storm Hex charges, which could result in unwanted stun. 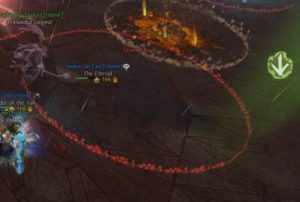 Similar to Sabetha, 5 players will receive Time Bombs. You will have to move away from each other quickly to avoid taking too much damage. In addition, it is possible that the zones overlap as long as the players are not. Be careful not to make unnecessary movements to avoid taking hex charges. 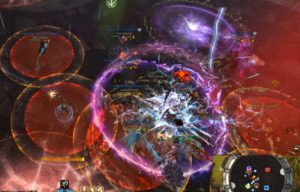 First of all, you should know that Matthias will no longer use his sacrifice mechanic until his death. Different mechanics of the human phase will be changed and a new mechanic will be added:

During the Abomination phase, the Ice / Fire / Storm cycles will follow each other every 30 seconds. You will have to pay attention to your investments as well as the stopwatch to avoid being caught off guard. However, some changes should be noted:

The mechanics of the bursts of rage (360 ° salvo) have undergone a change: when the boss performs his jump, he will only launch shards throughout the room (represented by areas on the ground). Pay attention to your feet! 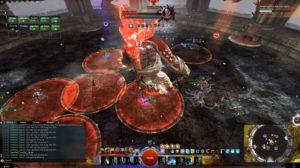 Charged attacks and bombs will no longer be tied to their elemental phases (Ice and Storm). Charged attacks will be more frequent than during the human phase. For the bombs, they will target all players in the group. Pay close attention to this last point for the thunderstorm phase which can be very complicated to manage.

The boss's new mechanic will be to spawn a ghostly spirit regularly which will cross the room in a straight line and then disappear. They do great damage to players entering their contact zone (~ 5K damage / sec). Since spirits are quite slow in their movements, this mechanic is fairly easy to avoid as long as the group is moving in one go. 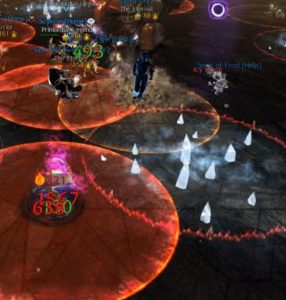 Do you want to be up to date and know all the tricks for your video games? In gamesmanagers.com we enjoy playing as much as you do and for that reason we offer you the best tricks, secrets or tips for you to play non-stop. We offer you quality content and always updated to keep you up to date. That's why, in our website, you will find not only videogame guides but also tricks, secrets and thousands of tips so you can play to the limit. Are you ready to get it? Enter now and enjoy your videogame!
GW2 - Recipes: Evon / Ellen ❯