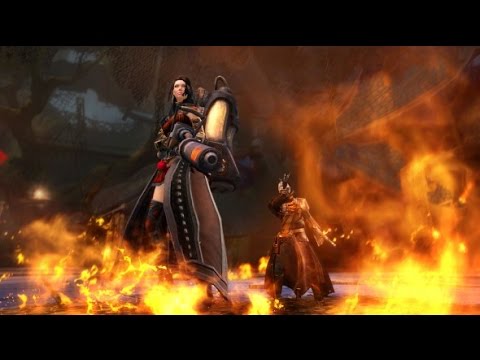 This time we tackle the last boss of the valley of the spirit namely Sabetha. She is the leader of the bandits who are in the raid wing.

Preparing for the fight

As in the whole raid, there are no optimal group compositions, however certain professions have more ease on certain facets of the fight or are recommended to bring a certain stability to your group (both in healing and in damage):

You should know that to fight Sabetha you must have learned the second raid mastery "Projection explosive". Without it, you will take heavy damage (around 3 / 4K) if you are targeted by the green bombs. In addition, to launch them you will need to configure the key to the special attack. 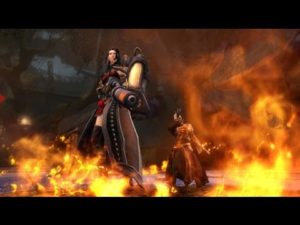 The mechanics of combat

Unlike the first two, you will not only fight Sabetha during the fight. At each 25% health, Sabetha disappears leaving one of her lieutenants to take her place. We distinguish during the fight 3 families of mechanics namely

The next mechanics will take place throughout the fight except for the time bombs (not present during the inter-phases) and falling debris (last phase only).

It is the most difficult mechanic to assimilate during this fight because it integrates several players at the same time as well as a reduced reaction time.

The Sabetha arena has 4 flight platforms at the cardinal points (North, South, East, West). They will take you to the cannons that must be deactivated so that they do not damage the boss arena. The guns each have 75K HP. To activate these platforms, a player will have to stand on them and the one with a green bomb on them will have to throw it at the other player. The person being ejected cannot be ejected for 50 seconds. On paper it's quite simple but you need to know several things:

Order of appearance of cannons 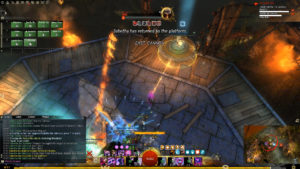 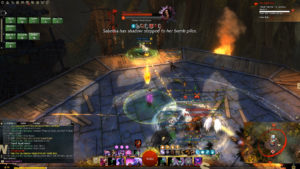 Bandits are Sabetha's minions and will appear throughout the fight. There are 3 types of bandits each with their own abilities.

To avoid taking unnecessary damage and since Sabetha is not moving, players can try to bring them to the center to kill them (the Time Curtain of the Chronomancer is very useful). 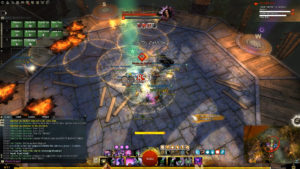 Time bombs do not spawn during inter-phases.

The player closest to Sabetha will have the bomb on him. He will have to move away from the group because the bomb only inflicts heavy damage on non-carriers. The wearer is indicated by a bomb icon above their head as well as a large red circle representing the bomb countdown (full area = explosion)

Falling debris is only present during the last phase.

Represented by orange circles (not to be confused with cannons), they inflict heavy damage on players who have stayed in them. The zones are easily avoided by the players. 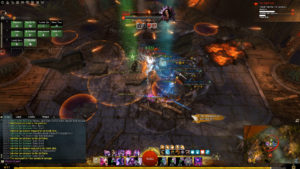 As you can imagine, Sabetha will not be let down during the fight. She has 3 abilities, one of which is only during inter-phases.

This is Sabetha's "One Shot" attack. She will ignite her flamethrower on a random player (will be marked with an arrow) After a few seconds, the flamethrower activates and Sabetha spins it a full turn counterclockwise.

This attack cannot be blocked or dodged (even in the air). The only ways to avoid it are to circle the boss or use teleportation spells (Flash Lightning and Blink for example). There are three other things to know about the flamethrower: 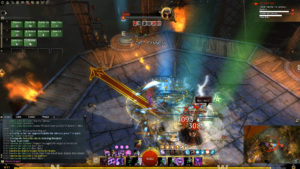 Rain of Fire targets the person farthest from Sabetha every 7 seconds and will leave areas of fire on the ground that will remain there for 25 seconds. Puddles inflict burning charges for as long as you stay in them. Since the projectiles are quite slow, they are easily dodged by the targeted person.

The person in charge of this task should be placed at a distance while avoiding standing in front of the launch pad to avoid disturbing the people in the group. 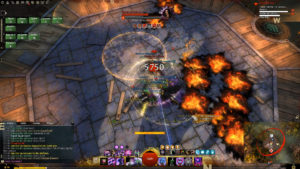 Mechanics only present during inter-phases.

Heavy bombs are sent by Sabetha when a lieutenant is alone in the arena. They explode after 10 seconds inflicting heavy damage to your group but especially to the platform. To eject this bomb, you will simply have to press your action key (F by default). The bomb automatically ejects from the combat zone without doing damage. 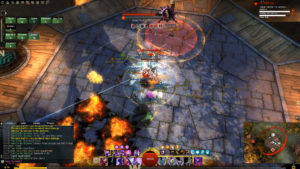 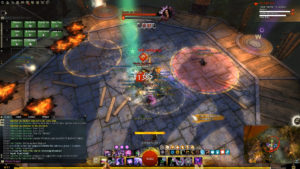 The capacities of Lieutenants

Lieutenants always appear every 25% and in the same order. Each of the lieutenants has a different strategy to adopt:

Kernan attacks with 2 pistols targeting a random person. Its special cone attack is performed by 3 consecutive bursts with a larger area each time (15 °, 30 ° and 45 °). The third volley inflicts heavy damage to those hit.

Be aware that Kernan doesn't move during his special attack, so it's easy to avoid him by quickly getting behind his back when the first cone appears. 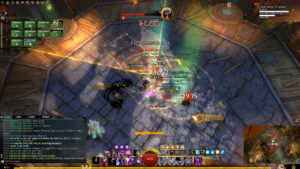 Lieutenant melee using a hammer. Equipped with a defiance bar when its hammer rises, if it is not broken in time your entire group will be thrown into the air and thrown back. In some cases, this can be fatal.

Be careful, when Sabetha returns, Mornifle can recover a defiance bar. You have to be very vigilant because Sabetha's flamethrower does not forgive. 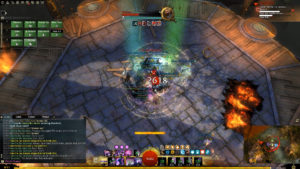 The last lieutenant, Karde, uses a conical zone flamethrower in front of him. To avoid it, your group will have to always be behind its back. It will spawn fire turrets every 20 seconds that will launch projectiles all over the place.

The goal of your party will be to destroy Karde very quickly and watch out for the turrets that deal a lot of damage to your team. 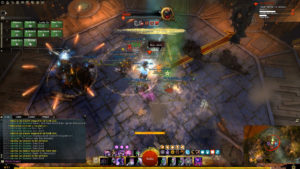 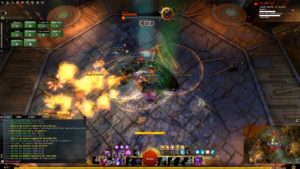 The fight against Sabetha

The fight against Sabetha is actually not that hard compared to Gorseval or the Guardian. The only problem is that the boss's different mechanics leave no room for error. If they are well integrated and executed well, Sabetha should fall easily.

Remember to organize yourself on the following different mechanics:

From the start, the group should stand with their backs to the SOUTH platform to prepare for the first green bomb. As soon as the cannon appears, the player designated before will have to stand on the platform to be ejected on the south cannon. Be careful as Sabetha will perform her first flamethrower in this time frame.

The next placement will be north and this is also when you will see if your party has enough damage for Sabetha. Indeed, the phase change must be done before the North cannon (7min30) is activated. If not, you will squeeze quite short in time.

Upon Kernan's arrival, Sabetha will disappear. It will take you place the opposite of the appearance of platforms to prevent Kernan from sending his special attack on it. Its cone attack inflicts heavy damage especially at the 3rd occurrence. Your party will need to be on the lookout for heavy bombs that will spawn on the platform and deal heavy damage if left unchecked.

The second phase is the same as the first.

Mornifle is a rather complicated lieutenant to manage because you have to destroy his defiance bar fairly quickly otherwise your group will die or be ejected. In the rest, it does not do much damage and is not very binding as a lieutenant. It happens that when Sabetha returns, he regains a bar of mistrust. Be very careful because if you miss each other, the flamethrower will not miss you.

Phase 3 is no different from the first two.

Karde will have to be destroyed quickly as it does appear turrets can destroy your group quickly. You will have to leave 1 or 2 people on the turrets so as not to be invaded. In addition, your group will have to place himself behind his back to avoid his cone flamethrower.

Phase 4 is similar to the others with one major addition which is the appearance of random damage zones. Their approach time being quite slow, it will be very easy for you to avoid them. 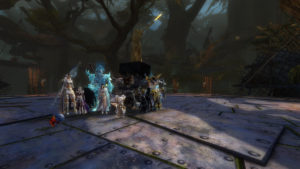 Finally, here is a PoV video of a Cataclyste carrying out the cannons!

ESO - The story of TESO ❯

SWTOR - The Empress vs. the Sith