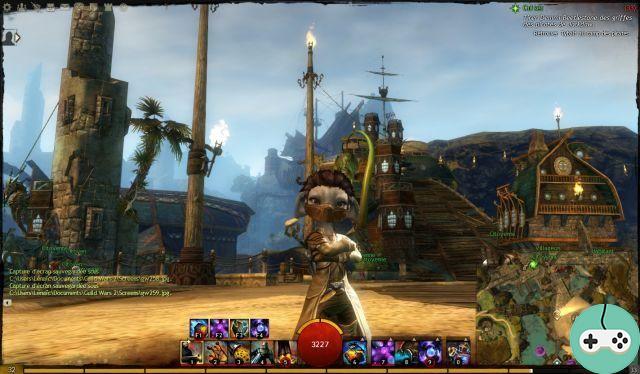 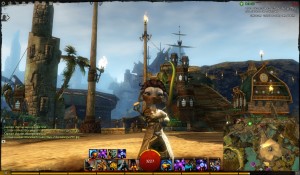 I'm Lenatarrisp, Asura engineer responsible for teaching you all the intricacies of skill bars!

So these little bars we obviously don't eat ... Isn't that the young man over there? These bars are there to ensure your survival so take care and learn your spells well!

First of all, you should know that we get all the locations of the skill bar only at level 30, elite skill level! Your healing spell will be present from the start of your adventure and the 3 other utility slots will be unlocked as you level up: 5, 10 and 20.

These skills are purchased via skill points

that you can find everywhere in Tyria during a few challenges (They will be indicated on your map) or at the rate of 1 point per level gained. 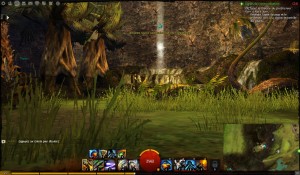 To each his own bar!

Each class has its own skill bar!

: This belongs to the Guardian who has three virtues, Justice, Courage and Determination, with different passive effects. Around the three icons, flames rise as the blows are given to indicate when Justice will inflict his burn. The interface allows the activation of each of the virtues and indicates the current reload times.

: The ranger can here monitor the life of his familiar, give him orders (attack a particular enemy or activate the skill specific to the species of the familiar), define his default behavior (active or passive) or even switch from one familiar to the other among the four chosen beforehand out of combat.

: The mesmer has four additional skills, called illusion burst, which allow him to sacrifice the illusions he has created to obtain different effects: damage, confusion, stun or even a protective barrier that returns projectiles .

: The thief has an initiative gauge of 10 points to activate his weapon skills. In addition, he can steal his enemies to remove an environmental object: this ability is activated thanks to the icon present before the gauge.

: The elementalist can choose to tune with fire, water, air and earth, simply by clicking on the chosen element. There is a minimum time between two changes: 20 seconds for the previously used element, 10 seconds for the others. These times are indicated on the icons. In addition, the elementalist's hands are surrounded by an aura, the color of which depends on the active affinity.

: During the fight, the warrior's adrenaline gauge fills up, increasing the damage he causes. In addition to this passive effect, it is possible to trigger a shattering skill. Depending on the main weapon equipped, it is symbolized by an icon at the end of the gauge. Its effects depend on the number of notches fully filled with adrenaline.

: The necromancer has a vital force gauge which is filled in particular thanks to the death of his enemies. 10 kills are enough to fully charge it. At any time, the necromancer can don his Death Shroud which grants him access to 5 dedicated skills. The vital force then takes the place of health.

: I have a tool belt that allows me to effectively use my healing and utility skills. Each has a specific skill that is automatically equipped in the belt.

We can only equip 10 skills in total, you have to choose them well!

The big red circle in the middle is obviously the life you have and the 2 yellow bars just above represent your stamina. This endurance can be spent by performing a dodge with the movement keys (for example, press the front key twice to roll forward)

Small practical note, As an Asura engineer, I am giving you a little technique that can come in handy if you don't know what to choose in utility skills:

That's it for this tour, show yourself strong, choose your skills wisely, and destroy the dragons of Tyria to naught!