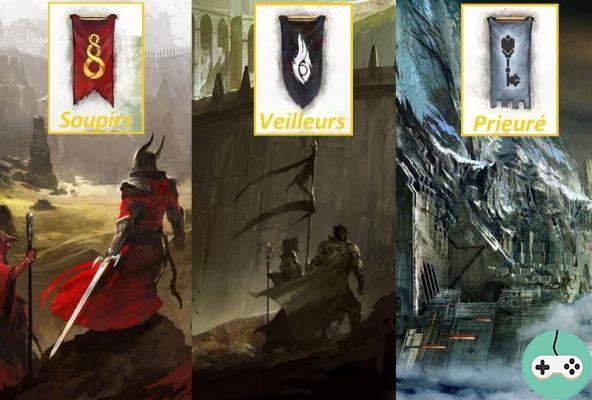 I'm Clayton, well, old Clayton because everyone calls me that now. And yes, I made my little way, I saw a lot of things, fought a lot of monsters and protected our beautiful country Kryta. At 138 years old, it is time for me to give a little of my knowledge to the young people that you are. Yes I look old ... Yes I look old! It was a mage Norn who bewitched me, I am forced to see my father and my children die of old age ... No it's not funny ... But we get used to it, so goes life ... I can still learn something from it and teach you the history of our country! 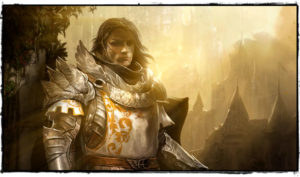 Logan Thackeray is a human guardian and one of the rulers of the Seraphim at Divine Promontory. Clayton greatly appreciates this good man.

* A child asked a question *

The city of Orr ? Well ... it's now lion's arch but once this town was called Orr. It was a wonderful city where life was good.

Things have been changing in Tyria for quite some time and the lands are becoming less welcoming, the lands bloody. This is due to the return of the ancestral dragons: Primordius, Jormag, Zhaitan et Kralkatorrik. For my part I could see Zhaitan... Very closely and even Kralkatorrik. Yes, yes, the famous dragon the cristal woke up in 1320 AE.

This date is also the year of the dissolution of the Blade of Destiny in order to create the Watchers. I am too old to fight unfortunately even if my arm remains agile!

* Quickly take out a thin sword from the inside of his cane and perform a few reels to impress the children ... failing to dislodge his shoulder *

My father was born in 1161 AE. So he lived the awakening of Jormag, the ice dragon... Anyway!

You know why you are in front of me, I owe you present the 3 orders of Tyria :

It is a scientific order dedicated to the protection of knowledge and traditions. Named after the monastery that houses the archives, members of the Priory of Durmand offer their services as counselors, tutors and chroniclers throughout Tyria. They are ready to share their acquired knowledge, but do so with caution so that it can improve all races. I am part of this order. *Big smile*

The Durmand Priory is one of three multi-racial orders that seek ways to combat the Elder Dragons. We are doing our best to help fight the dragons, especially thanks to our gigantic libraries and our knowledge.

One of the major contributions of the Durmand Piety to modern Tyria is the New Krytian alphabet. A single language has not only enabled scholars to tidy up their vast shelves of books and knowledge and to communicate with each other, but has also enabled all races to interact through standardized means of communication. Durmand Priory championed literacy throughout Tyria and now most Tyrians can read. Isn't that wonderful? 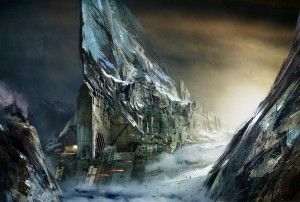 The Watchmen are one of the multi-racial orders that players can join. It was founded by a charr, General Almorra Soulkeeper, shortly after the creation of the Dragon Stigma. It is a military force that fights the Elder Dragons. They are known to have a base at Lion's Arch as well as having their main base at the Citadel of the Watchers, located in the Shiverpeaks. The Watchers believe that the only way to defeat the Elder Dragons is to unite the races of Tyria.

The Vigil is a powerful community of individuals bound by an oath to stand up for those in need, to fight the darkness, and to offer help to those who cannot help themselves. Wherever the Elder Dragons have sent their minions, the Watchers face them and oppose their spread. The Watchers want to face the enemy directly, testing Zhaitan's powers in the hope that these methods can one day be used against the dragon himself. They believe that the Elder Dragons are getting more powerful with each passing day, and that those who are not fighting now are pushing the world even deeper, passively standing aside. Those who do not like the methods of the Watchers call them idealists, but they are not naive. These Crusaders understand that the world is a dangerous place. They intend to be an army of light against the onslaught of darkness. 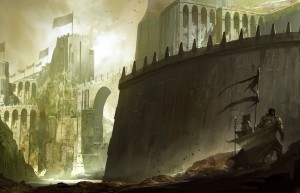 The Order of Sighs

L'Order of Sighs is one of three multi-racial orders that players can join. This order originates from Elona, ​​and was founded by War Marshal Turai Ossa as an elite secret organization. They have been working from the shadows since their inception, sending members throughout Tyria. Originally, they worked to contain the threat of demons and titans, as well as to keep the undead lord Palawa Joko prisoner. Since the awakening of the Ancestral Dragons, they also fight against this new threat. Finally, since Palawa Joko took control of Elona, ​​they are also the only ones able to communicate between this continent and Tyria.

The Order of Sighs has a very different approach to fighting dragons from the other two orders, preferring to resort to infiltration and intelligence gathering through espionage. They believe that the dragons cannot be definitively defeated but can, and should, be put back to sleep.

Formed by War Marshal Turai Ossa's close guard on Elona after the fall of Palawa Joko, the Order was tasked with keeping the undead lord locked under the sands of Elona for eternity. In 1075 AE, however, the Order was forced to let him escape in order to aid in the defeat of Varesh Ossa and his master, the fallen god Abbadon. They aided, alongside the Forgotten and the Sun Spearmen, in Kormir's ascension to the rank of goddess and to keep the Realm of Torment far from the surface.

Joko has since won back Elona. Despite this, the Order has grown beyond the latter's borders, gradually increasing its ranks. It is the only order outside of the Dwarves to have had any knowledge of the Elder Dragons before they awoke. They tried to disseminate this knowledge, but were ignored by all or almost. When Zhaitan emerged from the waters, the Order of Sighs assisted in the protection and evacuation of the Lion's Arch archives, entrusting them to the Priory of Durmand. 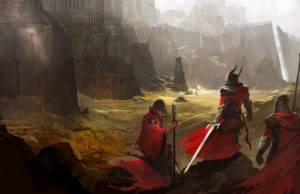 I'm starting to tire me ... I must leave the children to you now.

Hope you will understand the importance of these 3 orders. They are complementary and must unite at all costs to repel the great threats of this world, the greatest threats in the history of Tyria!

If you are intelligent, clever, strong ... You may be contacted by one of these 3 orders. It's an incredible chance, take the opportunity to help us kick the dragons out of our lands!

You will also find cultural armor related to these orders, do not hesitate to wear it to look great! ? 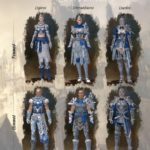 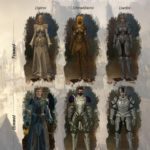 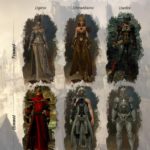 Do you want to be up to date and know all the tricks for your video games? In gamesmanagers.com we enjoy playing as much as you do and for that reason we offer you the best tricks, secrets or tips for you to play non-stop. We offer you quality content and always updated to keep you up to date. That's why, in our website, you will find not only videogame guides but also tricks, secrets and thousands of tips so you can play to the limit. Are you ready to get it? Enter now and enjoy your videogame!
HearthStone - Innkeeper's Journal, Part 2 ❯

Fragments of Him – Aperçu

Add a comment from GW2 - The 3 Orders of Tyria