After a very nice first part, the innkeeper of HeartStone reveals the second part of his diary. Obviously, the texts will keep the same length when presented in the form of short stories.

Goblin friends, explosives enthusiasts, this part of the journal should surely interest you:

At the Inn, Hearthstone games can really get the crowds going! But I always manage to find a privileged and comfortable place for everyone to attend the games. Well, sometimes when there are tauren or draenei, I have to place them at the back of the room so that they don't interfere with the others. Sorry folks, but not everyone is as tall as you!

Speaking of the roaring crowd, I remember a really heated Hearthstone game the other day in a corner of the inn. The crowd was shouting, laughing and shouting at the same time, but everyone was taking great care to stay away from the table itself. It was really strange!

People were watching the game of two goblins, fully focused on their Hearthstone game board, using sticks of dynamite instead of wicks to time their turns! As I did not particularly want to have a new open-air room in this part of the hostel, I strongly suggested that they continue this dangerous activity outside. The goblins then settled outside and continued their game while the customers watched them from inside through the windows.

After a while one round ended up taking too long, and the goblin on the wrong side of the stick of dynamite exploded, I had never seen that! But he's fine, don't worry. He seemed especially berserk at having lost! I'm sure he'll be back tomorrow. 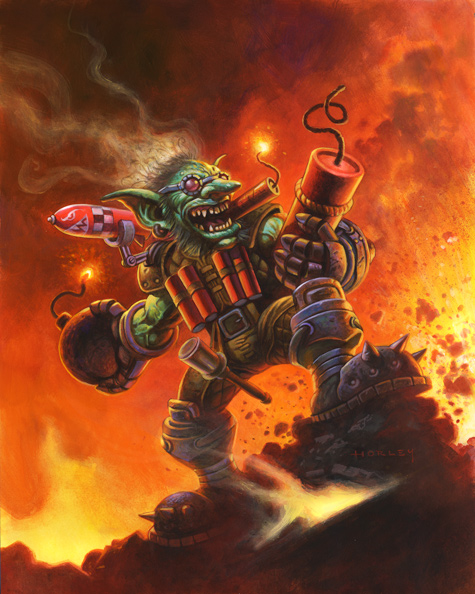 These dear creatures eager for gold coins therefore have a way of playing of their own but which can do damage!

See you soon for the rest of Pierre Defoyer's diary!