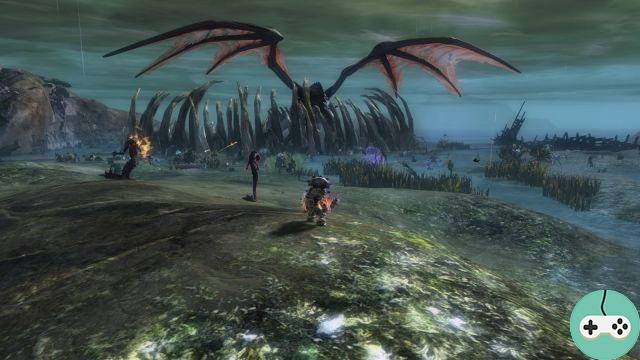 Last night, Eric - A visitor to Gw2-guide - contacted me about the article News, Tips, Community # 16 that we recently released. Appreciating the writing, he therefore offered me a really well done text and I therefore wanted to share it with you!

His character is therefore highlighted and tells us about his latest adventures, especially with the arrival of Tequatl.

Do not hesitate to contact us if you also have things to offer us?

Go to the Marais de Lumilulle, to fight Tequatl the Sunless. Certainly, and then what else? I was quietly installed on the terrace at Lion's Arch when I saw the emissaries putting up the posters. And from L'Arche, the marshes are far to the south, in a notoriously inhospitable region. Tequatl, a good number of warriors have already crossed paths with him because he has already made forays into the region. So it was not new. And the Asura arcanists regularly pushed him away when he pointed the tip of his nose. What could have worried all of Tyria if such an insignificant adversary demanded the participation of all?

Curiosity had won the day, and like many others, I took the road to the South. Of course, I had been there before, but it was a long time ago and to be honest, I had only stayed there long enough to validate my knowledge of the region. The Luminulle marshes, especially in the south, are a gigantic rainy quagmire. Twilight forces abound here, and their minions lurk everywhere, from the deepest water hole to the tops of the few poor hills around. The inhabitants live in tiny communities, mainly because they were sent here against their will. Asura researchers grumble against the odor and instability of the soil, the Sylvari are there to fight evil, and a small community of humans is carrying out archaeological research further north. For me who am Norn, there isn't a pint of beer for miles around. No mountain, no snow, no Dolyak stew. And for the second time that I set foot there, I had made the same thought: I had nothing to do in this rat hole.

On the south coast of the Marais, which borders the sea, adventurers of the five races now rubbed shoulders. The promised rewards for once again slaying the dragon defied common sense, so there were many contenders for the winnings. And yet when I arrived there, we were evacuating the wounded by the dozen. "No need to try, he has become too strong" one of them told me. "If he comes back, protect the turrets," another dying whispered to me. Well, had the few summer months spent sipping liquors in Zephyrite palaces, enjoying the Queen's Jubilee banquet had us so soggy? Hell, many of us had gone to challenge the dragons until the dead of twilight in the ancient city of Arah! I was among them, I fought and like all Norn, I came back without whining about my injuries. Others on the spot thought like me, and all together we galvanized: Tequatl would fall, and under our blows certainly.

The asura had planned his arrival with a few makeshift installations: modified hylek turrets and their famous "Mega-Laser", a typical asura weapon that is usually only ready when the fight is drawing to a close. To prepare for battle, I met several other adventurers. It quickly emerged that my usual gear, more suited to rapid assassination and stealth, would not have much interest in combat. That's why I volunteered to defend the turrets to the east. The flank is exposed, because when the Dragon makes its appearance, the minions of darkness come out of the water and walk on the tusks with their master. Cowards, they would see what a Tokren is capable of. I have already cut my quota, and without complaining.


Suddenly, an abysmal silence fell over the entire region. A shiver ran through my spine, and I pulled up my heavy leather jacket. Bear, I whispered, protect me. Looking up, I saw the brackish water of the Marais rise in a gigantic wave, from which the beast emerges. Was it an illusion or did he look bigger than the other dragons? When Tequatl finally flew to our beach, I heard more whispers from the other fighters. The excitement of the moment was shared with a fear, an anguish inherited from a distant past where dragon was synonymous with death. By the Gods, it was gigantic! The earth shook under our feet when its talons, taller than a man, were planted in the sand. Tequatl is beyond imagination, like Jormag's signature, on display in the Great Hall of Hoelbrak. I fought Jormag, I'm proud to say he knocked me down a few times before we and other Norn friends fought him away.

But there, the fight was uneven. 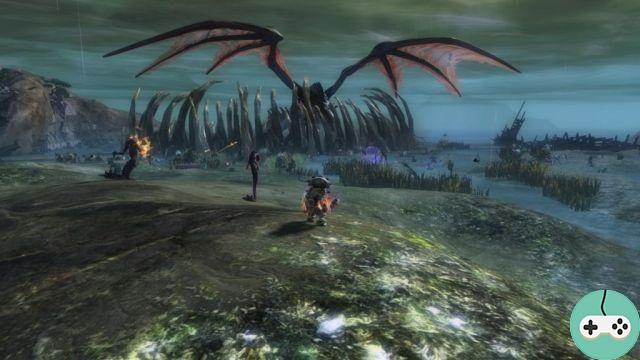 The dragon swept away the fighters like so much straw. Protected by an enhanced panoply of protective spells, the best defenses armor and potions can provide, grouped together like a strong cluster, like a deadly spear aimed at the dragon's heart, the fighters would die. And they would die by the dozen. When Tequatl hit the ground with its front paws, it was not uncommon to see the swamp rise, and a wave sweeping men and women towards the ground. He spat out a terribly corrosive poison, which he poured in whole bags over the whole area ... And if that wasn't enough, a single rumbling was sometimes enough to instill an artificial fear that made the men retreat tens of meters.


Dazed like many others, I watched the beast take pleasure in tearing our ranks open. Almost to the point of forgetting the legions of the dead, who rose up in the mud to take part in the fight. They took it wrong, because in my joy at not being caught between the clutches of the monster, I gave myself to heart to protect the turrets. On the

battlefield, panic was winning. The fighters spent more time trying to avoid the blows than actually injuring the gigantic dragon. And then, a turret ended up giving it a spear, which crossed its heavy shell and remained frozen. The dragon howled in pain, then fell back on its paws. Of course, it wasn't such a trivial injury that could stop it, but it had an extraordinary effect on my comrades and the dozens of men and women on the ground in front of Tequatl. The dragon could be hit, he could be hurt. And if he could be hurt, then we could push him away. And maybe even kill him.

Despite all this goodwill, the wounded were legion, so much so that several commanders asked them to leave the field on their own rather than wait for care and compassion. It was time for battle, for bloodshed. The beast was in pain, it was obvious, but it also seemed to me that it would quickly get bored and turn its back on us without having the opportunity to inflict a fatal blow on it. I glanced back. The Mega-Laser would not be ready (what a surprise). A commander screamed his need for reinforcements. Perhaps the authorities would provide a percentage of the reward if we hurt the creature enough.

So I went there. 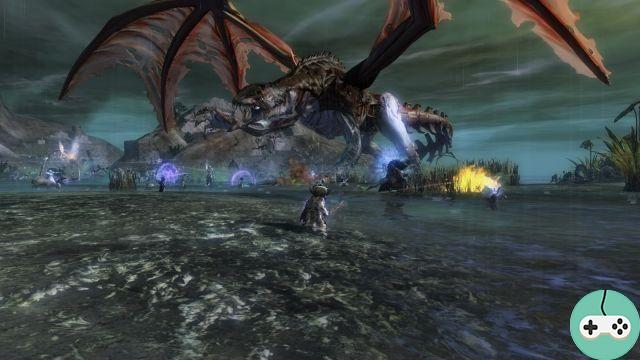 Knee-deep in the mud, I had eyes only for Tequatl, who fought tooth and claw against the combatants. I dove above a wave, dodged two of its powerful poison jets, and was suddenly in the middle of the main group of attackers. The dragon was literally above us. His gaze seemed to want to pierce us, just like his claws which fell nearby. Despite my trembling knees, I sent him a full volley of arrows at my shortbow. Bleed, dragon, bleed! I screamed like my comrades. Then, was it luck or just bad luck, one of the group protections gave way. A rain of venom fell to my right, and the assault commander himself fell, hit, to his knees in front of me. She was a human, and she looked very small in her plate-reinforced armor, a bow of ice in her hand. But what strength! Drenched beyond belief, her legs smoking with poison, she continued to trumpet her orders in spite of everything. I helped her up, and gritting her teeth she continued to fight.

Did I misjudge my movement? Let my guard down to preserve the life of the group? A spray of water threw me to the ground, and I gasped. Poison spread over my chest, and I struggled to get up. When the ground shook with the Dragon's cry and against my will my legs forced me away from the fight, I realized that even with all the power we had gathered, we couldn't defeat him this time. I crawled, wounded like so many others, right behind our lines. Turrets fired continuously, defenders shot down monstrosities that sprang straight from the depths, and Tequatl's fighters died. Until the latter chooses to avoid the fight, that he decides to come and appropriate this rotten land to the bone next time. He taunted us by taking off with all his power, and crossed the sky, sinking to the south.

The fight was over. And we were dazed, dejected. The dragon had come, and had ravaged us. Was it even possible to beat him? For more than a day, doubt had assailed us. New commanders came to join our attempts, in such impressive numbers that a real staff seemed to have been established in the middle of the marshes, between the tents of the combatants who did not hesitate to camp on the spot to attend the next battle. From all corners of Tyria, some Charr coming on foot from the Iron Marshes, their bundles on their backs. Tequatl was attacking the coast, the dragon wanted to destroy the morale of the entire Jade Sea. And always more numerous, the combatants took their marks, set out again in combat.

Because no dragon can defeat us.

I'm just waiting for the moment to see the beast's bulging eyes again, to stand on my sturdy Norn legs, and say:

We can't wait for the continuation of his adventures!

Check out his other Fantastic Stories on blog.

My name is Eric Bottlaender. I live in Colmar, Alsace. A region in which I also work as an engineer. I am 26 years old, and I have been writing various and varied fictions since the high school period. An avid reader, I have little taste for classical literature. My inspirations are in adventure novels, in the detective and techno-thriller without forgetting fantasy. Learn more!