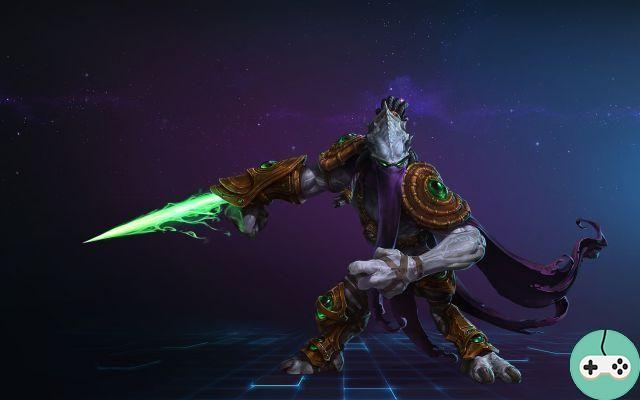 Zeratul is an assassin capable of camouflaging himself in order to position himself discreetly on the battlefield and eliminate priority targets at breakneck speed. Capable of many things, he was capable of even more wonderful things before. But let's not be sorry, he remains one of the best heroes in the game today! We meet today for a guide on Zeratul, the Black Prelate! 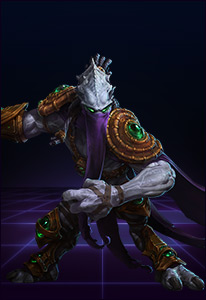 The enigmatic Dark Templar Zeratul serves the Xel'Naga. Even though he expertly wields the power of the Void, it is his wisdom that has earned him the respect of the leaders of the Koprulu sector, despite his penchant for overly theatrical entries. In Heroes of the Storm, Zeratul is a formidable melee assassin and capable of making the most visible plays in the game. He is also certainly one of the heroes with the highest skill-cap in the game.

Camouflage Permanent (Passive): Staying out of combat for 3 seconds automatically camouflages. Revealed in case of damage taken, attack or channel.

prune (A): Deals heavy damage to nearby enemies.

Point of Singularity (Z): Fires a spike of singularity that sticks to the first enemy hit. She deals heavy damage after 1 second and slows him by 40% for 3 seconds.

Transfer (E): Teleports to the targeted position. Using this ability does not break stealth.

Void Prison (R): Slows time to the point of almost stopping it in an area, making all enemies and allies invulnerable and incapacitated for 5 seconds. You are not affected. 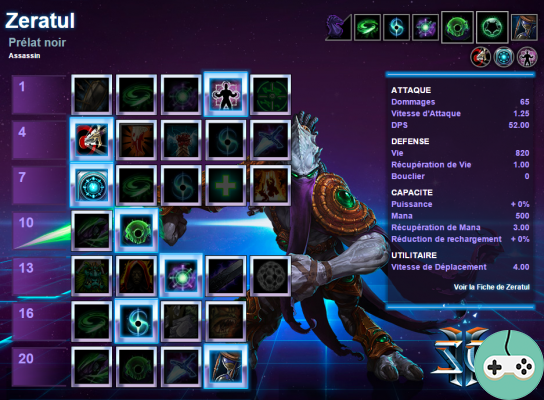 This build is very focused on damage to heroes, so your role will be to inflict maximum damage on the hero, while maintaining good survival. Your ability to make plays will be revealed, so pull out your winner's outfit, you will shine brightly!

Why? A talent that will give us a strong regeneration of life, thus avoiding having to return to the Altar of Storms permanently. Since this talent changed, it's a regeneration buff after 15 orbs have been picked up. Before, it's the other way around. So ... catch them all!

Concentrated attack : Every 10 seconds, the next Basic Attack deals 75% more damage. Each Basic Attack reduces the cooldown by 1 second.

Why? You gain instant burst by typing hard, all at once. Good thing: our objective is to hit the priority targets very quickly, very hard!

concatenation : After using an ability, increases the damage of the next Basic Attack by 40%.

Why? This is the talent that adds the most damage: combined with Concentrated Attack, our first attack out of the camouflage will not be a delicate caress on the cheek of our enemies!

Void Prison (R): Slows time to the point of almost stopping it in an area, making all enemies and allies invulnerable and incapacitated for 5 seconds. You are not affected.

Why? Certainly one of the most powerful ultimates in the game if used correctly, it will allow you to make coffee, with or without sugar, ironing and especially cleaning in the opposing team. Able to isolate a target by imprisoning the rest of his team, save a building ... This ultimate is far too powerful to be overlooked. He will however make the difference between good and bad Zeratul. (No, I will not refer to the Strangers! ... Okay, there you go.)

Wormhole (E): For 3 seconds, Transfer (E) can be activated again to return to its starting point.

Why? This talent gives us superb survivability, allowing us to jump into the fray, execute our target, and quickly and quietly return to our starting point. A must-have therefore!

Double bombs (Z): Used to cast a second Point of Singularity (Z) for free within 3 seconds after the first and deals 50% damage.

Why? We still gain in burst on several levels: first directly on the spell, but this allows us to make our talent work once again concatenation, and inflict serious damage. Note that the second bomb applies the same slowdown as the first.

Why? This talent allows us to launch our combo twice in a row, to inflict outrageous damage!

You are an assassin, your main role is to inflict maximum damage on enemy heroes. Your ability to stay alive is very good unlike the majority of Assassins. Very mobile, you can easily replace yourself in teamfight in order to maximize your damage on priority targets. Nevertheless, Zeratul requires a lot of training in order to be able to master it correctly, especially in terms of the placement of the Void Prison (R). There is only one solution: practice again and again, and again. And even. 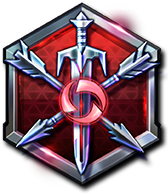 Zeratul is an excellent roamer, you should not hesitate to wander around the map to put pressure on all the opposing lanes. Put your enemies in doubt as to your placement on the map, and you will really help your team gain confidence.

In teamfight, wait for the right moment to attack fragile and tempting targets. Prowl around the sides of the fight without taking part in it, then jump on your prey when you see an opening. Preferably when the opposing team has used most of their controls on your tanks. Let go of your burst and leave with your Transfer (E)! At level 20, here is your ideal combo:

Be careful though: if you cast your entire combo, it will cost you almost all of your mana (!), So make sure you can cast Transfer (E) in case things don't go as planned! Remember that in general you will want to use Void Prison (R) at one point in the teamfight, and that spell is very mana-hungry, too!

La Void Prison (R) is the Zeratul spell that allows the most plays and shows the extent of your talent, your SWAG what. By putting "out of play" everything that is caught in it, you will be able to coordinate spectacular combos, each more impressive than the next, but you will also be able to save your teammates from devastating spells! Here are a few examples of synergies or an excellent use of the spell:

You will understand, Zeratul works very well coupled with the following heroes:

Most of these heroes have an area ability that can be coordinated with the Void Prison (R) of Zeratul to have devastating effects! Asmodan, Falstad, Jaina et Kael'Thas will have enormous damage easily done, Arthas, E.T.C et Gazleu will easily be able to place their very large controls, while Rehgar et Uther are two excellent supports for Zeratul, as they are able to keep him alive in the midst of the opposing team. Abathur is a good choice in another measure, as it will add immense damage to the Dark Prelate's already outrageous burst.

You now know everything about Zeratul, the Dark Prelate! Be aware that there is another build commonly called "Zeratul AD", but this is a "niche" build which is only suitable in rare cases, and requires a Uther to work perfectly. He also uses Zeratul's second ultimate, Dark Assault (R) !

Go fight for Aiur and have fun in the Nexus!