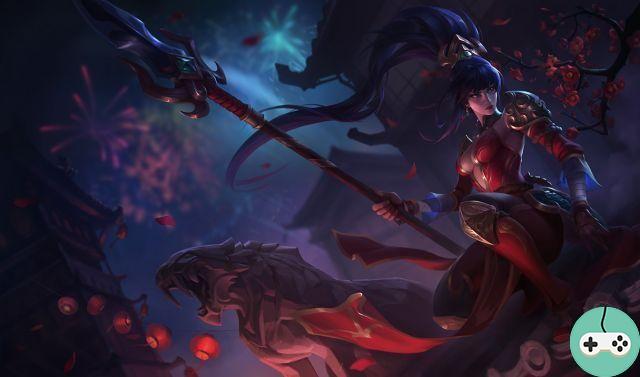 I present in this guide dedicated to Nidalee, an orientation on one of the many ways to play it. In this guide I will explain my way of seeing Nidalee as a hunter who will harass her enemies with her spears and then finish them off in the form of a cougar.

Nidalee is a versatile character thanks to her ultimate which gives her 2 appearances that radically change her playstyle, one at a distance in human form and the other in melee in cougar form. Nidalee's spells mainly have magical ratios, which is one of the reasons why I play her like a mage.

Doran's Ring is a common item for all ranged APs, simply because it's a great starting item (Power, Health, Mana Regeneration).

Take 2 potions simply to avoid dying from the blows of your opponent and to allow you to stay on the way as long as possible.

The totem pole is more than a jewel, you take it but you must also use it to protect your rear: the middle lane is the most easily accessible for you as for your enemies. So put down your totem pole to avoid unpleasant surprises from the opposing jungler.

Buy what you can according to your gold, the best is to be able to get back on the way with a large object, just to outdo your opponent.

As for the Mephitic Codex, it will complete the Morellonomicon, a very interesting item due to its price and the bonuses it offers. If you get the big wand, it will allow you to get Luden's Echo, a very good item that will give you damage, and what's more is area.

To some the boots may seem unnecessary, I promise you just being able to go faster will help you immensely no matter what you do, whether it's to dodge, chase, or just get back on your lane or shift.

Here is the holy trinity, with it your opponents will fear your damage. The interest of owning these 3 items is simple and can be summed up in 3 words: Power, Versatility, Damage.

Rabadon's Headdress will give you the power to boost your spells, the Zhonya will allow you to start a fight and delay the time your allies intervene, and the Staff of the Void will make even the largest tanks cry.

The Abyssal Scepter can be a very interesting choice against a composition with multiple APs or against an opponent who can assassinate you very quickly. Do not hesitate to take it in case of problem. (ex: LB, Annie, Veigar ...).

A good item because it adds damage over time especially if you are used to using your auto attacks. Your knockdown requires an auto attack to activate the spell, the Lich Bane is more than suitable for Nidalee. However against opponents with a lot of controls, avoid this object because you will have very little opportunity to activate it without being punished.

A more expensive but interesting alternative to the Morello, if you have high mana needs. In addition it offers magic resistance.

This item is not unaffordable as some might believe, for its price it is very decent, and will help you "lock" a target by slowing its movements. To take if you do not know how to aim or want to put pressure on the map.

Are you getting hit too hard? Tired of being a victim? An ultimate from Lissandra and you die? The Veil of the Banshee is here, and will allow you to block an initiation spell and make you more resistant.

The last team fight will be the one that will determine which side will win? You must not especially die because you are the only savior of your team? The guardian angel is here! It provides hybrid protections, however, once its asset is used, it is no longer as interesting as another defensive object. You can still take it to inflict psychological pressure and force your opponents to think twice before attacking you.

In very late game (end of game), you can change your wizarding shoes for mercury, sacrifice 15 penetration to have more survival, I think it's a good trade. This can save you from a battle because in the late game a death is decisive and can turn the game around.

Your goal being to inflict the most damage, it is normal that the spell to be maximized will be your (A), to send spears more deadly than the others.

The (E) will be your healing spell, and therefore by maximizing it second, it will allow you to restore more life so we take!

The (Z) will be maximized last, simply because by maximizing it first, it does not offer damage equivalent to your (A) and in addition it becomes less useful than your healing. Because by increasing this spell, its cost also increases while its primary goal is just to control the map and thus prevent the danger of another enemy.

As far as I'm concerned, I choose hybrid penetration runes because I find it very interesting to sacrifice a small part of my magic damage to improve my last hit as well as my auto-attack damage. You can still base yourself on 9 runes of magical penetration.

Armor Seals are a must have if you are just starting out or if you only have 2 rune pages yet, they will allow you to better resist physical damage (Turret, minions, monsters, AD champions). And pair with magic resistance glyphs, it will give you versatile defense.

Personally, I use Life Seals by level, for the simple reason that they become excellent as the game progresses. But if you choose these runes, you will need to adapt your playstyle accordingly and avoid taking too much damage from your direct opponent in the middle lane. It really depends on your playing style.

Magic resistance glyphs are a classic, they make you more resistant to magic damage especially if your opponent is a mage like you or simply to better resist magic damage. 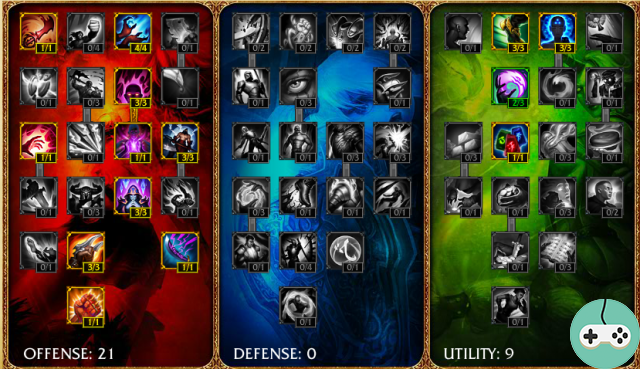 The masteries granting the PA are obviously to be taken.

Magic Bonds and Arcane Blade : Since I self-attack a lot, these are useful masteries.

Devastating Blows & Chaos : You are a mage, you NEED to hurt. Mass has been said.

Centipede : To run a little faster.

Meditation : Having mana is always a plus that can allow you to cast 1 or more additional spells.

Runic Affinity : As a Mid player, you will often have the opportunity to obtain a blue buff or runic bonus, having it longer allows you to be on steroids longer and thus be strong for longer.

Mastery of the character

If you still didn't know it, your (A) hurts all the more the greater the distance it travels. Moving away from your throwing point will not increase damage as the distance is calculated from the point the spear starts from.

In general, when an enemy is affected by your passive, take the advantage because your spells in the form of cougar will have additional effects (reset recovery time, additional damage etc ...). On the other hand, be careful not to rush headlong especially if you do not have the advantage in terms of life points. An enemy may very well let themselves be hit so that you jump on them, just to lure you into a trap.

When running away, don't just spam your Cougar Leap spell, switch back to human form to apply your passive which will get you going faster. Especially when activating your passive, the recovery time of your ultimate goes down to 1.

Don't forget your traps, they certainly don't do much damage, but they do make it possible to secure an area by revealing an opponent walking in it.


Do you want to be up to date and know all the tricks for your video games? In gamesmanagers.com we enjoy playing as much as you do and for that reason we offer you the best tricks, secrets or tips for you to play non-stop. We offer you quality content and always updated to keep you up to date. That's why, in our website, you will find not only videogame guides but also tricks, secrets and thousands of tips so you can play to the limit. Are you ready to get it? Enter now and enjoy your videogame!
GW2 - Great Jungle Wurm ❯

Orcs Must Die Unchained - Oath in the Name of Arctos