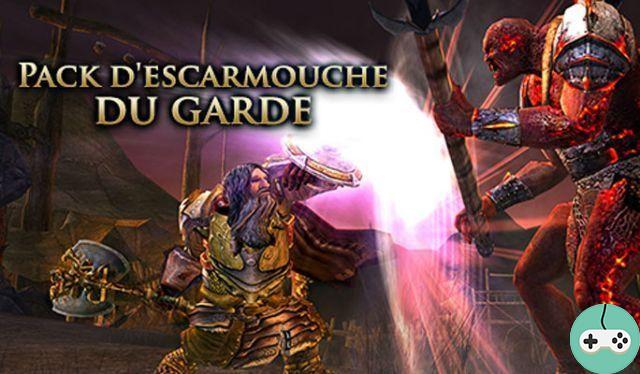 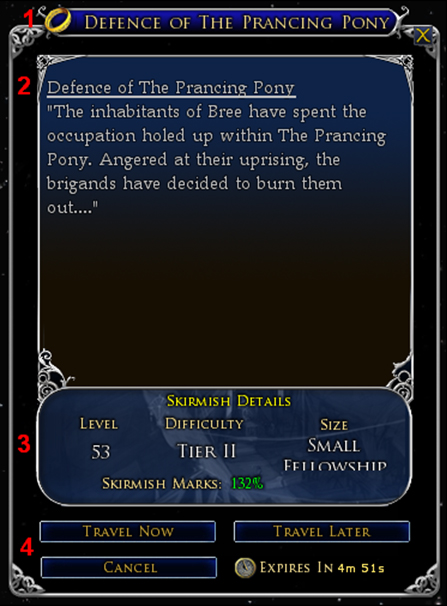 With the release of the expansion, The Battle of the Black Forest, Impeller, the producer of Lord of the Rings Online, introduced an instantiated game system allowing LotRO players to participate in skirmish battles, in other words scripted battles playable in solo, 3 players, 6 or even in raid of 12 fighters of the Free Peoples. These battles, which last from 20 to 30 minutes, allow players with little time in front of them to find a efficient and exciting activity to advance their character.

And it is not nothing to say it.

Originally accessible from level 30, today it is more at level 10, the skirmish system allows your character to receive a lot of experience points (XP) and incidentally, thanks to skirmish marks received as a reward for his exploits in combat, to buy equipment sometimes better than that obtained by questing, which is welcome given the few possibilities we have at this level to participate in group instances on a server as Estel (spanish speaking server and role-play).

In addition, entering a skirmish is not done alone: ​​each player has the right to bring a fighter (NPC) who will help him in the battle and progress with him: it is the soldier, whose performance can be refined by first giving it a role (warrior for dps cac, protective to tank, herbalist to heal, saga ou hunter for remote dps, porteguerre for buffer and offtanker, etc), and subsequently by purchasing skill traits with the skirmish mentor with our marks (skirmish, therefore: p). As time goes by, the soldier progresses and becomes better in the role assigned to him. We must also always think about improving the level of the soldier with us under penalty of quickly seeing it lose its usefulness).

Finally, the acquisition of experience points for the character is done by killing enemies, of course, but also by fulfilling a certain number of objectives within the instance itself: feats specific to each type of Lieutenant, for example, but above all a daily quest very generous. Imagine: as soon as my minstrel reached his level 30, I chained 7 skirmishes one after the other, nothing else in the meantime, and after 1h30 he was already almost level 32 (it was late , I preferred to disconnect before making the two pending quests which would give me my level).

A word of caution, though: if you are interested in this game system, take part in the skirmishes as soon as possible, it is important not to end up with a unsuitable soldier which will require many skirmishes to be level and struggle until then. An example: my minstrel started at level 30, therefore, with a protective soldier. Everything is going impeccably for him, no chess, the game is exciting. At the same time, my rune keeper only tasted it late (it was my first character) and her soldier has not yet been able to participate meaningfully, thus making the skirmishes really painful for her ...

I think everyone will make their own opinion about the skirmishes, their level of interest, their appealing side or not, and their usefulness in the game and I will not argue to convince any recalcitrant. However, I would say these skirmishes in Lord of the Rings Online are a great way to learn how to play our character, fromexplore their skills and possibilities effectively, just as the battlefields allowed in World of Warcraft for example, as well asacquire the reflexes necessary to master the gameplay linked to this character, to play better therefore, and in particular to understand your role in a group. Today I play almost exclusively a champion who goes through the skirmish box regularly. I would never have acquired the mastery I have of this character with varied skills without the skirmishes since I have very little opportunity to participate in instances and share play sessions with other players. So it is they, these skirmishes, who have taught me everything about my character from the start, and in particular those of Moria which are sometimes a little tense if we do them at the right level. Finally a bit of difficulty!

Imagine a player who chooses instead to play a minstrel, I say that at random ^^ He will spend his time knocking out mob after mob and chain quests and regions using half of his skills. But he's a minstrel, the game's traditional healing class, and we're necessarily going to be asked to heal as a group at one point or another. And there, it will be the disaster because our minstrel will never have had the opportunity to meet Madame Agro and to extract her favors: not only will he not know what treatments to use, nor when to use them, but he will not know no longer anticipate the fights, he will not know the necessary speed of execution, he will not have the reflexes to manage the encounters and ... he will panic when all the enemies in the area are hitting him while the tank and the DPS will look at him with pity, in the distance. And that's not all: if a good minstrel knows where, when and how to heal his group, the excellent minstrel will know how to improve it and participate offensively in the fights without neglecting the healings. And that ... that doesn't just come by itself.

The skirmish allows realize quickly of our role and the mechanics of the game who is associated with this role. Waiting for agro, healing, buffering ... each action directly makes a difference in the fights and the learning speed, I believe, is based on that of the experience points. For my part, although I already have a long experience of healer behind me with WOW and SWTOR, I learned more about offensive heal in LotRO last night in 1h30 than in almost a month of play ...

Hope the message got through ^^

Binaries - Are your reflexes good?