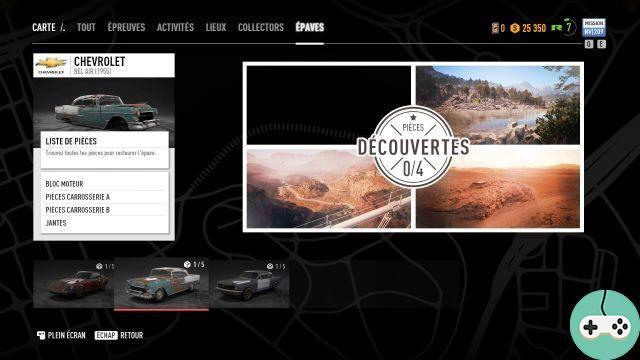 As you kill league bosses, you will have the opportunity to collect wrecks. Check that you have advanced enough in the quests before going there because the coins will not appear before.

Five in number, these old vehicles have to be assembled, first by finding the chassis, then by adding the four complementary parts. All of these pieces are scattered around the map, with the only clues being pieces of map. If you don't feel like searching, here's the complete video guide to these wrecks for you.

Once all the pieces in your possession, head to the garage to reassemble the cars according to one of the five types: Drift, Drag, All-terrain, Mission or Race. For more efficiency, it is advisable to reassemble one of each type. Wrecks when upgraded can go up to 300, which unlocks a Super Build for even more visual customizations.

To unlock access to this wreck, it is necessary to complete the rest of the Mission quests.

To unlock access to this wreck, it is necessary to defeat the league boss La Catrina (quest continuation of Race).

To unlock access to this wreck, it is necessary to complete the rest of the Offroad quests by defeating the league boss, Udo Roth.

To unlock access to this wreck, it is first necessary to complete the Drift quest line by defeating the Shift-Lock boss, the Underground Soldier.

To unlock access to this wreck, it is necessary to complete the quest line of Drag and defeat Big Sister, the boss of the Riot Club.

Do not hesitate if you encounter any concerns!

SWTOR - In the shadow of the Hutts ❯