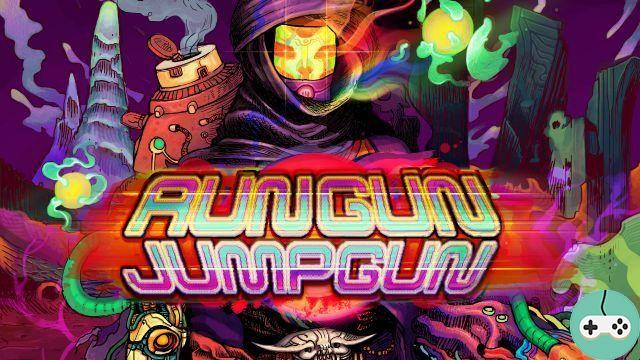 RunGunJumpGun is a shooter / runner developed by ThirtyThree and published by Gambitious Digital Entertainment. 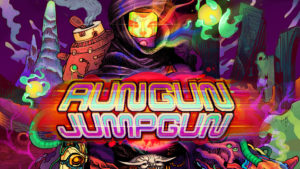 The title of the game, RunGunJumpGun, sums up the game perfectly. The game takes place in a solar system that is about to disappear due to the death of its sun. We take the orders of a "collector" who must recover as much as possible of Atomiks, a kind of galactic currency which seems to have a very great value. 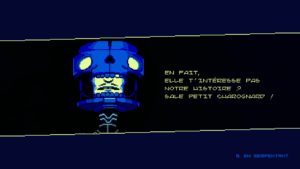 The game has three worlds each with 40 different levels and our little collector will have to travel through these sinking and dying worlds. However, the inhabitants do not intend to let him steal the Atomiks without defending them! 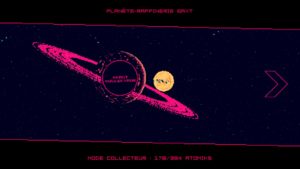 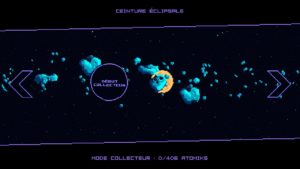 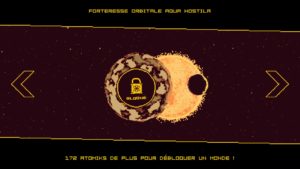 The story develops little by little by completing each level. Of course, this is not a story worthy of a role-playing game and that is clearly not the point of this kind of game, but it does have the merit of being there. Humor is omnipresent in the title, which allows you to smile a little after having restarted a level dozens of times and wanting to throw your controller, your PC and your desktop out the window. 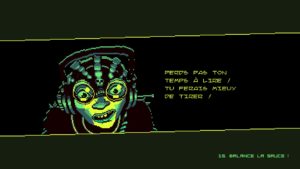 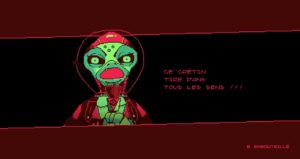 It's not my fault, they want to kill me while I plunder you! 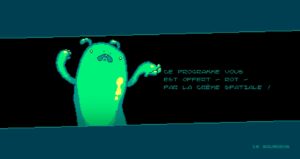 Advertising and sponsors… Present throughout the universe.

We therefore find ourselves at the controls of a collector, finally, "we find ourselves in control", it is very quickly said, the game is played with ... two buttons only! One button to fly and one button to shoot. Flying is actually shooting down, propelling the character into the air and the other button is shooting in a straight line. The gameplay is therefore extremely easy and quick to learn.

The character will automatically advance in the table, the player will have to use the flight and the shooting in order to make their way there while collecting as many Atomiks as possible. It sounds extremely basic, but the levels become, as we go, extremely complex and twisted, which can cause the player to start over 10, 20 or even 30 times the same level to even get there. at the end, without necessarily collecting all the resources.

The levels are full of traps, mechanics, turrets, ships and a whole bunch of other things that slice, slice, burn, disintegrate, crash and more! The game has an excellent climb in difficulty, which is quite poorly balanced as a rule, but not at all here.

The first levels are quite simple, it will usually suffice to move forward and, from time to time, to make a few small flights and to dodge the shots of cannons and a few rotary saws and other pikes. 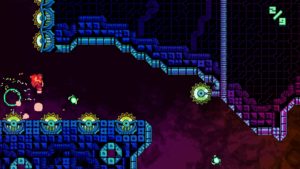 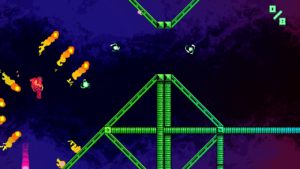 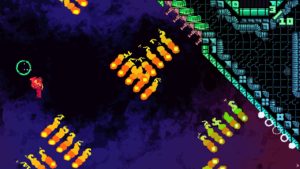 From the second world, things get tough. The top and bottom borders of the level will be "open", which will allow players to be able to climb to the top of the board and reappear at the bottom and vice versa by dropping in order to reappear at the top. Flamethrower turrets and ships will also appear. 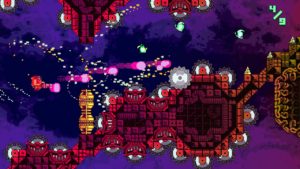 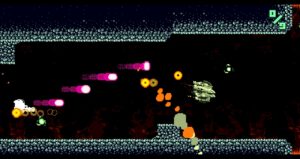 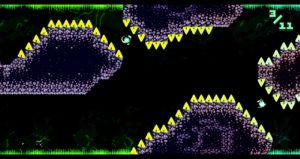 The third world offers a "gravity reversal" (on top of all the other fun things already in the previous worlds, of course!) 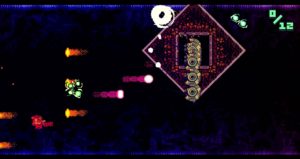 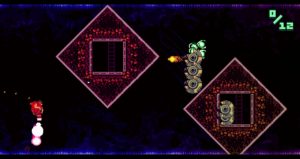 You will also be entitled to a summary of the total number of your deaths, which very quickly rise to several hundred all levels combined.

I am not particularly a fan of this type of game in general, but I admit that it is not, unlike other games of the genre that I have been able to play, frustrating, because we just continue / start over levels very quickly without the slightest pause, there is no time to "feel sorry" or "bitch". We die, we leave immediately! We finish a level, we have a small fragment of the scenario in a few lines and presto, we move on to the next level!

However, there is one small (well, very big) detail that bothered me during my games: the lighting effects. The game is full of shaking images, flashes of light, flickering ... Which, personally, gave me an excruciating migraine at each of my gaming sessions, ultimately not exceeding half an hour at because of that.

I am not a fan of this kind of game, I have said it before, but I admit that I am having fun here. Unlike many other games, death is ultimately not very frustrating, because we immediately follow, without transition screen, loading, confirmation messages. The lifespan is quite huge with the 120 levels requiring you to collect all the Atomiks, as well as the higher difficulty modes if you harvest all of them. However, the visual effects are really very aggressive with the build-up and layering of incessant flashes, flickers, screen shakes and the like.