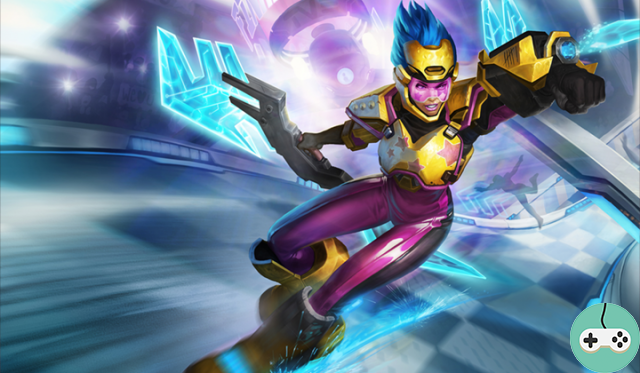 Revv is a champion of blastball, the popular sport at Meridian Gate. A remarkable goalscorer, she scored many points during a hostile foray from the Black Sun Shard. Let's see what our champion is designed with! 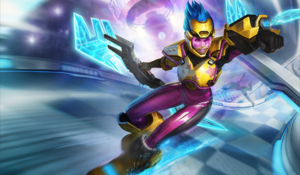 Revv is an assassin with great mobility and devastating skills for isolated targets. In this regard, she has a certain penchant for provoking any Sentinel to a duel (with the camera drones that follow her, you have to keep her reputation). Once her target is in sight, she cannot escape Revv.

Slash it ! : Revv's first basic attack against a target slows them down and deals bonus damage based on the target's maximum health. This effect has a cooldown of each target.

Loop it ! : Revv gives a boost with his boots and rushes forward. After a short delay, she can reactivate the skill to return to the original position.

Spike it ! : Revv throws three needles with his gauntlet, hitting the closest targets. Damage is reduced if a target is hit multiple times.

Whip it ! : Revv launches an energy whip, binding to the target. If the link is not broken after 2 seconds, the target is immobilized and takes additional damage.

Blast it ! (Ultimate) : Revv rushes forward and throws a Blastball at the nearest enemy Sentinel within range. She can then throw 2 more balls within 10 seconds of casting the skill, before the cooldown is triggered.

SWTOR - Presentation of the planet Makeb

Add a comment from Shards of War - New Sentry: Revv