Invasions are one of the main facets of Skyforge's high-prestige content. They are for the moment the only source of the sparks necessary for the progression in the Divine Atlas and will allow in the future the acquisition of the divine specializations. These invasions are periodic pseudo-dynamic events whose success (or failure) will affect the entire server. These events are made up of phases, each giving access to various content. 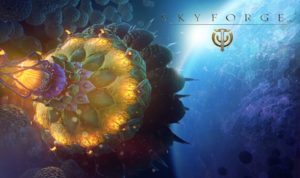 In this article, we'll take a look at what content is offered during the different phases, how to access it and what types of rewards you can get from it. So far, we've only had access to two invasion phases on our server. This article will be updated as we gain access to other phases.

For now, the invasion content consists of 2 types of adventure:

Before going into the details of the invasion phases, we will talk about resistances. These are of several types and are visible in your character sheet. Each enemy race attempting to invade Aelion will have 3 of these resistances associated with it, summarized in this table:

These will have 2 effects in play:

To increase your score in these resistances, you will need to be in a Pantheon that has built its Aether Projector. If not, you will still have the opportunity to participate in basic invasion adventures using Etheric Barriers. These consumables will give you a resistance of 80 in the 3 necessary for a duration of 20min. You will get 4 each day from the Adept's Reward Chest at the foot of your statue in the Hall of Greatness. These consumables cannot be stacked with resistances from the Aether Projector. 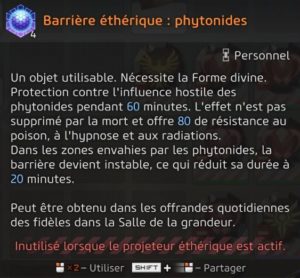 When your Pantheon has built its Aether Projector, you will have access to the "Invasion Talents" tab in the "Bonus" page of your Pantheon interface. This is where you can develop your personal resistance. The first level (80) is free for the 5 types of resistance.

To increase these resistances, you will need knowledge and energy modules. These are obtained through an adept quest, as a daily gift as soon as you have unlocked your Divine Form as well as at the market. For knowledge, you will get fragments (kind of chests) on the bosses in the invasion missions. By opening these, you will recover 3-4 knowledge of the resistances associated with the invasion (with a 20% chance to obtain 25 of each). 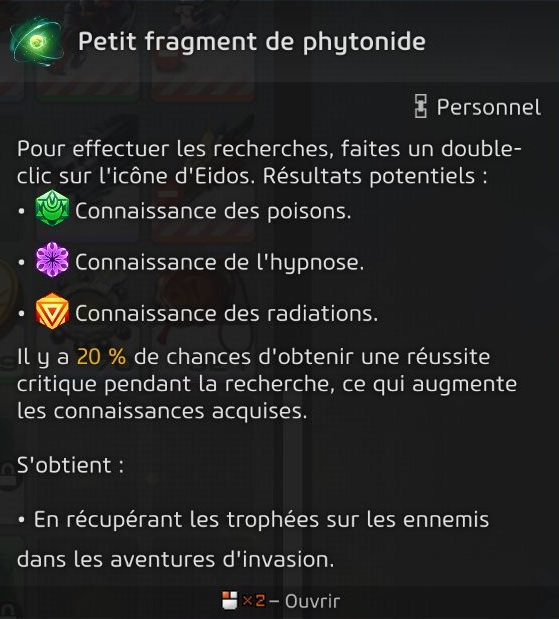 There is a weekly limit on this knowledge (Source of Ether). Once you have gathered the elements necessary to improve a resistance, you just have to launch it, a process taking 48 hours (decreasing with the level). It should be noted that the cost in knowledge increases with the levels while that in energy modulus is decreasing (500 for the level 1, 300 for the 2).

Each type of invasion has its own Atlas, independent of the main Atlas. You will have access to it as soon as you have obtained your first sparks from the invasion in question (see how to obtain them below), via an object that you will receive at the same time as these that you will have to use in your inventory. These sparks are also the only way to unlock nodes in this Atlas. In the latter, you will get stat bonuses for basic nodes, bonuses specific to the invasion race (damage bonus on enemies of this species ...) as well as symbols. This Atlas and the associated bonuses are active at all times, even after the invasion is over. On the other hand, it is only during the latter that you will be able to gain sparks, and therefore progress in the Atlas. 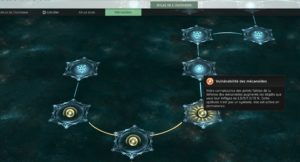 The enemy ships have been detected in orbit, the invasion will begin soon. During this phase, you will see an "Invasion Alert!" in the Divine Observatory, with a countdown indicating the start of the next phase lasting 48 hours. 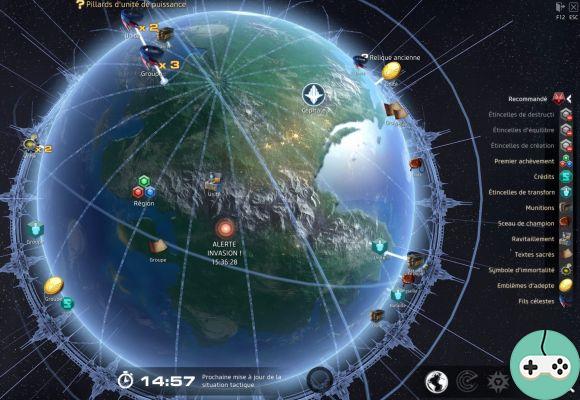 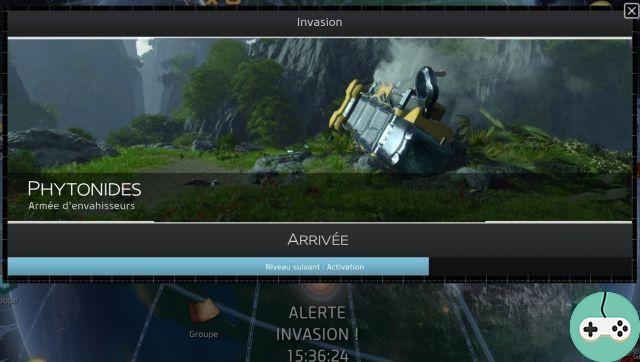 During this phase, the classic missions whose enemies are those of the invasion race will switch to the special invasion mode. They will be slightly modified (additional enemies, special bonus objectives) and offer you a new type of reward: invasion tokens. These are a currency appearing in the tab "Valuables - Invasion Knowledge", are unique to each invasion and are not subject to a weekly limit. These will serve you in Operations (see below) and will also bring you sparks from invasions. Throughout the invasion, you can find a progress bar by clicking on the invasion icon in Divine Observatory. This bar will tell you at what score of chips (at the bottom of the gauge) you can get sparks. 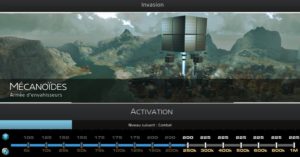 This bar is common to all phases of the invasion and will be reset for the next invasion. If you manage to fill it completely before the end of the invasion (1 million tokens), you will be able to obtain a total of 3000 sparks, which, I reassure you, is not enough to fully unlock the Atlas. It will take several invasions to get there.

The number of tokens you will get at the end of a special mission depends on the rank with which you complete the mission as well as its difficulty. An S rank will bring you between 2000 and 4000 of these tokens (the group bonus is applied, so go with your friends), an A rank will bring you much less (barely 1000), donations should not be neglected. bonus.

During this phase, the invaders have landed and you will be able to participate more actively in the defense of Aelion. There are 3 types of possibilities to help push back the enemy.

During this phase, missions to repel invaders are available. To access it, simply click on the Invasion icon at the bottom right of the Observatory (Divine Form required). 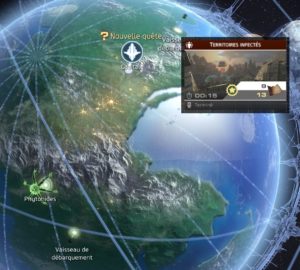 There are currently 3 Unit missions (for 1 to 3 players) and 2 Group missions (5 players) available, which alternate each day. 3 of them only require a score of 80 in the associated resistances, 2 require higher resistances.

These missions grant sacred texts, equipment and knowledge (via fragments). In addition, depending on the success score of your mission, you can get special rewards:

Importantly, these rewards can only be obtained once per adventure for the duration of the invasion. If you roll a C on your first attempt, you will earn all 10 Sparks and if you score an A later, you will have the Reliquary and the additional 10 Sparks. If you had achieved rank S the first time around, you would have gained 20 sparks, the reliquary and the costume. 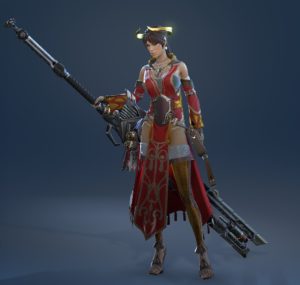 These missions will also bring you invasion tokens.

You will also have access to missions for your followers. The first is available to all players with access to the Order system, lasts 1h30 and brings you victory medals, with which you can buy more powerful consumables (and in the future, the double specialization). The second mission (duration 8h, high difficulty) is only available for players who have unlocked their Divine Form and will bring you back faithful and offerings as well as Faith. They can only be done once per 8 hour slot (i.e. 3 times per day).

Operations are a form of daily mini event. From the moment you earn your first tokens, you will be randomly placed in a group with 39 other players and you will have access to the operation interface, available on the Aelinet (an in-game interface will arrive soon). 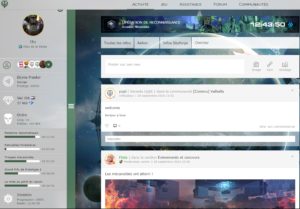 Operations will require you to collect tokens, giving you a daily goal to achieve. Completing the latter will bring you a reward (orange medal in the image below). Then your group will also have a chip objective (blue progress bar). If, at the end of the day (midnight), your group has fulfilled their contract and you have fulfilled your personal goal, you will earn additional tokens (not counted in the next day's transaction). In addition, each of the 40 players in your group will be ranked according to the number of tokens they have obtained during the day. If, at the end of the countdown, you are in the top 10 of the group (green progress bar) and your personal objective and that of your group are accomplished, you will earn Invasion Sparks. 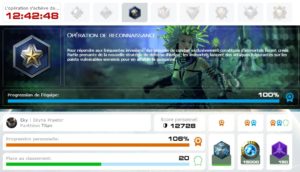 In addition, finishing in the top 10 will move you to the next higher division (icons at the top, to the right of the counter), with greater rewards but bigger objectives in terms of tokens. Once you have reached a division, you cannot descend from it. If you fail to finish in the top 10, you will still be in the same division the next day, so you can try again.

No more info on this phase, we'll know next week.

This is the end of this invasion guide, which will be updated.

Are you going to defend Aelion?