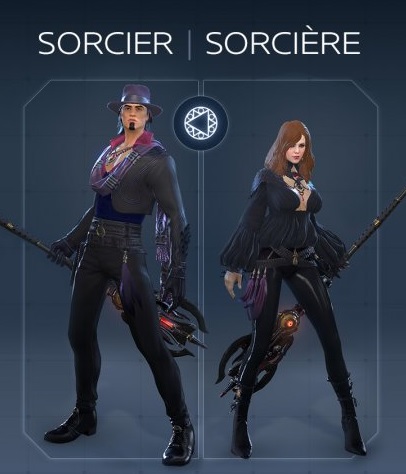 Note: This Wizard's Guide will focus on the group PvE aspect, although most of the information here applies to single player and / or PvP play. This guide will be updated as the class evolves. The first 2 parts of this guide will describe each skill and talent. If you want to get to the point, go directly to the "Build and Rotation" part to see the distribution that I recommend as well as the rotation. 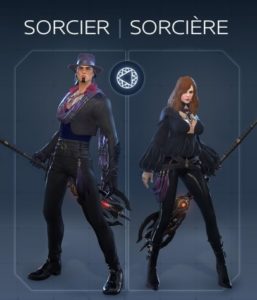 The Sorcerer is a Mage class from Skyforge. Equipped with a staff, the latter controls ethereal crows that he throws at his enemies in order to inflict damage over time. His role in a group is that of distributor of damage and he is currently quite sought after in raid for his skill "Volatile Curse" which allows, with a good organization of the group, to inflict a massive amount of damage in a very short time. The Wizard is also very mobile, which makes him a class of choice for solo adventures. Its energy resource is Magic, which recharges over time.

In order to facilitate understanding, you will find here a summary of the terms that I will use later (especially for the uninitiated). Reading this article may be helpful if you are new to the game.

DPS: Damage Per Second, represents the amount of damage done by your abilities. Also said of a class whose role is to cause damage.

Mono: Single target, qualifies skills that only hit one target.

AoE (or AE): Area Of Effect, qualifies skills affecting an area or a group of enemies.

Mob: Mobile Object, a small name given to enemies.

Burst: Ability to do a lot of damage in a short time but not always usable, opposed to sustained damage. Also said of skills temporarily increasing your damage or that of one or more of your allies.

Channeled: refers to a skill whose effect will last until you release the key or a maximum time. In general, you have to channel your skill to the end to get the most out of it.

Competence I, competence II…: defines the level of workload for the competences concerned.

Buff: Temporary improvement on your character, increasing his abilities (bonus damage, statistics, speed ...). Conversely, we have the Debuff. 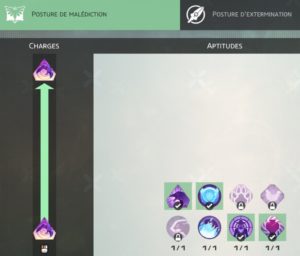 Launches ravens at the target, dealing damage over time for 10s. Cumulative 3 times. A full charge of the SG will apply 3 charges.

Spreads Filth for half and Aging for its entire duration to enemies around the target. Also increases the diameter of Flight of Crows.

Changes the posture of the Sorcerer.

Deals damage to the target and enemies within 6m of the target for 8s. 20s of CD. Costs 300 Magicka.

Gradually slows down the target. 40s of CD.

Note: The following skills are accessible in both postures

Ultimate skill. Deal heavy damage to enemies in a large area in front of the Sorcerer, scaring them and applying 3 levels of Taint to them. 10min of CD.

Execution of the Sorcerer. Recharge Magic.

Only usable if the target is under the effect of Taint. Deals damage based on the number of Taint effects. Activates pulse charging. Costs 40 Magicka.

Only usable if the target is under the effect of Taint. Consumes all the effects of Taint and deals damage proportional to the number of effects on the target. Compensates for some of the damage Filth should have inflicted. Activates pulse charging. 9s of CD. Costs 100 Magic. Triggers a change in posture.

Changes the posture of the Sorcerer.

Only usable if the target is under the effect of Taint. Consumes all the effects of Taint and deals damage proportional to the number of effects on the target and enemies around. Compensates for some of the damage Filth should have inflicted. Activates pulse charging. 9s of CD. Costs 140 Magicka. Triggers a change in posture.

Only usable if the target is under the effect of Taint. Channeled skill dealing damage to target over 5s. Force the wizard to stand still.

Over time, loads of this skill will appear above your action bar (maximum 6). A single press of the key will send all available crows in succession to the target, dealing damage.

Summons 3 panthers, each heading towards 1 enemy within 15m (different if possible). Deals damage and stuns the target. Costs 160 Magicka. 40s of CD.

I tend to prefer the Emissary, which doesn't cost Magicka while dealing higher damage. Additionally, the Panthers' stun effect is useless against bosses in PvE.

Place a circle on the ground with an 8m radius dealing high damage for 8s. Costs 200 Magicka. 1min30 of CD.

The cost / damage ratio is very much in favor of the Ring.

A cat runs towards the targeted location, leaving a stunning trail any target crossing it. 15s of CD.

Can only be used on a monster. Places a shield on the target for 7s. If the latter is destroyed before 7s, inflicts massive amounts of damage to the target.

Volatile Curse is currently in high demand in raid-type content.

Transforms the target into a chicken for 6s. The latter will not be able to do anything other than move during this time. She has more than one shield, the transformation ending if it is destroyed. Costs 150 Magicka. 1m20 of CD.

Enchant enemies in front of the Sorcerer for 4s, incapacitating them. Costs 150 Magicka. 40s of CD

These 2 skills are very situational, I never use them. But bewitching seems to me the most useful in groups, allowing to control large groups of enemies, giving the tank a few seconds of respite. 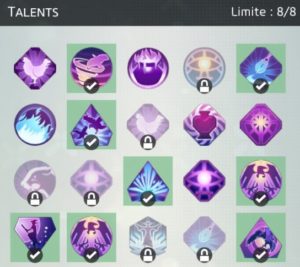 Increases damage of Raven Steal and Ring of Fire by 20%

A good damage bonus on often used skills. To take.

Like all execution talents, it is hardly usable in group PvE. In addition, the effect is not particularly large.

Evil Eye increases the duration of checks on the target by 40%.

Rather PvP, way too situational in PvE.

The damage of Living Aid and Emissary of Filth is increased by 12% per Filth effect on the target. Sorcerer's Fire damage increases by 10%.

The 36% bonus for Emissary justifies taking this talent.

Situational, and I prefer Ring of Fire for damage.

Reduces Transformation CD by 50% and triples the shield value on the transformed target. At the end of the effect, remove Taint from the target if any.

Could be useful in some situations that I haven't encountered yet.

Double the duration of Enchantment on monsters

It's not funny to grow old

Evil Eye does not work on bosses. More PvP.

No question to ask. To take.

Epidemic spreads Filth throughout its duration.

No question, to take.

Flying on a Broom

Adds to the mobility of the Sorcerer, one of his main weapons. To take.

If Filth is spread by Plague, affected enemies become Frightened for 2.5s. The same target can only be affected every 40s.

Quite useful in solo, I am more mixed in a group, this talent tending to scatter enemies.

When the Wizard's health drops below 25%, he becomes invulnerable for 10s. 4min of CD.

Increases the Sorcerer's survival, which is rather practical given his low health points.

I do not recommend the use of Aide Vivant.

Increases the damage of Taint, Explosion of Darkness and Extermination.

The Sorcerer's playstyle will be based on DoTs as well as on his mobility which allows him to compensate for his very low health. For the build, I recommend the latter:

For the single target rotation, I'm going to suggest an engaging rotation, which I think does the most damage.

This first rotation will have already eaten up a significant portion of your Magic. It should be noted that it is possible to use Explosion during the activation of Ring of Fire, causing the latter to place itself anyway, saving you a few seconds. After this opening, I recommend the following rotation to regenerate your Magic:

Emissaries (one press is enough)

After that, you will find yourself in a lot of magic.

The rest of the rotation will consist of using your most powerful abilities (Raven Flight, Ring of Fire, Emissaries and Dark Explosion) as soon as they are available, which will require you to have the necessary Magic (so d (have used Dark Ritual beforehand) as soon as the CD of these skills is finished. The basic rotation will consist of 3 Filths then Dark Explosion (or Killer Crows while waiting for the CD to be completed). As a general rule, use Dark Ritual as soon as your Magic drops below 100 just after a Dark Blast. Remember to put 3 stacks of Filth beforehand. For Emissaries, it is important to use them when your target has 3 Taints and your Explosion is on CD.

The AoE rotation is much the same as the single target, except that you will use Outbreak after putting 3 Filths and Raven Steals on one of the targets and you will replace Dark Blast with Extermination.

I will end this part with a little point on the Volatile Curse. The latter can inflict significant damage if used at the right time. On the other hand, it remains a double-edged tool, which will require good coordination with your Alchemists. Discuss it beforehand to know when to put it on. 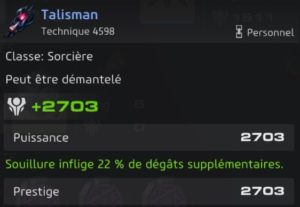 For the secondary weapon, I tend to prefer the one that reduces the damage taken during Dark Ritual, a crucial moment in your rotation that requires you to stay still (and therefore receive area damage). 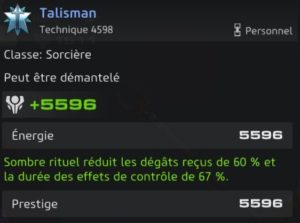 Ideal are amulets that increase the damage of Dark Blast and Extermination. Otherwise, take the one that increases Explosion damage. 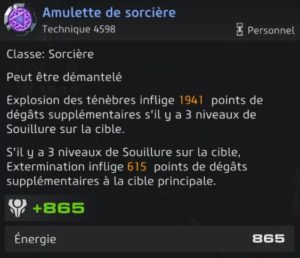 For stats, I tend to favor the Strength / Luck combo, which works great for the Witch. 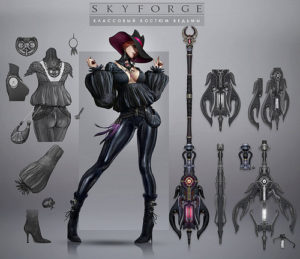 For symbols, your best allies will be Ultimate Strength and Maximum Recoil, which will further increase the Strength and Luck contribution of your rings. Laceration Injury and Lucky Shot also work well with your high Luck score. Then, the Sorcerer symbol (increasing your Filth damage by 25%) pairs particularly well. In general, any other symbol increasing your damage is good to take after these.

This is the end of this Wizarding Guide, if you have any questions, don't hesitate.

Will you become a crows breeder?


Do you want to be up to date and know all the tricks for your video games? In gamesmanagers.com we enjoy playing as much as you do and for that reason we offer you the best tricks, secrets or tips for you to play non-stop. We offer you quality content and always updated to keep you up to date. That's why, in our website, you will find not only videogame guides but also tricks, secrets and thousands of tips so you can play to the limit. Are you ready to get it? Enter now and enjoy your videogame!
FFXIV - Means of transport ❯

SWTOR - Animation: BM - Little lizard will become big… or not

LoL - The Basics of the Game: The In-Game Vision