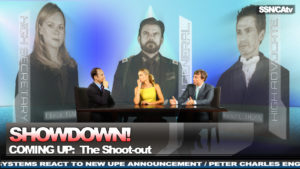 Presenter: You are on CaTV, welcome to the viewers who have joined us. We welcome Kyle Black, political analyst, Sheldi Chen, writer and author of several bestsellers and finally Ben Feller, futurist, to discuss with you this evening the most controversial subject of the moment… But immediately, a new round of SHOWDOWN!

Kyle: Here we are again to talk about the latest United Nations Earth announcement (NUT), they are going to restructure again… what's that called? UPE?

Ben: The Union of Earth's Planets.

Sheldi: What a ridiculous name.

Ben: What ? It makes sense. At present, a dozen planets have a number of inhabitants very close to that of the Earth. And in the near future, that number will continue to increase. All of these people need to be represented. And then seriously, the United Nations body of Earth is no longer suitable.

Kyle: From my point of view, and a fifteen hundred page dossier which outlines the details of the reforms has been made available to the general public so we are still studying it, but it seems that the general organization remains about the same .

Ben: Indeed, the Congress will henceforth be constituted by representatives of each planet instead of the system of Nations which is now outdated. It is a much better system.

Kyle: What do you think of these new positions, a Secretary General for the management of infrastructures, a Marshal for the military forces and a Senior Lawyer to represent the law?

Ben: When a government has to manage so many citizens, it ...

Sheldi: It looks like a big deal from the fascists.

Ben: You are serious ?

Sheldi: Whenever you put the power of several leaders in the hands of a few individuals, one of them will abuse it. Besides, why was Robert Thorn promoted to Senior Lawyer? This man is a complete idiot and should be kicked out of the bar by someone not promoted. He is not even a citizen.

Kyle: Hey enough, it has been proven time and time again that it ...

Sheldi: NO, I DON'T BELIEVE IT. His file may have been tampered with. Do you have any idea how easily ...

Kyle: Look, if it's that easy to hack into federal databases, then everyone's citizenship is counted. What proof do I have that you are really a citizen?

Sheldi: Hey, I served in the air force and did twice the time it took to earn my citizenship. You can say the same, "Censored".

Ben: Indeed, your parents are not involved in any way ...

Presenter: Stay with us for another round of SHOWDOWN! After a very short ad page.